Skip to main content
Bakersfield College's physical campuses are closed. All classes and student services have moved online for the remainder of the Spring Semester.
Stay up to date on the response for COVID-19.

The nurturing of student veterans has always been a part of Bakersfield College’s history. BC’s very first president, Grace Bird (1921-1950), during World War II, wrote 27 long, mimeographed letters to BC students on a monthly basis in the service to keep them close to each other and close to home and BC.

BC’s second president, Ralph Prator (1950-58), was a veteran and BC’s third president, Ed Simonsen (1958-68), was initially hired to serve veterans. The tradition continues with BC’s fourth president, Burns Finlinson (1968-72) who came to BC in 1946 to run the Veterans Guidance Center and BC’s fifth president, John Collins (1972-83) who was also hired to support veterans. 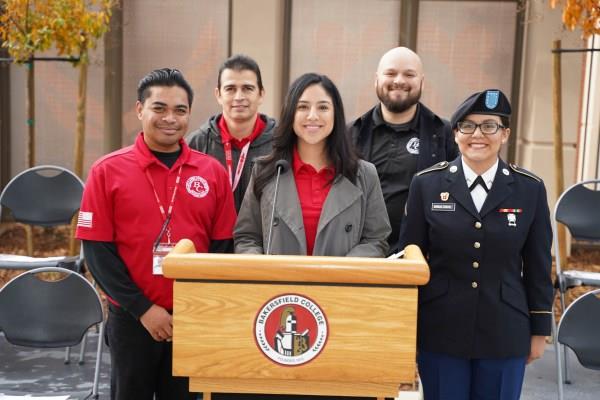 Tucked away in the Bakersfield College archives is a handwritten list of dozens of Renegades who were killed or captured in World War II. From then to now, whether our student-veterans served in wartime or peacetime, the responsibility to educate them and honor them is something that BC has not taken lightly. For the three years or so after World War II, student-veterans actually outnumbered non-veteran students. During and after the upheaval of the 1960’s and the Vietnam War, thousands of veterans enrolled at BC, eager to catch up on lost time.

Since 9/11 more and more service men and women continue to come home to Kern County, to Bakersfield College. For over 100 years Renegades have put on the uniform. When they were ready to trade in their boots for books, BC knew its responsibility. From then up to right now, the mission of Bakersfield College continues… to educate our veterans, mind body, and soul.

Good morning. I am Sonya Christian, the 10th president of Bakersfield College and I pledge to continue BC’s unwavering commitment to our student veterans.

Unfortunately, Trustee Kay Meek was not able to be here today. She has continually been a champion to our veterans and has deep family ties to our military, which she shared at last year’s ground-breaking ceremony.

Joining us today are a number of BC’s student organizations including the Student Government Association with this year’s club president, Samantha Pulido and the Veterans club with their current president, Ilene Garcia.

I’d like to take a moment and recognize those who made this building a reality. Thank you to IBI Architects’ Rick Mellow, Carlo Dazzo and the design team and JTS Construction’s Lee Hawkins and his team who built this new center. Both teams are local to Kern County and we are proud to have partnered with them on this project. 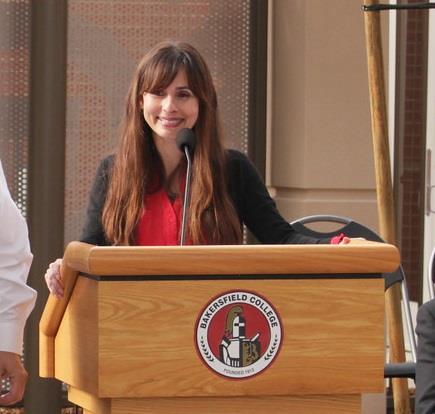 The new Veterans Resource Center is comprised of a renovation of 2,325 square feet of the exiting testing center, and an addition of 3,755 square feet to the interior and exterior spaces. The 1950’s era, poured-in-place, reinforced concrete walls created structural limitations to remodeling the space to accommodate the functional needs of the Veterans Resource Center. The deep foundation created an exceptionally stable load bearing system for the existing building; this is when I learned the phrase belled caisson….

Now, we needed to wrap the new addition around this building on the proposed shallow foundation creating a potential for differential settlement. A creative grading solution was derived to limit this concern.

When you look at the architectural elements and materials incorporated into the project you will recognize many of the characteristics that are part of the standard architectural vocabulary of the campus. For example, the curved roof and the vertical fins at the entry have the same feel as the Performing Arts Center. A unique feature, however, of this building, is the inclusion of the five insignia of the five branches of the US Military – Army, Navy, Airforce, Marine Corps, and Coast Guard which have been screen printed on the perforated metal panels.

Today at the grand opening of the Vernon Valenzuela Veterans Resource Center, I would like to present the President’s Leadership Award to Paul Beckworth. Since the time he joined our BC family as a history professor in 2010, Paul has advocated on behalf of veteran needs. It is no surprise. After all, Paul is a proud veteran himself. He enlisted in the Navy when he was 17 years old. Of course, his parents reluctantly signed for him, but it marked a brave new chapter in Paul’s life. One of his military memories is landing in Saudi Arabia on Christmas day in 1990 in support of Operation Desert Shield, which became Desert Storm a few weeks later. At 19 years of age, Paul had treated his first combat casualties and experienced his first rocket attacks.

In 1993, Paul was honorably discharged and became, in his words, “a civilian.” And just like what many of our student-veterans are doing today, Paul enrolled at a community college and then transferred to earn his bachelor’s degree in secondary education/history and later, a graduate degree in history at Clemson University. Then, in 2010, Paul found his new home at BC. That same year, student-veterans resurrected the BC Veterans Club. Paul soon jumped in and became involved with the campus as it opened the Veterans Lounge in 2011. 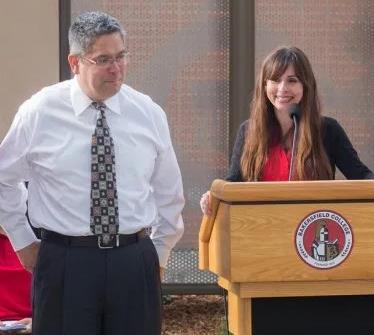 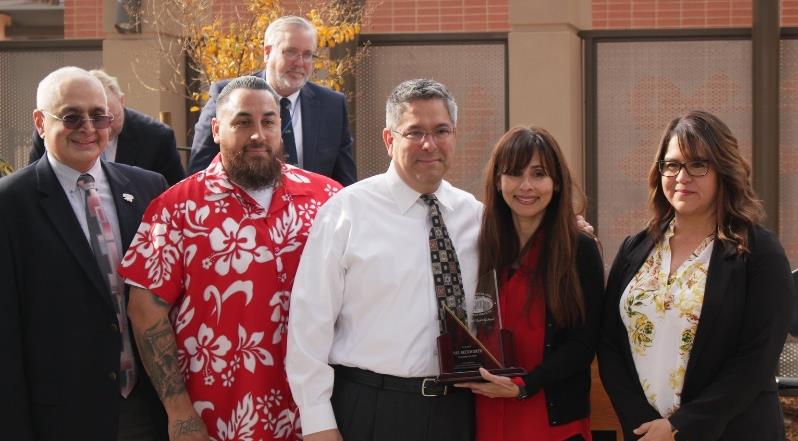 It was in late December 2012 that I first met Paul. It was a weekend and I had just accepted the position of president and I was wandering near the Humanities building trying to locate Kate Pluta’s office and I met this earnest and polite gentlemen who showed me the way with much warmth. From that first encounter I knew that Paul would play a significant role in my life. Over these last seven years, Paul has been an advocate for our student veterans here on campus, in the community, in the state and has also counseled Congressman Kevin McCarthy why the GI Bill was being expanded. He and a group of student veterans were fearless in “occupying” an adjacent room to their cramped space by quietly doing the necessary remodeling work. He has written public letters to our student veterans to our faculty veterans to our staff veterans. He is brave, kind, funny, open, tender, with a fiery passion to respect, honor and support his fellow brothers and sisters from the military.

So as we commemorate the opening of this very special center, we also honor a very special man – Paul Beckworth. 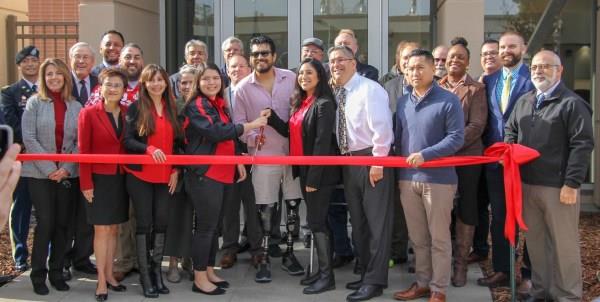 The work for Measure J started two years prior to voter approval in November 2016. The initial phase, the educational phase, led by Bakersfield College was called Building a Better BC when we went out into the community and invited the community to BC to understand the significant need to renovate, modernize and expand a campus that was built in the 1950s. There were hundreds of volunteers who helped us get out the information and get out the vote for BC.

The second phase what the campaign phase led by the BC Foundation and called Yes on J 2016. Thank you to the BC Foundation Members: Jeff Bell, Chairman of the Board, Ken Byrum, Jerry Cook, Fran Florez, Ryan Hansen, Rick Kreiser, Michael O’Doherty, Connie Perez, Jeet Singh, and Marko S. Zaninovich. 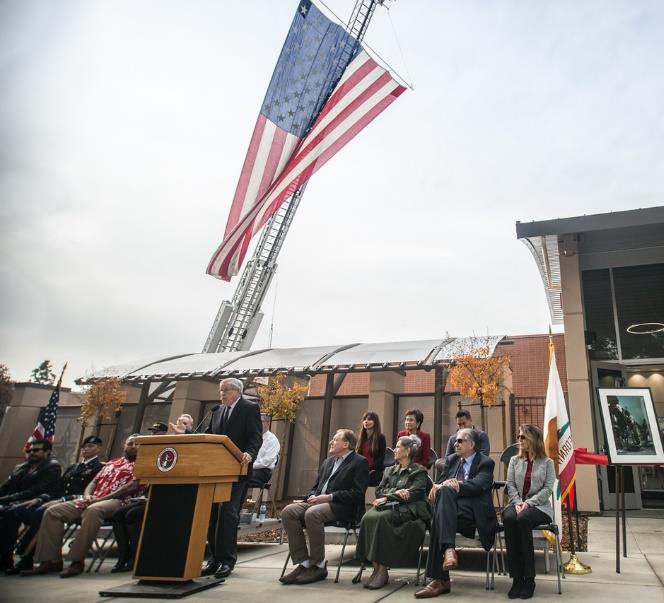 At this time, I’d like to welcome our next speaker, the force behind measure J, the one and only congressman, Bill Thomas!