While it certainly is exciting to shout about a large Full Moon and I don't want to be a party-pooper, but let's take another look at the NASA story that started the buzz. It is posted on the NASA Science News site at http://science.nasa.gov/science-news/science-at-nasa/2012/02may_supermoon/ . The first paragraph designed to get the media's attention says that this May's "full Moon is a 'super Moon,' as much as 14% bigger and 30% brighter than other full Moons of 2012."

That sentence would have been fine if you read it carefully but a little further down the author of the story went a little too far to juice up the story some more. He states that this May's full Moon "is 14% bigger than usual..." (my emphasis) which is what the media is latching on to.

The word "usual" is misleading. Here's why.

Therefore, sometimes a full phase of the Moon will be closer to us than at other full phases. The values of the perigee and apogee in the graphic above are the mean (average) apogee and perigee for the Moon's orbit. The stats of the Moon's orbit are posted on NASA's Moon Fact Sheet. In that fact sheet you'll find that the Moon's orbit does slightly flex over the course of a year, so that the Moon can get as close as 357,000 km and as far as 407,000 km from the Earth. It is those numbers that are the source of the 14% figure used in the NASA story. 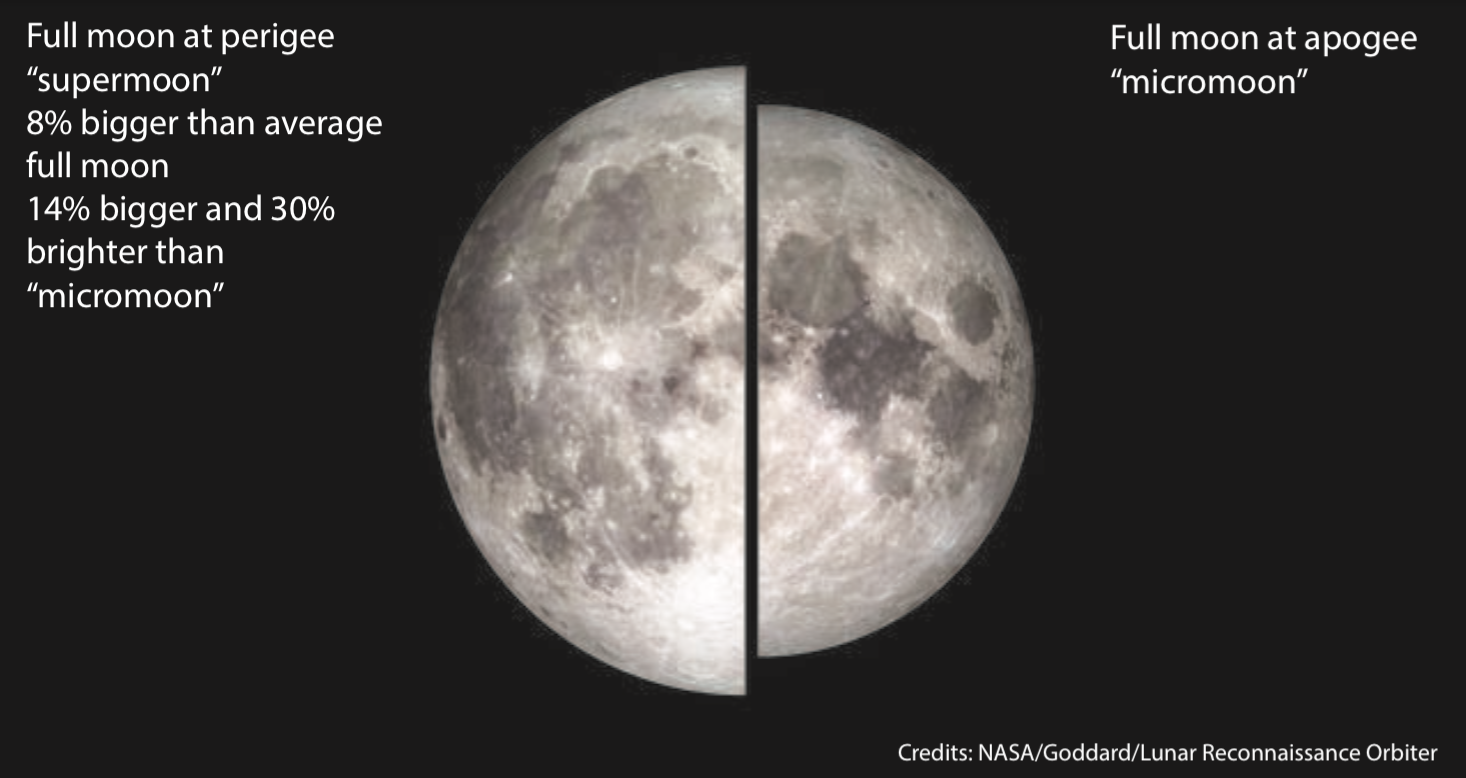 By the way, the New Moon has the same sort of behavior. Sometimes, a new phase (the Moon is roughly lined up with the Sun between the Earth and the Sun) will be closer to us than at other new phases. Two weeks after the "super Moon" of May, the new Moon will be near apogee plus it will be exactly lined up with the Sun so we'll have an eclipse on May 20th. The Moon will be too far from the Earth to totally cover up the Sun so we'll have an annular solar eclipse. As an added bonus, the path of the annular solar eclipse goes right through northern California! Six months later the New Moon will be close enough AND exactly lined up with the Sun to make a total solar eclipse. Unfortunately, the path of that eclipse goes from the northern tip of Australia to a bit north of New Zealand and ends off the coast of South America.

You can go to the Lunar Perigee and Apogee Calculator to get a full year's list of the perigees and apogees of the Moon's orbit as well as the exact timings of the New and Full Moons. In there you'll find that this May's Full Moon is about 8% bigger than the average Full Moon (and so are April's and June's). Near the bottom of the calculator page is a link to the "Inconstant Moon" page that gives you all of the details (and more) about the Moon's elliptical orbit, including why the orbit flexes.

MARS One Thousand One