The start of public evening shows at the William M Thomas Planetarium will be postponed for at least another couple of months as we see how much the Delta variant of the SARS-CoV-2 virus surges.

In our evening sky, the two brightest planets, Venus and Jupiter, reside on opposite sides of the sky. Venus is the brilliant “evening star” in the west after sunset. Tonight, Venus will be just above the bright star, Spica, on the left side of Virgo. You can find Spica by extending the curve of the handle of the Big Dipper part of Ursa Major to the bright star Arcturus in Bootes (“arc to Arcturus”) and then go straight down to Spica (“spike to Spica”).

Venus is brighter than Spica only because Venus is MUCH closer to us than Spica. Spica is actually a spectroscopic binary star—two stars orbiting each other so closely that they appear as a single star in even the largest telescopes. We know there are two stars present because each star produces a set of dark absorption lines (think of a rainbow with a barcode of dark lines) that shift toward shorter (bluer) wavelengths and then longer (redder) wavelengths and back to shorter wavelengths in a periodic fashion and their shift is in the opposite direction of their companion’s absorption lines. The shifting lines have a period of just four days because that’s how long the stars take to orbit each other. The two stars move in noticeably elliptical orbits with an average distance of about 12.2 million miles from each other which at a distance of 250 light years from us, means they blur together to appear as one object.

If you know right where to look and you have your binoculars handy, you might be able to pick out Mercury very low in the west but it’s going to be hard to pick it out through all the smog and smoke layer. A waxing crescent moon will be first visible by Tuesday or Wednesday (September 7 or 8). On September 9, the crescent moon will be next to Venus to make a pretty photo opportunity. The moon will be at first quarter (so it looks like the right half of the moon is lit as seen from Earth) on the evening of September 13. The night before, the moon will be above the orange-red heart of Scorpius, the supergiant star Antares.

In the southeast, you’ll see Jupiter outshining any other star. It will be on the left edge of Capricornus. On the right side of Capricornus will be Saturn. Though Saturn is dimmer than Jupiter, Saturn still outshines any star in Capricornus. The gorgeous rings of Saturn can be seen with even a small telescope because they are made of trillions of chunks of water ice that reflect most of the sunlight that hits them. A waxing gibbous moon will pass near Saturn on September 16 and then near Jupiter on September 17.

The more people we can get vaccinated, the less evolutionary playground we give the COVID-19 virus to innovate and make new variants. If you’re vaccinated, you have a MUCH smaller chance of getting so sick that you need to be hospitalized. BC’s Student Health Center does Moderna on Tuesdays and Wednesdays and Johnson & Johnson on Thursdays for those 18+ and other medical clinics (including Clinica Sierra Vista) and pharmacies also have the vaccine. Check out myturn.ca.gov for the clinic closest to you and please continue wearing a mask when with large groups in enclosed spaces! 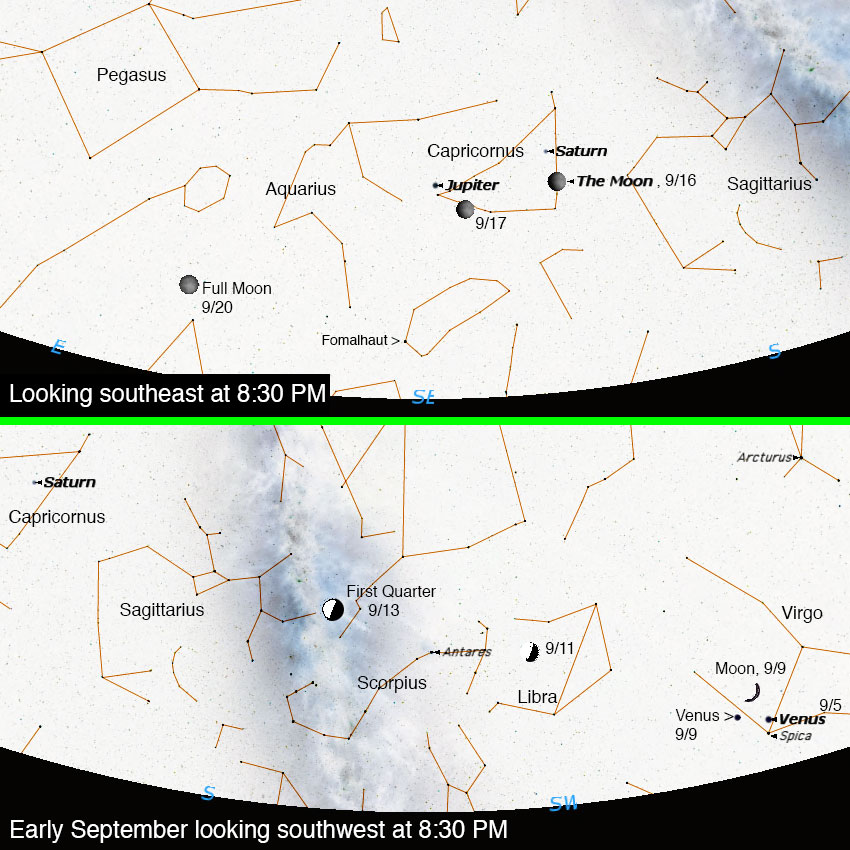