The Mars Rover Perseverance lived up to its name and successfully cached a rock sample for future delivery to Earth after its first attempt a month ago failed. Perseverance went on to collect another sample a couple of days later. The Sampling and Caching System is a very complex separate robotic system with over 3000 parts housed within Perseverance—a robot within a robot.

The rock chosen to sample looks like it comes from a time of sustained habitable environment. The rock sample contains minerals that can be radiometrically dated, so we’ll know more precisely when the rock formed. Salts left behind from when liquid water evaporated are also in the rock sample and those salts could contain tiny bubbles of Martian water. Furthermore, those salt minerals are great for preserving signs of ancient life.

Close examination of the rocks in Jezero Crater has shown that the water that filled the crater was present for a longer time than just a few decades but we can’t yet say if it was there for tens of thousands or millions of years. The sample Perseverance collected last week is probably from a relatively recent layer. The next sample will come from a layer that is probably older, so that scientists will be able to put together a timeline of events in Jezero Crater.

However, the next sampling will take place in November as all of the Mars missions take a break in October for the solar conjunction. That’s when Earth gets too near to the sun’s direction in the sky. The sun puts out a lot of radio noise that could corrupt radio signals going between Mars and Earth. A signal with a command to “go sample that rock over there” could be changed to “shut yourself completely off” with an ill-timed radio burst from the sun. Not a good thing.

Before solar conjunction, the Mars Helicopter, Ingenuity, will take its 13th flight to explore more closely an area of outcrops it imaged on Flight 12. When the images from Flight 13 are combined with Flight 12, they should help the Perseverance team create a 3D map of the area they’ll be driving to.

There was an interesting article on the AAAS Science site about the NASA-funded Commercial Lunar Payload Services (CLPS) program that will be sending ten missions to the moon all within the next five years. The private companies in this venture are not big ones like SpaceX or Blue Origin but ones not making it into the news (yet): Astrobotic, which is slated to send the first lander of the CLPS program in 2022, Intuitive Machines, which will also send a lander to the moon in 2022, and Masten Space Systems (in Mojave) and Firefly Aerospace, which will each send a mission in 2023. The first two landers will go to boring equatorial sites on the near side of the Moon and are solar-powered, lasting just as long as the sun is above the horizon, or about two weeks. Later missions to the moon will concentrate on the more exciting locations at the moon’s south pole where water ice has been detected by earlier missions.

Tonight’s moon will be an almost full waxing gibbous moon. Tomorrow night’s moon will be at full phase. Third quarter phase, when the moon appears half lit up on the left side and rises at around midnight (or 1 a.m. during daylight savings), will be on the night of September 28/29. The sun will cross the celestial equator (the projection of Earth’s equator onto the sky) on September 22 (at 12:20 p.m. to be more exact). That will officially start our season of fall and I do hope our daytime high temperatures will reflect that fact!

In the south you’ll see Sagittarius, Scorpius, and Ophiuchus around the bulge of the Milky Way (see the star chart below). The galactic center is just above the spout of the Teapot part of Sagittarius.  Higher up in the sky is the Summer Triangle formed by the brightest stars of Cygnus (Deneb at the top of triangle), Lyra (Vega at the right corner of the triangle if you’re facing south), and Aquila (Altair at the bottom of the triangle, closest to the ground).

If you’re vaccinated, you have a MUCH smaller chance of getting so sick that you need to be hospitalized in Kern’s already packed hospitals. Check out myturn.ca.gov for the clinic closest to you and please continue wearing a mask when with large groups in enclosed spaces! 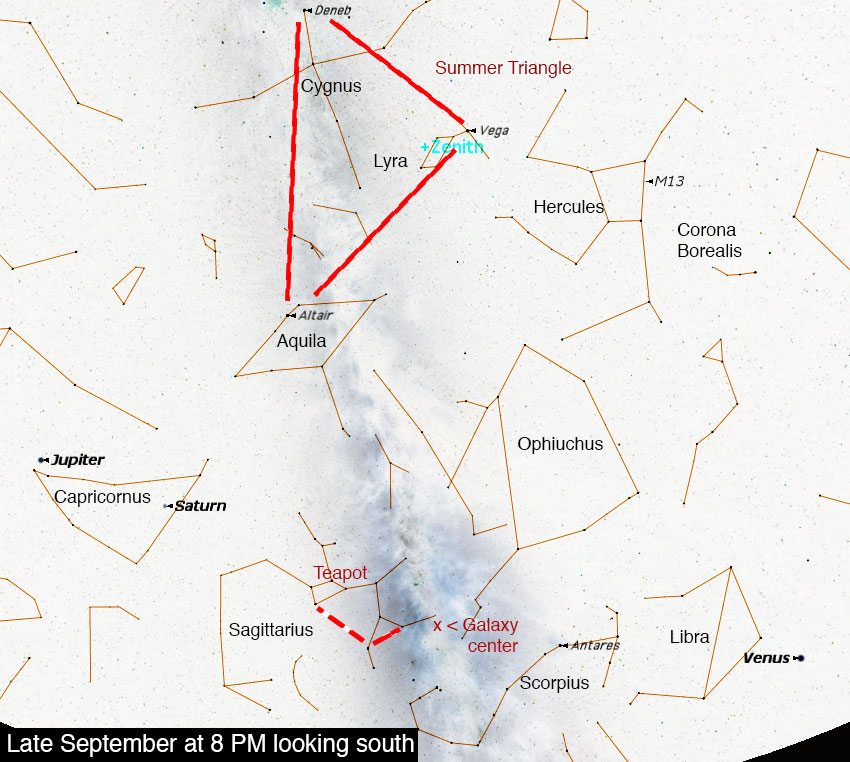