On the first Thursday of October, October 3, will be a showing of “Ice Worlds”. Ice Worlds explores how ice shapes the landscapes and the natural systems in various places in our solar system, including Mars, Titan, Enceladus, and, of course, Earth. The show concentrates on the role ice plays in keeping Earth habitable. Each planetarium show begins with a tour of the evening night sky using the Goto Chronos star projector and then the all-dome film follows. The doors open at 7 p.m. and are locked when the show begins at 7:30 p.m. Go to the Planetarium’s website at www.bakersfieldcollege.edu/planetarium to get the links for information about buying tickets at the BC Ticket Office or online through Vallitix.

September 23 is the autumnal equinox when our season of autumn or fall officially begins. This happens when the geometric center of the sun’s disk crosses the celestial equator heading southward. With such a precise definition of the equinox, we can pinpoint down to the minute when the equinox occurs and this year it will be 12:50 a.m. on September 23. On the equinox (a term coming from “equal night”), the night is approximately equal to the day and the amount of night is approximately equal all over the planet. I have to say “approximately” because the sun is not a pinpoint object on our sky but a sizable ball and Earth’s atmosphere causes some bending of the sun’s light. Also, the north-south part of the drift of the sun with respect to the stars is larger at the time of the equinoxes than other times of the year. For us in Bakersfield, the exact twelve-hour daylight will be a few days later, on September 26. You can check out the sunrise and sunset times for other times of the year and other locations using the NOAA Solar Calculator at www.esrl.noaa.gov/gmd/grad/solcalc/ .

One sad event in space exploration is India’s loss of communication with the lander part of its Chandrayaan 2 lunar mission. It was scheduled to land a lander and rover near the moon’s south pole on September 6. If it succeeded, it would have been the closest soft landing to one of the moon’s poles. The orbiter part of the mission is still functioning well and will continue with its study of the moon from an orbit 100 kilometers above the surface. The lunar poles are of particular interest because deposits of water ice have been found in the floors of craters that are in perpetual shadow. Those water ice deposits could be used for future human bases on the moon. For more about Chandrayaan 2, go to www.isro.gov.in/chandrayaan2-home-0 .

In our sky tonight, the moon will be at waning gibbous phase, two days past full phase, among the dim stars of Pisces (below the Great Square of Pegasus)---see the attached star chart below. It will rise at about 8:40 p.m. The two largest planets of the solar system, Saturn and Jupiter will be south-southwest by then among the brighter stars of Sagittarius and Scorpius. At the end of the month, we’ll be able to see a beautiful thin crescent moon in the southwestern evening sky shortly after sunset. Although, a full moon can look quite spectacular as it rises, I find a thin crescent moon hanging low in the sky even more beautiful. Maybe it’s because the thin crescent shape seems more delicate and unlike anything else in the sky.

On October 5 will be the final public star party hosted by the Kern Astronomical Society for the season. They will have their telescopes set up in the parking lot of Barnes & Noble. Even with the light pollution of the center of town, there will be good viewing of bright objects such as the first quarter moon, Jupiter, Saturn, and various star clusters. Observing will begin shortly after sunset and go until about 10 p.m., depending on the amount of foot traffic. Come take one last look! 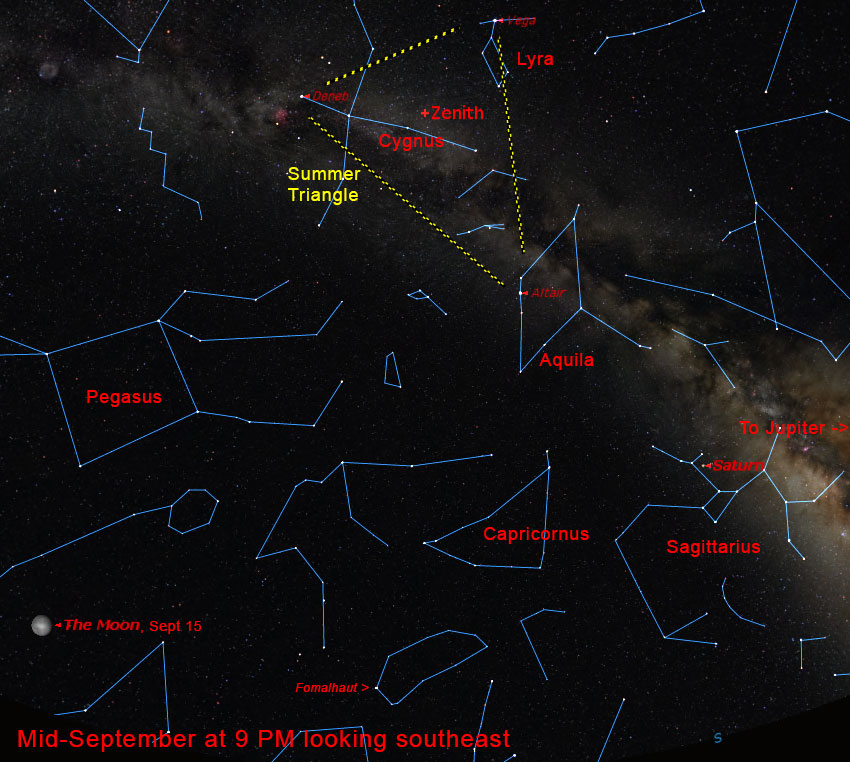