Tickets are now on sale for the premier showing of “Destination Mars: the New Frontier” at the William M Thomas Planetarium on October 16. In this fiftieth year anniversary of the first landing on the moon, “Destination Mars” presents the future of human exploration on Mars. If you would like to explore the work being done around the globe to help make the dream of getting humans to Mars a reality, come to the show! The planetarium show will begin with a tour of the evening night sky using the Goto Chronos star projector and then the all-dome film will follow. The doors open at 7 p.m. and are locked when the show begins at 7:30 p.m. Go to the Planetarium’s website at www.bakersfieldcollege.edu/planetarium to get the links for information about buying tickets at the BC Ticket Office or online through Vallitix.

A bit farther away than Mars is an exoplanet that is too big for its star. At least it’s too big if it formed in the usual way of dust grains sticking together to form pebbles, pebbles sticking together to form boulders, boulders sticking together, etc. on up to forming something the size of planet. The star GJ 3512 is a small red star in the catalog of nearby stars compiled by Wilhelm Gliese and Hartmut Jahreiss in 1991, so that’s what the “GJ” means in its name. GJ 3512 is 31 light years away in the constellation Ursa Major (just below the head of the bear) but it requires a telescope at least ten inches in diameter under dark skies to see because it is so small and dim at just one-eighth the mass of the sun and 1/1200 the light output of the sun.

Small stars form from small disks of gas and dust. A large gas-giant planet growing via the usual accretion process of dust to pebble to boulder to planetesimal would not have enough time to form in the small disk before the star started nuclear fusion and produced the strong stellar winds driving away all the rest of the gas in the disk. So how did GJ 3512 manage to get a giant planet, half the mass of Jupiter orbiting it every 214 days? There’s a hint of another big planet orbiting the star farther out every 3.8 years with about half the mass of Saturn.

A couple of decades ago, the astronomer Alan Boss, proposed another planet creation scenario. It involves turbulence in the gas/dust disk which creates instabilities that collapse under their gravity. Giant planets with modest cores of ice and rock could form within a 100 years or so instead of the millions of years required for the usual accretion process. That idea lay dormant until we discovered the exoplanet(s) of GJ 3512. It doesn’t mean we throw out the accretion theory for planet formation. Nature often uses a variety of methods to create something, so in the case of exoplanets, Boss’ theory is an additional way to make a planet. When we say, “either-or”, Nature says “both-and”. Hmm… maybe Nature is telling us something.

Our solar system’s two giant planets still rule our evening sky. Jupiter is getting dimmer as we move away from it in our faster orbit. It is still in the stars of Ophiuchus, above the middle of Scorpius. It will be visible until about 9:30 p.m. Saturn is still fairly bright among the stars of Sagittarius and it will set at around 11:20 p.m. The moon is a waxing gibbous just one day past first quarter phase to the left of Saturn (see the star chart below). It will be full next Sunday, October 13. The Summer Triangle made of the stars Deneb, Vega, and Altair is high overhead in the early evening.
The inner planets, Mercury and Venus are a little bit to the left of the sun, so you may be able spot them low in the west just after sunset. Mercury reaches its greatest angular separation from the sun (“elongation”) on October 19 but it will always be close to our horizon. Venus will continue climbing up away from the sun as fall progresses, so it and Jupiter will be our brilliant “evening stars”.

Mars is now becoming visible in the early pre-dawn morning sky in the east but better views will be possible later this month. Later in October you’ll be able to see some meteors from the Orionid meteor shower. That shower will peak on the night of October 21/22 and the moon will be at third quarter phase then, so it won’t wash out too many of the meteors.

One last item: there’s been a bit of a buzz in my science news feed about a recent paper that says the proposed “Planet Nine” in our solar system way beyond Pluto could be a very small black hole. My brief thoughts: this is far out speculation of what is already a speculated gravity source and a black hole with mass just a few times more than Earth is a million times smaller than the smallest black hole detected so far. Possible: yes. Probable: no. 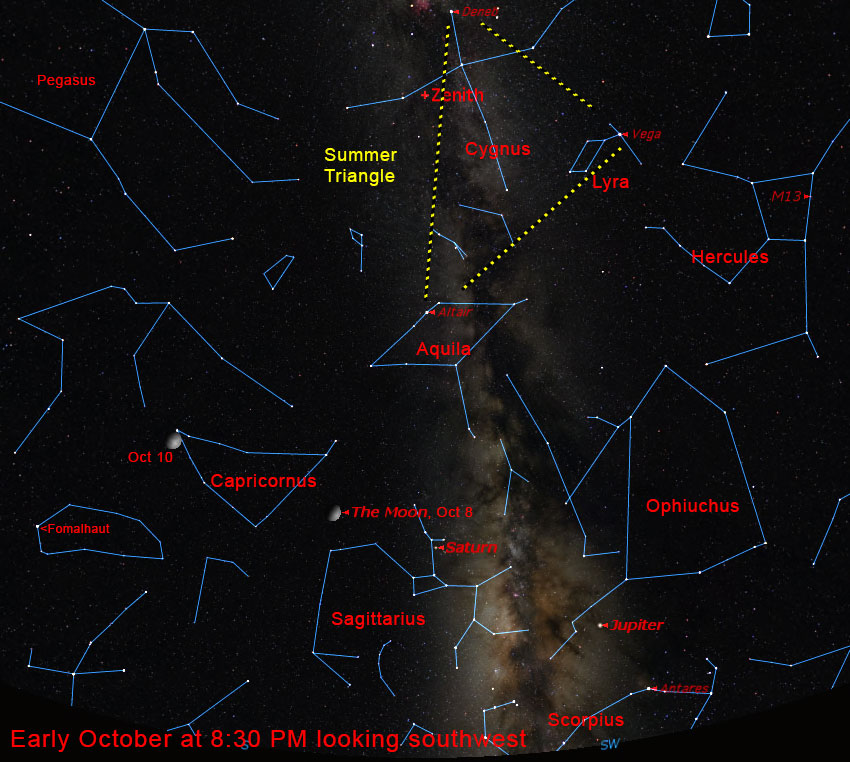