The evening sky now belongs to Mars. If you’ve seen a big bright orange star (or red star with all the smoke) in the east after about 8:30 p.m., you’ve seen Mars. Now, I know that I shouldn’t be surprised at how bright it is because of my extensive training in astronomy but I’m amazed at how bright it is! It’s even brighter than Jupiter! It is in the dim constellation of Pisces but I have a very hard time seeing any of the Pisces stars from my house in Bakersfield.

Earth has caught up to Mars in our faster, inner orbit. On October 6 at about 11:30 p.m. we’ll be closest to Mars at just 38.57 million miles. On October 13 Mars will be at opposition when it is directly opposite the sun on our sky but it’ll be about 413,000 miles farther away because of its elliptical orbit. Mars’ orbit has about six times the eccentricity of Earth’s orbit, though eye-balling it, you’d be hard-pressed to notice that Mars’ orbit wasn’t a circle. That slight eccentricity means, that not all Mars oppositions are the same. Some Mars oppositions have been closer such as the previous one in 2018 and the very close one in 2003 and others have been farther such as the ones in 2010, 2012, 2014, and 2016. The next time Mars will be as close as it is this month will be in 2035.

The 26-month synodic period of Mars and Earth means that the time of year for the close flybys shifts by about two months. That shifting of the dates means this year’s close flyby is better placed in our sky than the one in 2018. Mars is 30 degrees higher in the sky when it crosses the meridian than it was in 2018, so there is less of Earth’s atmosphere to look through that would tend to blur the view. All this is to say is that this is a good time to look at Mars through a telescope!

At NASA’s Mars site (mars.nasa.gov) you can find a 1.8-billion pixel panorama image of Gale Crater taken by the Curiosity rover that has been exploring Mars since 2012. The more than 1000 images used to create the panorama were captured in the last week of November 2019 and were carefully assembled over the following three months. It’s a fantastic image that you can pivot around and zoom in and out of using the tools on the site.

In this month’s issue of Sky and Telescope is a photo essay of beautiful images taken by the High Resolution Imaging Science Experiment (HiRISE) on the Mars Reconnaissance Orbiter. In shots 6 kilometers wide by up to 60 kilometers long, features as small as 1 meter across can be seen from an orbit that is 300 kilometers high. The general public can choose targets for HiRISE to image through the HiWish program. The photo essay uses images from the HiWish program and the regular research program. They are all spectacular images. Go explore more images at www.uahirise.org .

In our night sky above Mars is the Great Square of Pegasus (see the star chart below). To the left of Pegasus is Andromeda with the closest large galaxy to us, the Andromeda Galaxy (aka M 31), just above the middle stars of Andromeda. Jupiter and Saturn are the two bright points in the southern sky at sunset with Jupiter being the brighter of the two. Higher up in the sky is the Summer Triangle formed by the brightest stars of Cygnus (Deneb), Lyra (Vega), and Aquila (Altair). The moon is a waning gibbous that rises about an hour after Mars rises. On October 6, the moon will be 2.5 hours behind Mars, just above the bright star Aldebaran at the eye of Taurus the Bull.  By the time of opposition on October 13, the moon will be a thin waning crescent, rising shortly before sunrise. In the early pre-dawn sky you’ll be able to spot Venus rising in the east about three hours before sunrise. The star above Venus is Regulus at the chest of Leo the Lion. 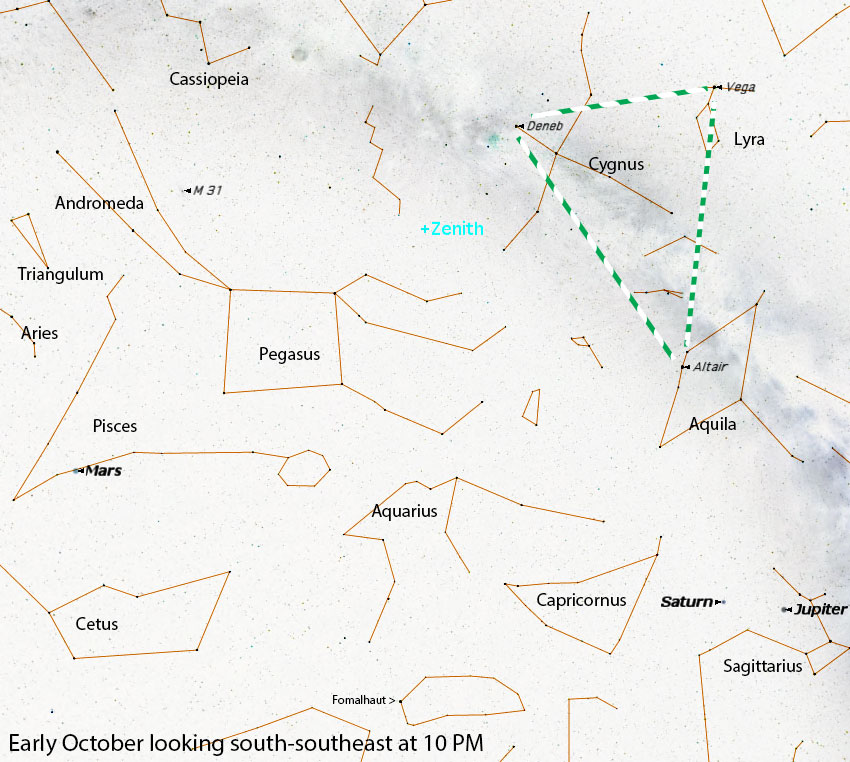