Tickets are now on sale for the two November shows at the William M Thomas Planetarium: “Dynamic Earth” showing on November 7 and the premier of “MARS One Thousand One” (or “MARS 1K1” for short) on November 20. MARS 1K1 is the story of one possible mission that carries an international crew to Mars. Space reporter Miles O'Brien guides you through the first human mission to Mars — a daring 1000-day mission to fly an international crew to the red planet and return them safely to Earth. The film continues the Planetarium’s celebration of the fiftieth year anniversary of the first landing on the moon. MARS 1K1 is a bit longer than the other full-dome films we show at the planetarium, so the entire presentation, with the tour of the evening night sky using the Goto Chronos star projector that we do with every presentation, will run from 7:30 to 9:00 p.m. The doors open at 7 p.m. and are locked when the show begins at 7:30 p.m. Go to the Planetarium’s website at www.bakersfieldcollege.edu/planetarium to get the links for information about buying tickets at the BC Ticket Office or online through Vallitix.

The Nobel Prize in Physics this year went to three astrophysicists. James Peebles has been working on Big Bang physics and cosmology since even before the discovery of the cosmic microwave background radiation in the mid-1960s.  Peebles is to cosmology what Stephen Hawking and Kip Thorne are to black holes. His 1993 tome “Principles of Physical Cosmology” is on my bookshelf from graduate school days. Peebles writes, “Physical cosmology is the attempt to make sense of the large-scale nature of the material world around us, by the methods of the natural sciences.” Elsewhere, he notes that physical cosmology includes, “the network or observational and theoretical elemental that establish [cosmology] as a mature physical science.” His other books are classics in the field. Through his long career, Peebles laid the foundation of our modern understanding of a universe that began 13.8 billion years ago in a burst of energy and rapid expansion called the Big Bang and is now dominated by dark matter and dark energy, with just 5% of the universe made of ordinary matter—the stuff we can directly observe with our telescopes.

The other half of the Nobel Prize in Physics went to the team that discovered the first exoplanet around a regular “Sun-like” star (51 Pegasi b) in October 1995: Michel Mayor and Didier Queloz. Although exoplanets had been found in 1992 and 1993 around pulsars using the pulsar timing technique, pulsars are dead stars and the planets could have been the result of the supernova that made the pulsars and in any case there was absolutely ZERO chance that life would be found on these charred, irradiated worlds. The star 51 Pegasi is a regular, ordinary star like our sun. With Mayor’s and Queloz’s discovery, we now knew for sure that stars could have planets around them AND we now had the technology to find them. The floodgates opened and we now know of almost 4100 confirmed exoplanets, almost 4500 candidates are still waiting for confirmation, and many thousands more are expected to be discovered in the next few years.

In other exoplanet research news was the official inauguration of the NenuFAR radio telescope array in France in early October that could reveal what is happening in the interiors of exoplanets. The NenuFAR array will look for signs of magnetic fields around exoplanets. Magnetic fields are produced by the churning, swirling motion of liquid metal in a planet’s core. A planet with a magnetic field is able to fend off the onslaught of charged particles flowing out from the star the planet orbits. Without a magnetic field, a planet’s atmosphere can be blasted away over time like what happened with Mars. The magnetic field also protects the planet from cosmic rays from interstellar space.

The NenuFAR array is part of the larger Low Frequency Array (LOFAR) that will eventually span much of western Europe. “NenuFAR” is short for “New Extension in Nancay Upgrading LOFAR”. It will also be used to find signals from the universe’s first stars. NenuFAR will be able to detect magnetic fields only around giant planets that are very close to their star. Detecting magnetic fields around Earth-size exoplanets will probably require radio telescope arrays built on the far side of the moon.

Tomorrow night is the peak of the Orionid meteor shower. The moon will be a waning crescent, one day past third quarter phase, so it won’t wash out too many of the meteors. If you trace the meteor paths back, you’ll see that they appear to come from a location between Orion and Gemini, above the bright red supergiant star, Betelgeuse at Orion’s right shoulder. The Orionid meteor shower is not a strong shower with just 20 meteors seen per hour under the best of observing conditions. The meteor shower will continue until the first week of November. If you stay up late enough, you will be able to see Mars rising about 1.5 hours before sunrise. 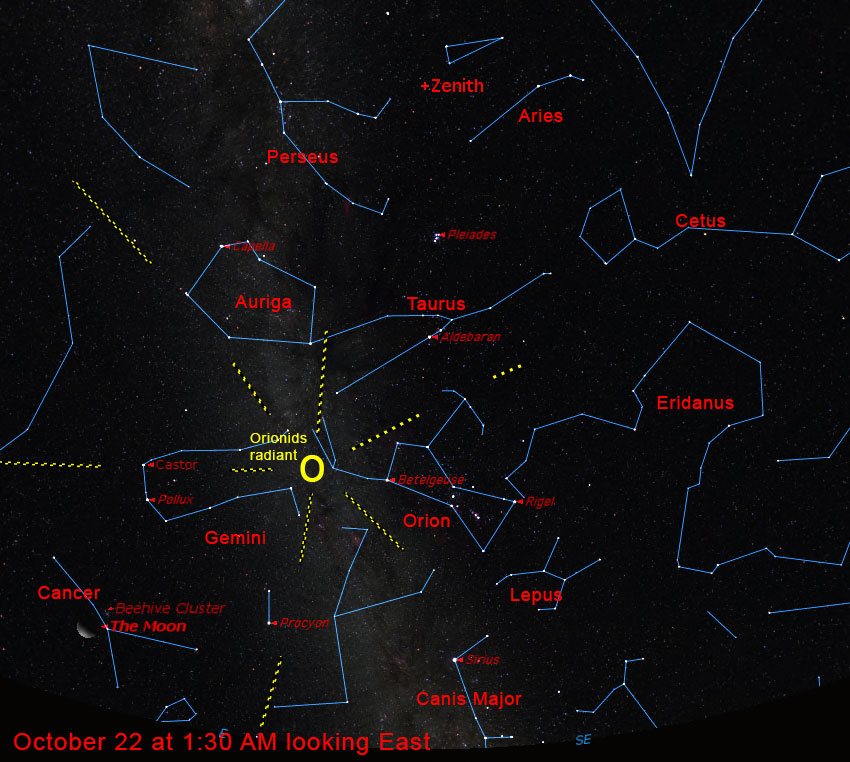