Black holes were the subject of this year’s Nobel Prize in Physics. Three astrophysicists shared the prize: Roger Penrose got half of the prize for his “discovery that black hole formation is a robust prediction of the General Theory of Relativity” and Reinhard Genzel and Andrea Ghez shared the other half of the prize for their “discovery of a supermassive compact object at the center of our galaxy.” Genzel and Ghez worked in two separate teams on two different continents to probe the center of the Milky Way. Local audiences will probably be more familiar with Andrea Ghez since her work is a centerpiece of the popular “Black Holes: The Other Side of Infinity” show that plays frequently at the William M Thomas Planetarium at Bakersfield College.

Ghez and Genzel use the largest telescopes in the world to hone in on the stars orbiting the supermassive black hole at our galaxy’s center. Ghez uses the 10-meter diameter Keck Telescope in Hawaii and Genzel uses the Very Large Telescope facility in Chile which has four 8-meter diameter telescopes. They each had to develop techniques to peer through the gas and dust that blocks our view of the center as well as overcome the blurring effect of our turbulent atmosphere. They have been watching the stars that orbit very near the supermassive black hole since the early 1990s.

By tracking the positions of these stars very precisely, they were able to independently show that these stars must orbit a very compact object with a mass of about 4 million times the mass of the sun. It is the fact that the two groups were independent and competing against each other that put the discovery of the supermassive black hole at the galaxy’s center on a firm foundation. One star is so close that it takes less than 16 years to orbit the supermassive black hole in a very elliptical orbit. At closest approach the star is whipping by at 7000 km/sec!

At our great distance of almost 27,000 light years from the galactic center, the sun takes about 212 million years to orbit the galaxy and the gravity the sun feels inside of its orbit is due to stars, gas, dust, and dark matter. In fact, if the supermassive black hole was not present at all, the sun’s orbit would be essentially the same as it is now. While 4 million solar masses is a lot, the almost 100 BILLION solar masses of other material inside the sun’s orbit is a lot bigger!

Last month I wrote about the surprising discovery of large quantities of phosphine being found in Venus’ atmosphere. The quantity of phosphine in the atmosphere could be explained through biological processes in the clouds, so the discovery made national news. While more observations will be made by other research groups to verify the phosphine signal and while other groups will be trying to figure out geological processes to create the phosphine, another group is looking at archival data in Venus probes of decades ago to see if they may have overlooked something.

They’re looking at data from the NASA Pioneer Venus 2 mission which consisted of an orbiter and four atmospheric probes. The atmospheric probes entered Venus’ atmosphere in December 1978. The largest of the probes had a mass spectrometer and a gas chromatograph to “sniff the air” (measure the atmospheric composition). Well, looking at the data from a fresh perspective has revealed evidence of phosphine along with methane and ammonia that could also be made by microbes, although the new analysis does not indicate the quantities of the phosphine nor whether or not it is biological in origin. Large quantities of these molecules would not survive long in Venus’ atmosphere because the chemistry of the atmosphere quickly breaks it down and transforms it to something else. There must be some source continually pumping in the phosphine, methane and ammonia.

How could they have overlooked those detections? Rakesh Mogul (from Cal Poly Pomona), who led the team doing this new analysis of the Pioneer Venus 2 data, wonders if people were focused on just the gases that would survive in chemical equilibrium with Venus’ atmosphere because it was assumed that the hellish conditions of Venus would make it impossible for any type of life to upset the equilibrium. He speculates that “perhaps [the researchers in 1978] were just waiting for other data to support the evidence of disequilibria in the minor species [such as phosphine]. And maybe this is the time for it.”

Well, I’m shocked, shocked to find that people could overlook something so obvious because of their pre-conceived notions of how things should be!

The Orionid meteor shower peaks on the night of October 20/21 and the moon will be at waxing crescent, so it will set early in the night. That will keep the sky dark enough to spot some extra meteors. On Halloween, we’ll have a blue moon—second full moon in the same month.

Stay healthy, wear a mask and keep six feet between you and others in crowds to prevent passing COVID19 on to others. Only you can prevent infections. 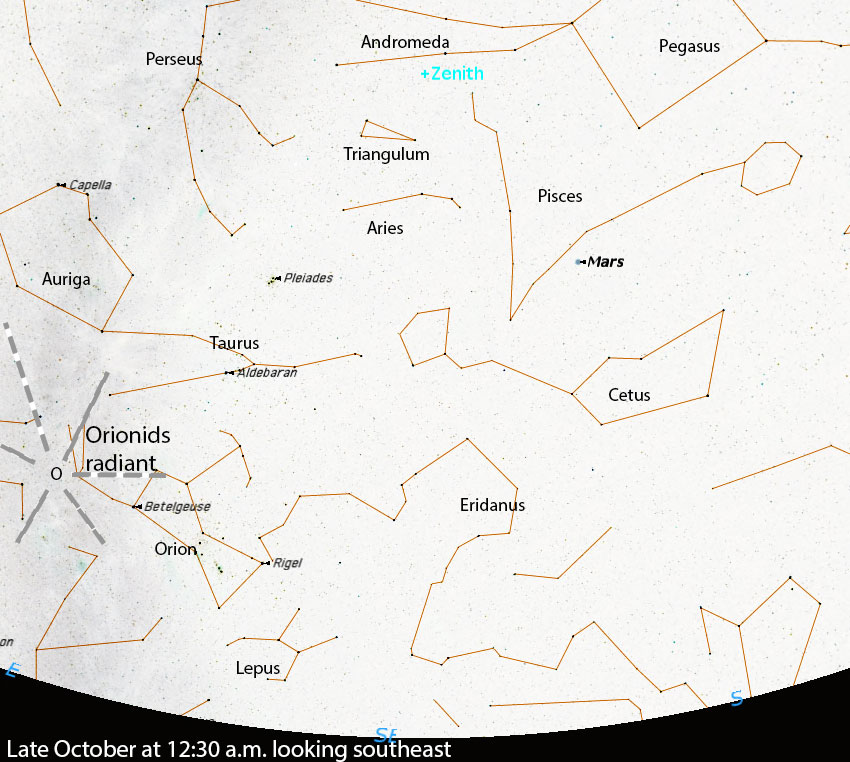