There may be more water on the moon than we originally thought. While it’s not enough to think about beach front vacations, it may be enough to sustain a permanent human presence on the moon. One study released last week shows that about 40,000 square kilometers in the polar regions of the moon are in permanent shadow, so they could harbor water ice brought to the moon by meteorite and comet impacts. These cold traps are distributed among tens of billions of small depressions a centimeter to a meter across in regions near the lunar poles.

Another study also released last week detected the presence of water in sunlit parts of the moon. Previous studies had found the infrared fingerprints of hydrogen in sunlit parts of the moon but those detections could also be explained by other hydrogen-oxygen molecules besides water. The latest study observed in a different wavelength band of the infrared that would be specific to water. However, the wavelength band in question (6 microns) is blocked by the water vapor in our atmosphere and there’s no spacecraft capable of observing at that wavelength.

The only infrared detector capable of observing at 6 microns and able to get high enough above the water vapor in our atmosphere is the one on the flying observatory called SOFIA (“Stratospheric Observatory for Infrared Astronomy”). SOFIA is a modified Boeing 747SP that carries a 2.5-meter diameter reflecting telescope into the stratosphere. It operates out of NASA’s Armstrong Flight Research Center Building 703, in Palmdale. This was the first time SOFIA observed the moon and it was for only 20 minutes in an otherwise packed observing run of many other objects.

The water that survives the harsh solar radiation is probably found as water molecules trapped in impact glass beads as micrometeorites hit the surface or in voids between grains of lunar soil. The amount of water found in the Southern Highlands near Clavius Crater at about 60 deg south latitude is only about 100 to 400 micrograms per gram of soil or about 12 ounces per cubic meter of lunar soil. That’s about 100 times less than what the soil in the Sahara desert has but before you laugh off the tiny amount, consider that to send just 12 ounces of water to the moon will cost us over $14,000 (and that’s even with an Amazon Prime membership). Extracting water from the super-dry lunar soil will save many millions of dollars for a crew of a few people. Humans will use the water for their bodies and for an energy source.

In other space exploration news, the OSIRIS-REx spacecraft exploring the near-Earth asteroid Bennu, successfully grabbed a sample of Bennu and stored it in the capsule for a return to Earth. Since everything about the mission since arriving at Bennu had turned out to be much harder than expected, the OSIRIS-REx team was relieved that their first collection attempt grabbed so much that the storage container was stuffed. Rather than determining the mass of the sample through a spin maneuver, the team moved to store the container as fast as possible because some material was actually leaking out.

There were two other attempts built into OSIRIS-REx’s schedule before it would have to leave Bennu in mid-March 2021 but they won’t be needed. The spacecraft will take a long fuel-efficient route to get back to Earth, arriving home in late September 2023. Using the same path as the successful Stardust mission in late 2005, the capsule from OSIRIS-REx will land in the Utah Test and Training Range.

Another near-Earth asteroid is getting renewed attention. A new calculation says that Asteroid 99942 Apophis has a chance of hitting Earth in April 2068. Now the chance is just 1 in 150,000 but the 235-meter rock could cause significant damage if it were to hit us. A team of astronomers re-examined the way a tiny effect called the Yarkovsky effect could accumulate over time to change Apophis’ path to an Earth-rendezvous one. The Yarkovsky effect is caused by sunlight heating the surface and then the body re-radiates the energy as infrared light preferentially in the afternoon of the spinning body (see my online astronomy textbook Astronomy Notes for more details of that). We’ll have a much better idea of the chances of a future hit when Apophis passes near Earth in April 2029 and we’ll be able to make very precise measurements of Earth’s gravity effect on Apophis’s orbit.

We’ll be able to experience a much gentler impact show next week when the Leonid meteor shower peaks on the night of November 16/17. Little bits of Comet 55P/Tempel-Tuttle will streak across our sky in the nights surrounding the peak as Earth runs into the dust trail left behind by the comet. The dust particles hit the atmosphere at 44 miles/second. The peak will happen one day past new moon, so it should be a dark night for observing meteors. The moon will be at first quarter on the following Saturday, November 21.

Jupiter returns to its status as the brightest of the evening planets but Mars is still putting on a good display as the bright orange-red star that can’t be missed in the southeast in the evening. 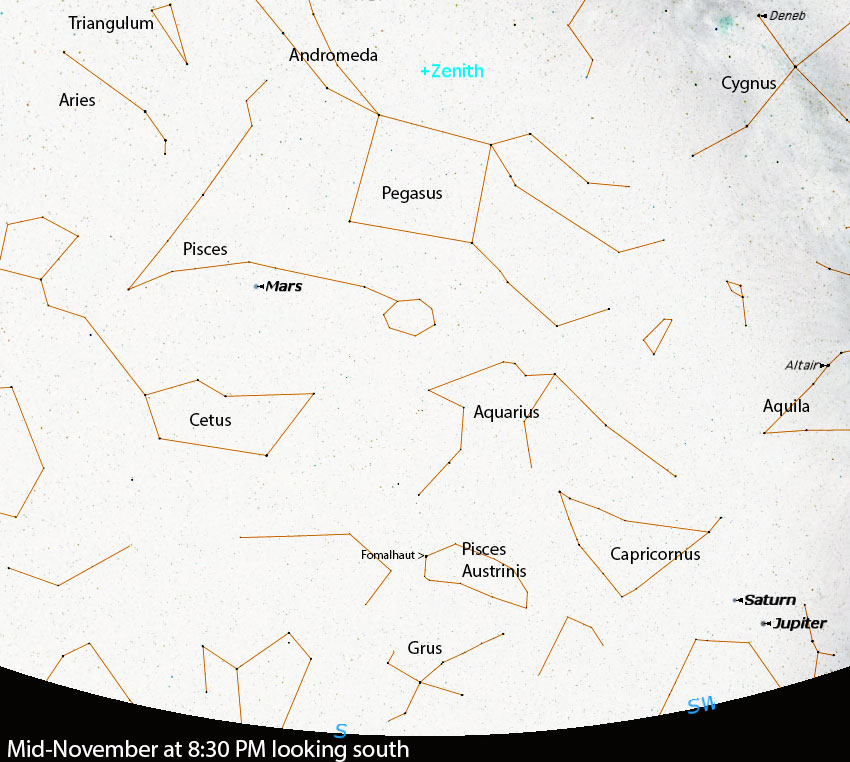