This Thursday, November 7 is the showing of “Dynamic Earth” at the William M Thomas Planetarium. Dynamic Earth, narrated by Liam Neeson, explores the inner workings of Earth's climate system. With visualizations based on satellite monitoring data and advanced supercomputer simulations, this cutting-edge production follows a trail of energy that flows from the Sun into the interlocking systems that shape our climate: the atmosphere, oceans, and the biosphere. Two Wednesdays later on November 20 will be the premier of “MARS One Thousand One”, the story of one possible mission to Mars. The doors open at 7 p.m. and are locked when the show begins at 7:30 p.m. Go to the Planetarium’s website at www.bakersfieldcollege.edu/planetarium to get the links for information about buying tickets at the BC Ticket Office or online through Vallitix.

On the morning of Monday, November 11, we will be able to witness one of the rare transits of Mercury across the face of the sun. Although the closest planet to the sun passes in between Earth and the sun every 116 days, the slight tilt of its orbit with respect to our orbit around the sun means it usually passes above or below the sun as seen from our vantage point. The previous transit of Mercury occurred in May 2016. The next transit of Mercury will be in November 2032 but next transit visible from the U.S. won’t be until May 2049.

The transit of Mercury will already be in progress by the time the sun rises for us on November 11 but we’ll be able to see the majority of its almost 5.5-hour passage across the face of the sun (see inset of star chart below). The midpoint will be at 7:19 a.m. and the transit will end at 10:04 a.m. On the William M Thomas Planetarium homepage is a link about how to view the sun safely. Also, on the homepage is an image of the sun during Mercury’s previous 2016 transit. It will be a tiny dot, so you will need a telescope fitted with a solar filter at the front of the telescope or a projected image of the sun that makes the sun image large enough to see the black dot of Mercury on it. The link about viewing the sun safely on the Planetarium’s homepage also includes information about what items to NOT use because they do not adequately protect your eyes.

It’s possible to use the slight shift of Mercury’s position on the sun due to different observing positions on Earth to determine the distance of Earth to the sun. The distance from Earth to the sun is such a fundamental measurement to setting the scale of the solar system and interstellar distances that it is called the “astronomical unit” or “AU” for short. With Copernicus’ work in the first half of the sixteenth century, we knew the proportional scaling of the solar system—Mercury is about 0.39 AU, Mars is about 1.5 AU, and Jupiter is about 5 AU from the sun but we did not know how many miles were in 1 AU.

People at widely separated positions will see Mercury’s silhouette at slightly different apparent positions due to parallax, similar to the shift you see in your thumb when you look at it with one eye and then the other eye, though Mercury’s parallax shift will be much smaller than your thumb’s shift! Using the angular shift of Mercury in conjunction with the distance between the two observing points, it is possible to determine the AU with trigonometry. The Citizen TOM (Transit of Mercury) Project, led by Zack Stockbridge, is taking data across the U.S. using a network of telescopes created for the 2017 total solar eclipse. Students will use the data to calculate the AU. See https://youtu.be/QRC2pgbkpbU for how to participate in Citizen TOM.

The distances to the stars are also determined using the parallax effect when we observe the stars from different parts of our orbit around the sun and knowledge of the distance between Earth and the sun. The parallax distances to the stars form the basis for determining the distances to other galaxies, so determining the numerical value of the AU sets the scale for the entire universe. The term “astronomical unit” doesn’t quite convey its importance but “FUndamental MEasurement Setting the SCale of the Entire Universe” (FUMESSCEU, “fume-skew”) is too much of a mouthful.

The two brightest planets, Venus and Jupiter, will be visible in the evening twilight tonight low in the southwest. Jupiter will be the higher of the two objects about two fists at arm’s length distance from Venus. Over this month Venus will climb up higher from the sun to close the gap between the two planets. They will be right next to each other on the nights of November 23 and 24. Further east of Jupiter is Saturn that shines as a bright point to the left the Teapot part of Sagittarius. The moon is at first quarter phase tonight and it will be at full phase on the night of the transit of Mercury (November 11). 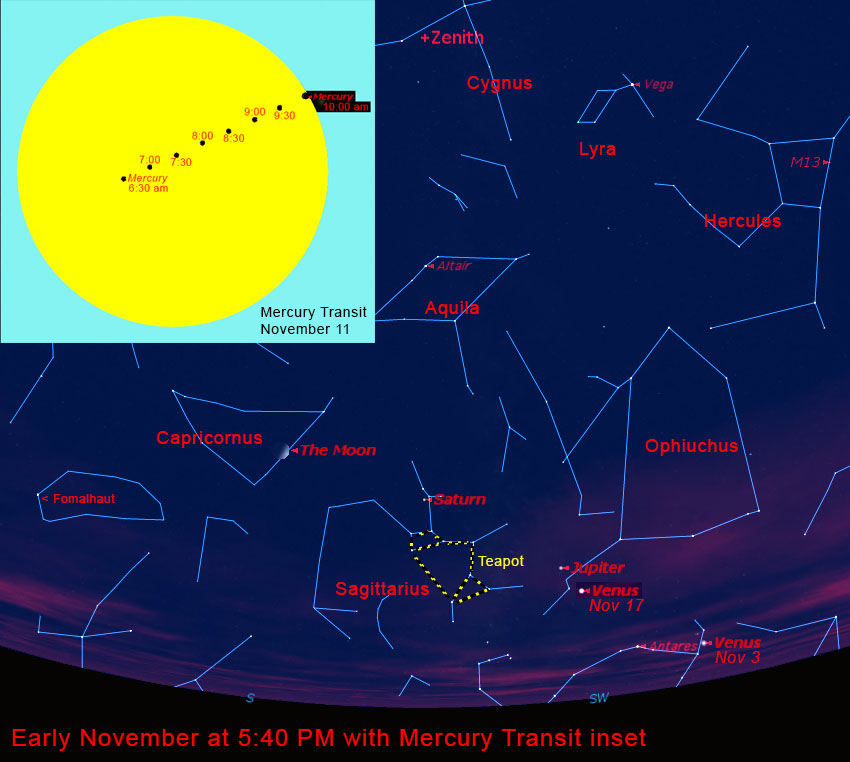