The search for another Earth sounds like the popular science fiction TV series, “Battlestar Galactica” but finding a planet like Earth might not be as hard as it was in the series. A couple of weeks ago a large team of astronomers released the most complete analysis of the huge trove of data from NASA’s famous Kepler planet hunter mission which says that the number of Earth-like planets in our galaxy is at least 300 million. In this context, “Earth-like” means a small, rocky world between 0.5 and 1.5 times the diameter of the Earth (so, between 0.125 and 3.38 times the mass of Earth if it’s a rock-iron world of the same density) orbiting within the habitable zone of a star that is like the sun. The habitable zone is the range of distances from the star where the surface temperature of the planet could be what is needed for water to be in the liquid form. If the statistics are correct, then the nearest rocky habitable zone exoplanet around a sunlike star is probably just 18 to 20 light years away. This 300 million figure is a small subset of the total number of habitable worlds possible in our galaxy.

The “sunlike” stars considered in this analysis are ones slightly cooler to slightly warmer than the sun that make up between 20% and 30% of the stars in our galaxy and ignores all those exoplanets we’ve found orbiting in the habitable zones of the very common cooler stars called red dwarf type M stars making up about 70% of the stars in our galaxy. Furthermore, there are plenty of exoplanets with diameters larger than the 1.5 Earth diameter upper bound used in this analysis. The total number of exoplanets in just our galaxy alone is probably over one trillion—plenty of planets for the crew of the Enterprise to boldly go explore (that’s for the Star Trek fans).

Another astronomy news item is about the once-habitable world, Mars. Mars is within the habitable zone of the sun and we know that there was once a substantial amount of liquid water on its surface that flowed in rivers and pooled in lakes and maybe even an ocean in the northern hemisphere. In order to have liquid water on the surface of a planet, there needs to a thick (dense) enough atmosphere to provide the necessary air pressure, so it doesn’t boil away at la ow temperature, and also the surface temperature needs to be warm enough. Mars had that long ago but in a case of catastrophic global climate change, it lost its warm, thick atmosphere, so liquid water can no longer exist on the surface.

Where did the water go? Some of its global supply is frozen below the surface in a permafrost layer and in the polar ice caps but some of the water escaped to space. We used to think that the escape-to-space mechanism couldn’t be that great because the water vapor shouldn’t be able to get high enough for solar UV to break apart the water molecules. On Earth, we have a “cold trap” in which the UV-blocking ozone layer is above the freezing point of water. As water vapor rises up it cools, condenses and freezes to drop back down on the surface as rain, snow, or hail. All of that happens below the protective ozone layer.

Mars doesn’t have an ozone layer but even still, we thought the water vapor wouldn’t get high enough to get zapped. It turns out that the global dust storms that Mars is famous for can pump water vapor up to heights high enough to get broken apart by solar UV. Graduate student Shane Stone led a team using the MAVEN orbiter to discover that the dust storms can increase the amount of water lofted to great heights by over twenty times. It also turns out that in addition to solar UV, carbon dioxide that has been ionized by solar wind (charged particles from the sun) can break apart water as well. Mars just couldn’t catch a break!

The dust storm loss of water process is an example of a tipping point that led to a feedback loop. When Mars was warmer, the liquid water would have kept the ground too moist for large dust storms. As Mars lost its magnetic field, its atmosphere was blasted away by the solar wind and Mars cooled off. That led to less greenhouse heating and more reflective ice which further cooled off the planet. The drying of the soil made it easier for dust storms to occur which dried the soil even further. Once tipping points are reached, positive feedback loops can drive a planet to a catastrophic end, even if it is still within the habitable zone of the star. Venus is an example of planet that went the other way, to an extreme hot end because of a runaway greenhouse process.

In our sky you can still see Mars shining brightly in the southeast at sunset and reaching its highest point due south at 8:45 p.m. The moon was at first quarter this morning and will pass by Mars as a waxing gibbous on November 25 on its way to full phase on the night of November 29. Venus becomes visible in the east by about 4:45 a.m. on the left edge of Virgo. 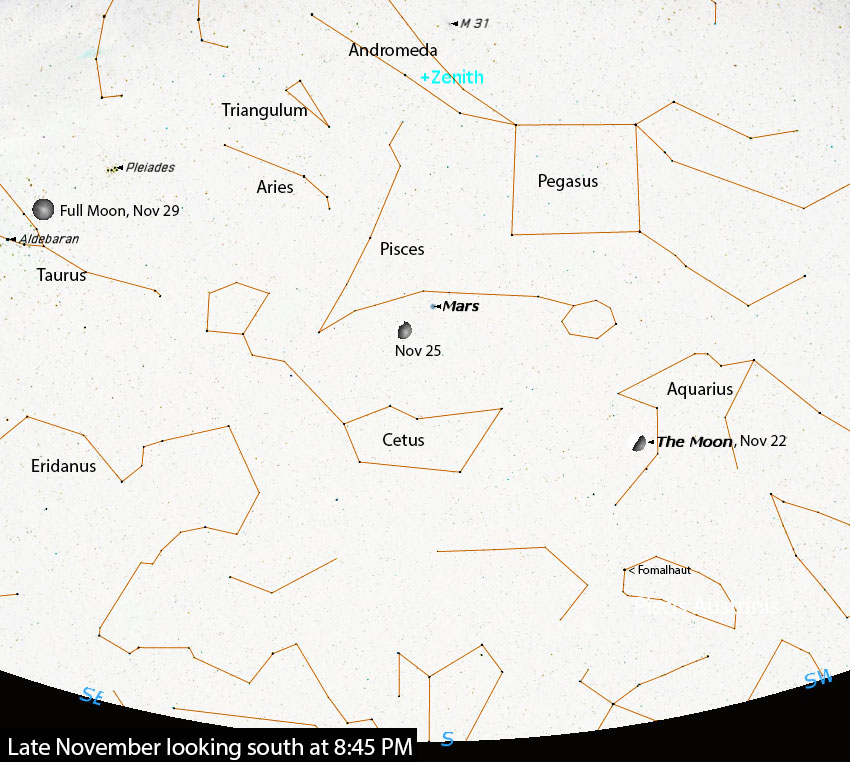