This column is going to be more philosophical than usual but it is about the science process which I have talked about a lot in past columns. A student asked me why the Flat Earth idea was now getting so much traction. Rather than giving a long dissertation, I told him that 1) it’s so easy to get locked into a position and screen out contrary views with today’s social media [see a Community Voices piece I wrote about that]; and 2) for the Flat Earth people, “seeing is believing” and they have to see it for themselves. They don’t trust science experts.

Here’s a bit more on point #2. Rather than trying to debunk all the claims made by Flat Earth believers, let’s try using their reasoning in something else. I could say that New Zealand and India don’t exist because I haven’t seen them myself. Other people say those places exist and have shown me pictures. Okay, well, maybe I can agree that those places exist because the people I’ve talked to include some good friends, colleagues at work, and my parents. But Antarctica doesn’t exist because no one I trust has been there.

That’s what it ultimately comes down to: who do you trust to bring you information about things you haven’t seen yourself? The Flat Earth leaders say we shouldn’t trust anyone and not to believe science experts in our research & education institutions because they’re all in on the conspiracy of a spherical Earth. I scratch my head and wonder then, why should I trust the Flat Earth leader?

The computer I'm using to write this up uses results from quantum mechanics theory to work. I've never seen an electron. No one has seen an electron. Yes, electricity exists---I've received a shock or two in my life but how do we know that that spark is made by electrons and the exchange of photons between them? That same quantum mechanics theory also talks about electrons tunneling through solid matter. Nuclear fusion in the sun and stars works via quantum tunneling and so does alpha decay.

When I look at the planets and the sun through a telescope, I see that they are spherical because gravity crushes things into the most compact shape possible in 3D space: a sphere. A flat Earth with as much mass as we see it has would also compress itself into a sphere. Gravity simply would NOT allow a flat Earth to exist. The night-day boundary on the moon is a curve just as it would be if the moon is a sphere. Small asteroids aren’t round because they don’t have enough gravity to overcome the material strength of the rock they’re made of. Earth is big, asteroids are not and besides, there aren’t any flat asteroids out there anyway. I realize that what I’ve written here won’t convince a true flat Earth believer because I’m just part of the vast conspiracy. I do hope, though, that most readers will see that science is a human endeavor relying on the experiences of many, many people to build up the picture of how the universe works. No one person can figure it out all by him/herself. Even Einstein relied on the advice of his doctor for medical issues, for example. Because of limited space, I’ll end this take on the philosophy of flat Earth and the scientific process for now. BC has some great philosophy faculty who’ll be happy to probe more of this with you if you want.

On spherical Mars, the Mars InSight lander team has made its first confirmation of a mars quake. The seismic tremor was a too weak to probe Mars’ interior. Hopefully, stronger ones will happen. Three other possible tremors were seen in the first couple of months but the jiggling of the seismometer could have been due to winds or thermal flexing of the equipment. The small number of tremors so far tells us that Mars is less active than hoped. See https://mars.nasa.gov/insight for updates.

On the larger scale, a team led by Adam Riess using the Hubble Space Telescope has shown that the universe is definitely expanding faster now than expected from observations of the afterglow of the Big Bang. The new result seems to show a third stage in dark energy’s push on the universe. More details at https://www.nasa.gov/feature/goddard/2019/mystery-of-the-universe-s-expansion-rate-widens-with-new-hubble-data .

May 11 is the free public star party at Barnes & Noble with the Kern Astronomical Society. See www.kernastro.org for details. 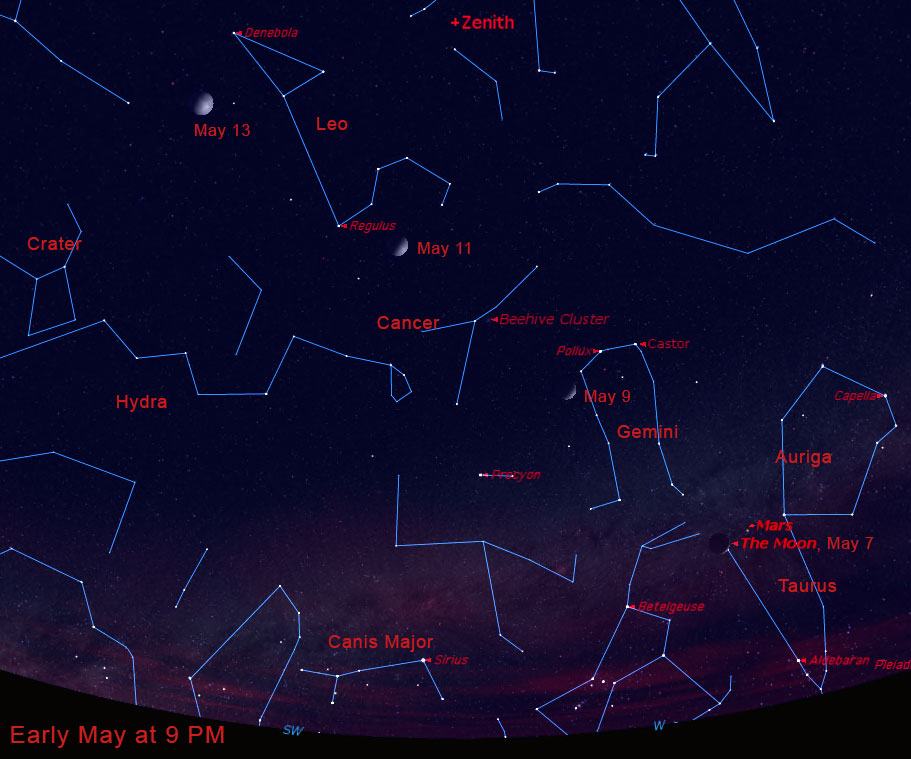