This is the last week of regular instruction at Bakersfield College and next week will be final exams. Most students continue to be engaged with their classes. Learning continues!

Last week I received a “Day in Review” message from the Jet Propulsion Laboratory about a new high-pressure ventilator they developed that is tailored to treat COVID-19 patients. It passed a critical test at the Icahn School of Medicine at Mt Sinai in NY and it’s now waiting FDA approval. The Jet Propulsion Laboratory is a NASA facility just south of us in Pasadena that is responsible for most of the planetary spacecraft you’ve heard about, such as Voyager, all of the Mars Rovers, Cassini, etc. In addition to the usual sort of technology “spin-offs” from NASA, probably even more important is the invaluable benefit of training engineers of how to solve problems, regardless of the application. The JPL Director Michael Watkins said, “We specialize in spacecraft, not medical-device manufacturing. But excellent engineering, rigorous testing and rapid prototyping are some of our specialties. When people at JPL realized they might have what it takes to support the medical community and the broader community, they felt it was their duty to share their ingenuity, expertise and drive.” Go to https://www.jpl.nasa.gov/news/news.php?feature=7646 to learn more about this work.

Last week NASA released a gorgeous image of the giant red nebula (NGC 2014) and its smaller blue neighbor (NGC 2020) to celebrate the thirtieth anniversary of the Hubble Space Telescope. Hubble was launched on April 24, 1990. NGC 2014 is part of a vast star-forming region in the Large Magellanic Cloud, a satellite galaxy of the Milky Way, about 163,000 light years away. The  image is nicknamed “Cosmic Reef” because it looks like a coral bed. Included in the release is a fly-through visualization of the 3D structure of both nebulae. The standard 2D image is already very beautiful but I was stunned by the fly-through visualization, especially when they rotated the view to reveal the bi-polar nature of the NGC 2020 nebula, which is material ejected by a super-hot star at its center. Our view from Earth is looking down one of the poles of the stellar outflow, so it looks like a fuzzy ring. The visualization uses more observations than the release image to put all the distances of the various features into a 3D model and then has the computer camera fly through the model. Just amazing!

It looks like the exoplanet we thought was orbiting the bright star Fomalhaut may be something else. Fomalhaut is the bright star in Piscis Austrinis that will rise in the east shortly before sunrise at this time of year. When it rises, it will be directly below Mars. Fomalhaut is a young hot, nearby star 25 light years away and is “just” 440 million years old (remember, we’re talking astronomy here). Almost twelve years ago, astronomers using the Hubble Space Telescope released images of the first exoplanet seen in visible light. The light from the bright star had been blocked by a device called a coronagraph to reveal the dust ring around the star that had been first observed three years prior but this time the images revealed a bright spot that was orbiting just inside the sharp inner edge of the dust ring. Comparison with an image taken two years prior showed the bright spot was orbiting the Fomalhaut—it looked like a planet and it was called “Fomalhaut b” because, well, why not?

Further observations over the following four years showed Fomalhaut b was in a significantly elliptical orbit that was going to carry it into the dust ring. At the time it was thought that one or more other planets were tugging on Fomalhaut b to make its orbit be so eccentric. What was puzzling was why the exoplanet was so dim in the longer wavelengths of infrared. It should have been brighter. Continuing observations of Fomalhaut b show that the exoplanet has faded away, so now astronomers are considering the possibility that the bright spot they first observed in 2004 is the result of a major collision between two large asteroids and the debris cloud has been expanding since then. Such collisions would be extremely rare (as in once every 200,000 years) and we would be extremely lucky to see it so soon after the collision. Calculations of the changing brightness of debris seem to show our first observation in 2004 was within just a couple of months of the collision. Astronomers will be wanting to look at the system with the James Webb Space Telescope soon after it launches in 2021.

Speaking of debris fields, the next meteor shower will be the Eta Aquarids that peaks on the night of May 5/6 as Earth runs into the dust trail left behind by Comet Halley. There’s about a fifteen-day range on either side of the peak that you can see the Eta Aquarid meteors but at the peak we can up to 10-30 meteors per hour in the northern hemisphere while those in the southern hemisphere are better placed to see between 30 to 50 meteors per hour. However, this year the waxing gibbous moon, just two days from full phase, will wash out at least half of the meteors. 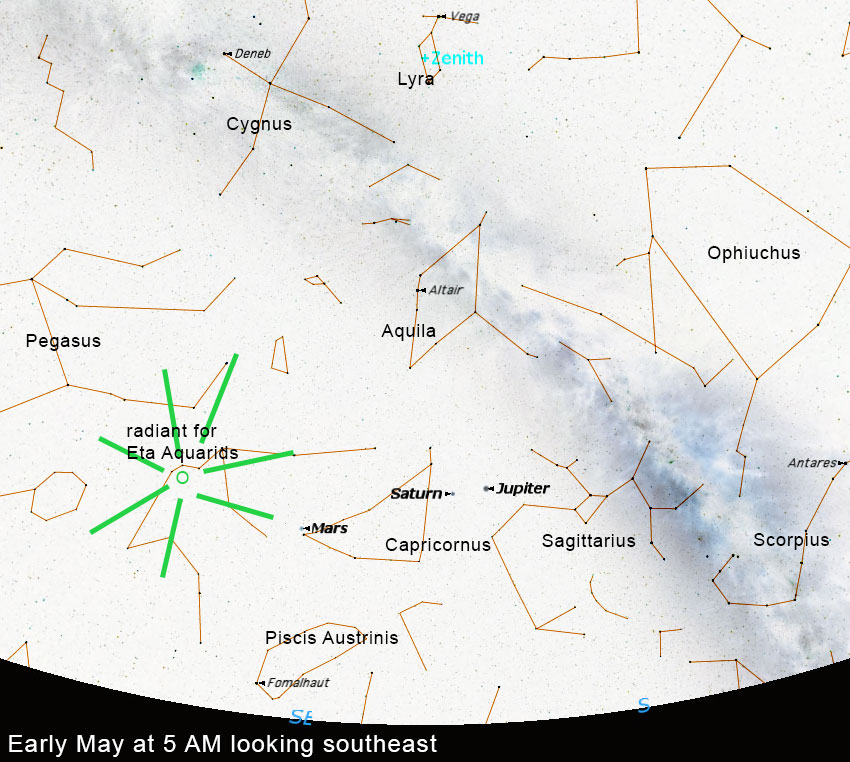