By today or tomorrow, the Ingenuity Mars Helicopter should have completed all of its test flights and the Perseverance rover will be moving on. As I write this [on April 26], the Ingenuity team was still deciding which way to send the craft on its final and longest most complex flight. The plan was to have the final flight push the craft to its breaking point, so we would know what are the engineering boundaries of flying on Mars.

In a different part of the solar system, it looks like a large metal asteroid called Psyche might not be as metallic as we thought. Psyche is a large asteroid about the length of Massachusetts along its long axis. It orbits the sun in the outer part of the asteroid belt. It is the subject of the mission also called Psyche that will launch next year and arrive at the asteroid in 2026. All asteroids we’ve visited with spacecraft so far have compositions like the majority of asteroids: mostly rock and volatiles such as water and carbon dioxide and maybe little bits of metal. Psyche, on the other hand, is almost pure metal iron-nickel and is thought to be the metal core remnant of a protoplanet whose crust and mantle were blasted away by a lot of impacts long ago.

The metal cores of planets are deep inside, hidden from any direct measurements of their compositions by hundreds to thousands of miles of rocky mantle and crust. Psyche gives us a direct view of a core. Or so we thought. A recent study published last week is casting that into doubt. Two astronomers, Lauri Siltala and Mikrael Granvik, looking at the gravitational deflection of ten smaller asteroids that passed close to Psyche, were able to measure Psyche’s mass. Combining the mass and size of Psyche enabled them to calculate the density of just 3.88 times the density of water. That rules out Psyche being a solid chunk of iron and nickel. Perhaps all the iron we infer on its surface from reflected sunlight spectroscopy is actually from volcanic eruptions of liquid iron sulfide. Spectroscopy is the analysis of a spectrum formed by taking the light from an object and passing it through a device such as a prism or diffraction grating to make a rainbow of colors. Some colors will be brighter than others depending on the composition of the object producing or reflecting the light.

Besides being interested in Psyche for what it could tell us about the structure and formation of planet cores, metal-rich asteroids could be mined for precious metals worth many quadrillions of dollars. Psyche itself is probably too distant to try to mine it for precious metals but there are some metal-rich small asteroids that have orbits closer to Earth and there are some billionaire entrepreneurs eyeing them hungrily for metal extraction. A few decades from now, we might even be able to use asteroids as spaceships by hollowing them out, so people living far below the surface would be shielded from the harsh solar wind and cosmic rays. Carbonates and volatiles could be extracted and used for rocket propulsion to shuttle the asteroid-spaceship colony from one location to another in the solar system.

Now is a good time to look for Mercury in the evening sky just after sunset. Tomorrow evening, May 3, Mercury will be next to the beautiful Pleiades cluster in Taurus in the west-northwest sky (see star chart below). Mercury will be easily visible as the “evening star” but you may need binoculars to find the Pleiades through the twilight glow. Mercury and the Pleiades will be in the same field of view of your binoculars through May 6. On the evening of May 12 you’ll be able to see a very thin waxing crescent moon closer to the horizon than Mercury and right next to the moon will be brilliant Venus. This will be the closest pairing of the moon and Venus this year and it will be a beautiful sight! On May 13, the waxing crescent moon will be next to Mercury but Mercury won’t be as bright as it is tonight, May 2. On May 15 the moon will be next to Mars in the constellation of Gemini. On May 17, Mercury will be at its greatest distance from the sun on our sky (“elongation”) and then it will plunge quickly back toward the sun for the rest of the month. On May 19 the moon will be at first quarter phase in Leo.
Jupiter and Saturn continue doing their thing, outshining the surrounding stars of Capricornus in the pre-dawn hours. Saturn will be visible by about 1:30 a.m. and Jupiter about 50 minutes later.

The more people we can get vaccinated, the less evolutionary playground we give the COVID-19 virus to innovate, so check out myturn.ca.gov for the clinic closest to you and please continue wearing a mask! Even if you’ve had COVID-19, you should still get the vaccine because we don’t know how long immunity from an actual COVID-19 infection lasts and the vaccine prevents a severe illness if you get infected again. 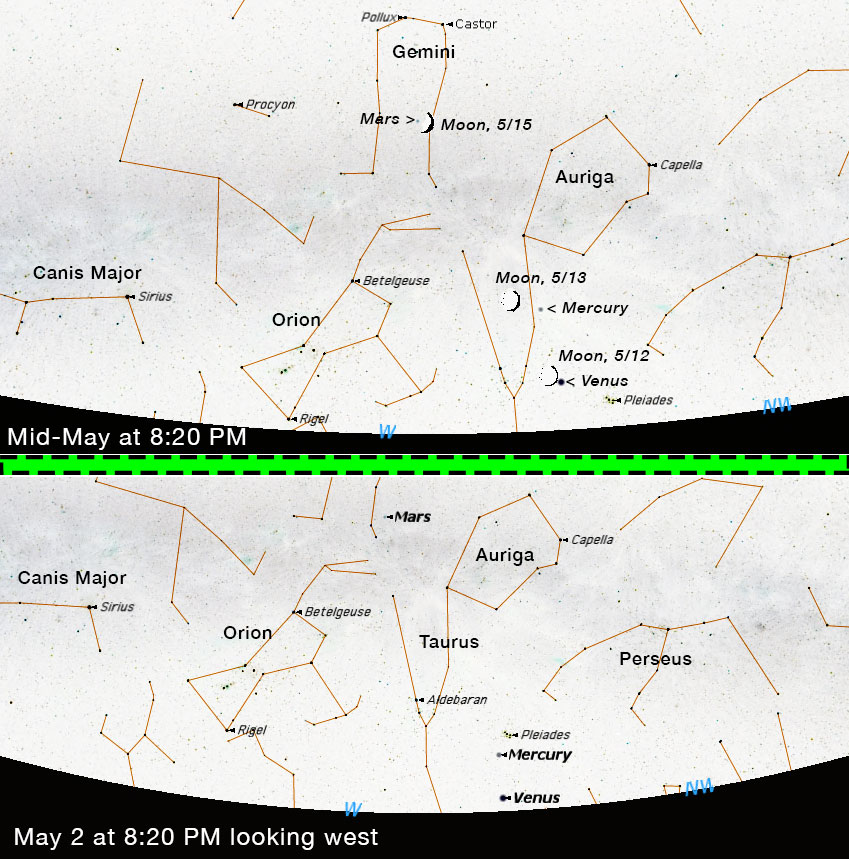