Well, it looks like the Ingenuity Mars Helicopter gets to tag along with the Perseverance rover for a while longer. All of the engineering flight tests turned out successfully, so the team is going to try out how to use Ingenuity to do some scouting of the terrain from up to ten meters above the surface. The Ingenuity team will test out making aerial observations of areas not accessible to Perseverance as well as making detailed stereo imaging from high above the ground. In the meantime Perseverance is going to be busy exploring its immediate surroundings as it searches for signs of ancient microbial life.

The OSIRIS-REx spacecraft is now heading back to Earth to return its samples of the near-Earth asteroid Bennu that it has been exploring since 2018. It’s not a straight-line shot from Bennu and OSIRIS-REx will travel about 1.4 billion miles, orbiting the sun twice before catching up to Earth. When it does so, it will release the capsule holding the Bennu samples that will land at the Utah Test and Training Range on Sept. 24, 2023.

OSIRIS-REx’s sample is the largest sample brought back by a NASA mission since the Apollo missions to the moon decades ago. Pieces will be distributed to laboratories around the world but 75% will be set aside for future generations of scientists to study with new technologies still to be invented. It’s nice to know that some government-funded research is thinking in the long-term.

Another long-term type of research is trying to understand all the details of climate change which won’t affect our generation as much as it will our children and grandchildren. Sometime within the next few weeks, NASA will formally approve the next generation of Earth-observing science satellites. Two of the greatest uncertainties in the earth science aspect of climate change are clouds and aerosols (tiny particles dispersed in the air), so the Earth system observatory will focus on detailed global measurements of the interaction of cloud formation through the help of aerosols, the removal of aerosols through precipitation, the lofting and redistribution of aerosols through winds and updrafts (convection), and how clouds and aerosols trap energy from the ground or reflect sunlight back out to space. The greatest uncertainty in figuring out the future of climate change for our children and grandchildren is, of course, not earth science but political: what choices individuals, communities, and governments will make in how we produce and use energy. The earth science can tell us what will happen based on the political choices we make but sometimes the political choices are influenced by what the earth science tells us, so we need to make sure we truly understand the earth science.

Tomorrow evening, on May 17, Mercury will be at its greatest distance from the sun on our sky (“elongation”) and then it will plunge quickly back toward the sun for the rest of the month. On May 19 the moon will be at first quarter phase in Leo. This month’s full moon on the night of May 25/26 will be a special event.

In the early pre-dawn morning of May 26 will be the first total lunar eclipse in over two years. This month’s full moon is a “supermoon” when full phase occurs within 24 hours of being at perigee, when the moon is closest to Earth in the moon’s slightly elliptical orbit. Perigee will have happened about 9.5 hours before the moon is directly behind Earth with respect to the sun. This total lunar eclipse is going to be brief though with totality lasting just from 4:10 a.m. to 4:28 a.m. because the moon will stay on the north side of Earth’s umbra. When the full moon goes through the center of the umbra, totality can last up to 1.75 hours long but not this time—just 18 minutes of totality.

Starting at 2:45 a.m., look south-southwest about 30 degrees above the horizon at the full moon among the stars of Scorpius to see the moon start entering the umbra (see the star chart below). When totality starts at 4:10 a.m., the moon will still be at the head of Scorpius but the sky will have shifted, so the moon will be only 15 degrees above the southwest horizon (about 1.5 fists at arm’s length). The moon will set for us before it is entirely outside of the umbra. 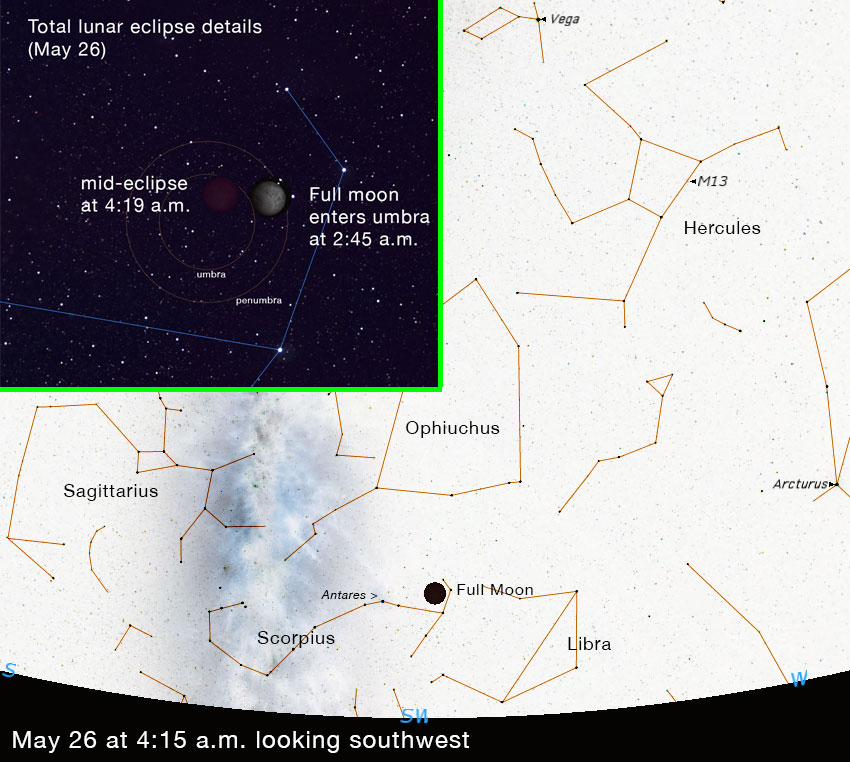