Spring officially arrived with the vernal equinox at 8:50 p.m. on March 19. That is when the sun crossed the celestial equator (projection of Earth’s equator onto the sky) heading northward which it will do until the June solstice in mid-June. We now have more than twelve hours of daylight and the length of daylight will increase until the solstice.  Using the equinoxes and solstices to mark the beginnings of the four seasons is a convenient way to standardize the passage of time around the world and works whether you’re in a place that has long stretches of cold with short stretches of heat or the other way around. The seasons in the southern hemisphere are six months opposite ours but the equinoxes and solstices, based on the position of the sun with respect to the celestial equator, still mark the transitions between the seasons.

Orion and his entourage of Taurus, Gemini, Canis Major, Canis Minor, and Auriga are high in the south at sunset but as we head further into the season of spring, we will see them set in the west closer to sunset. The appearance of Leo in the east during the evening happens with the arrival of spring. You find the head of Leo by extending the line of the two stars at the end of the bowl of the Big Dipper part of Ursa Major down (southward) below the bowl and look for a backward question mark on the sky. That’s the head and chest of the lion. The triangle to the left of that is the hip and tail of Leo.

A saying I heard growing up was that March came “in like a lion and out like a lamb”. In grade school, we made lion and lamb masks out of paper plates—an effective way to make sure we kids remembered the saying. Where I grew up, the beginning of March could be a bit stormy and the weather usually calmed down a bit for April, so I thought the saying had to do with the weather patterns.

Well, that wouldn’t work for Bakersfield and other places in the southwest part of the U.S., so I thought the saying might have to do with the Leo rising in the east in the evening during March.  The only lamb-related constellation is Aries and it is rising in the evening sky in September. In March Aries is rising a couple of hours after sunrise. Well, that dashes my hope of trying to find an astronomical reason for the saying.

In this evening’s sky, Mars is the lone planet (see the star chart below). It is at the head of Taurus the bull about half a fist width at arm’s length above the orange-red eye of Taurus, the star Aldebaran. Compare their colors. Which one is redder? At the end of the month, Mars will be next to the western horn.

Perseverance is going through its paces as all of the systems are checked out. Thousands of pictures have already been sent back in the first month which is about on par with my picture-taking rate when on a trip. One particularly stunning picture is a full 360-degree panorama from its landing spot. Oh the places we’ll go!

The Perseverance team is working with the Navajo Nation to name features of scientific interest with words in the Navajo language. The surface missions give nicknames to features to provide a common reference for the team members that is easier to remember than something like “rock #42 at site #3”. Previous missions used names of geological regions on Earth and people and places related to expeditions. Perseverance touched down in a quad region named after Canyon De Chelly National Monument which is at the heart of the Navajo Nation in Arizona. The first rock that was examined closely is named “Máaz” which means “Mars” in Navajo. Navajo Nation President Jonathan Nez hopes that the partnership they built with NASA will help revitalize their language.

Sometime within this next month, the Ingenuity helicopter should be released. Its sole purpose as a technology demonstrator is to see if it’s possible to fly on Mars for even just a few feet. It does have two cameras on board, a color one and a black-and-white one. If we get pictures from the helicopter, that’ll be icing on the cake.

The other two recent arrivals, the UAE’s Hope orbiter and China’s Tianwen-1, have also sent back beautiful pictures as well. Older orbiters continue their work, including the Mars Reconnaissance Orbiter which is now in its fifteenth year and the longevity champion, Odyssey, has been orbiting Mars since October 24, 2001.

The moon is at first quarter phase next to the feet of Gemini high in the south at sunset. Next Sunday, March 28, it will be full phase among the stars of Virgo. In the pre-dawn morning, look for Jupiter and Saturn low in the east on either side of Capricornus. Jupiter will be the brightest thing you will see in the eastern sky just before sunrise. 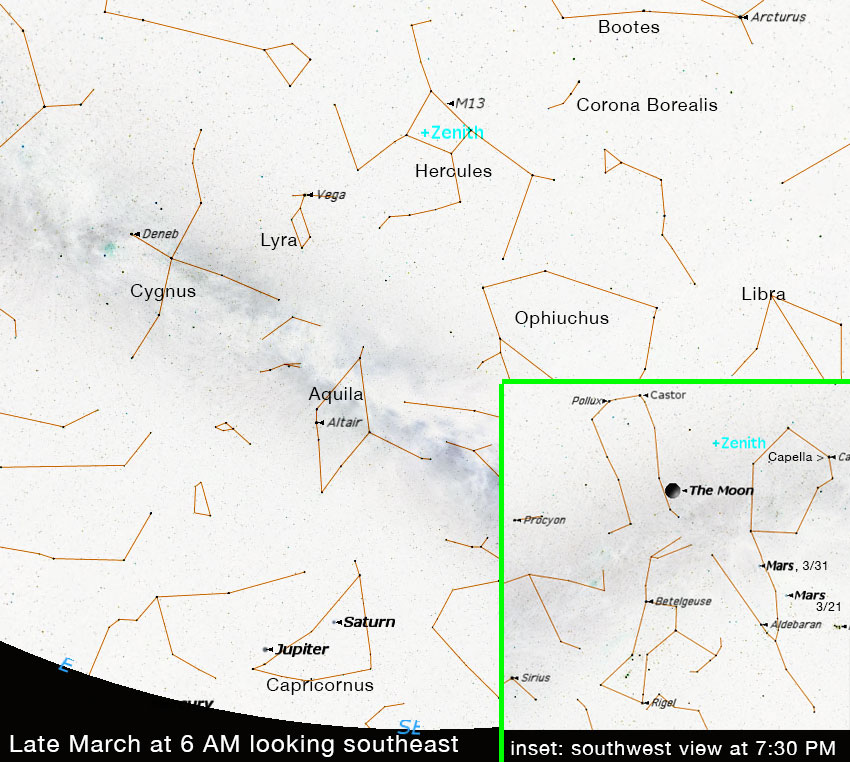