As the sun climbs northward, its energy will be hitting our part of Earth more directly, concentrating the sunlight power and it will remain above our horizon for a longer time, increasing the heating time. The result is warming temperature in our hemisphere. The southern hemisphere is seeing the sun drop lower in the sky and the amount of daylight decreasing, so they are going into autumn there.

The evening after the March equinox, on March 21, the William M Thomas Planetarium will present the ever-popular “Black Holes” show. One week later, on March 28, the William M Thomas Planetarium will present “Dawn of the Space Age” in honor of the 50-year anniversary of the Apollo 11 landing on the moon. I recently watched “First Man”, a movie about Neil Armstrong from his X15 days to Apollo 11. The movie shows the human side of Armstrong with all the great courage and disappointments being human entails. The movie reminds us that the astronauts were flesh-and-blood humans, often creating new techniques and procedures as they flew in space, a bit more “flying by the seat of your pants” than our current return to manned spaceflight.

Those interested in tracking the increasing light pollution have a new tool, the Radiance Light Trends website at https://lighttrends.lightpollutionmap.info that became operational on March 6. The site is constantly updated and users can select areas up to 5000 square kilometers to see how the light pollution has changed since 1992. For example, the Bakersfield metro area has increased light pollution by about 1.4% per year. Light pollution now affects nearly 80% of the globe.

Economists are using the nightlight data to study economic development and the impact of government policies and natural disasters. For example, you can select parts of Puerto Rico to see how Hurricane Maria knocked out the power grid in 2017. You can clearly delineate the border between North and South Korea (North Korea is quite dark). We can use the website to analyze the impact of new development and amateur astronomers can use it to find good observing sites.
The Mars InSight lander has hit a snag in its mission. The heat probe designed to dig down to 16 feet below the surface to measure the heat flow in the planet has hit a large rock or gravel about three-fourths the way down. The heat probe is able to push aside small rocks or wend its way around them but it’s now stuck between a rock and hard place, so the heat probe team has paused the digging of the “mole” to analyze options.

In the meantime, check out the weather at Elysium Planitia. InSight has the usual weather instruments (except a rain gauge). When I last checked the weather, highs were in the single digits and lows were around -140 deg F with winds 25 to 35 mph. There are large swings between day and night because Mars’ atmosphere is so thin. Surface pressure at Elysium Planitia varies between 692 and 749 Pascals. By comparison, Earth’s air pressure at sea level is about 101 kilopascals, or 135 times greater than what InSight is measuring at Elysium Planitia.

Mars is the lone planet in our evening sky. It continues to dim but it is still one of the brightest objects in the west-southwest between Aries and Taurus. A waxing gibbous moon washes out the dim stars of Cancer. Tomorrow the moon will be right next to Regulus in Leo. If you have a nice flat southern horizon, you might be able to spot the second-brightest star in the night sky, Canopus. In the evening, draw a line almost straight down from Sirius (the brightest star in the night sky). Canopus is about13,300 times as luminous as the sun, so even though it is over 300 light years away from us, it looks quite bright in our sky. Canopus is in the dying stages of its life, probably fusing helium to make carbon and oxygen in its core.

Jupiter rises at about 2:15 a.m. with the stars of Ophiuchus and in the middle of the widest part of the Milky Way. Saturn rises at about 4 a.m. to the left of Sagittarius and Venus will rise shortly before 6 a.m. at the tail-end (left) side of Capricornus. Jupiter and Venus will be the two very bright “stars” in the morning sky with Jupiter closer to south by the time Venus becomes first visible. 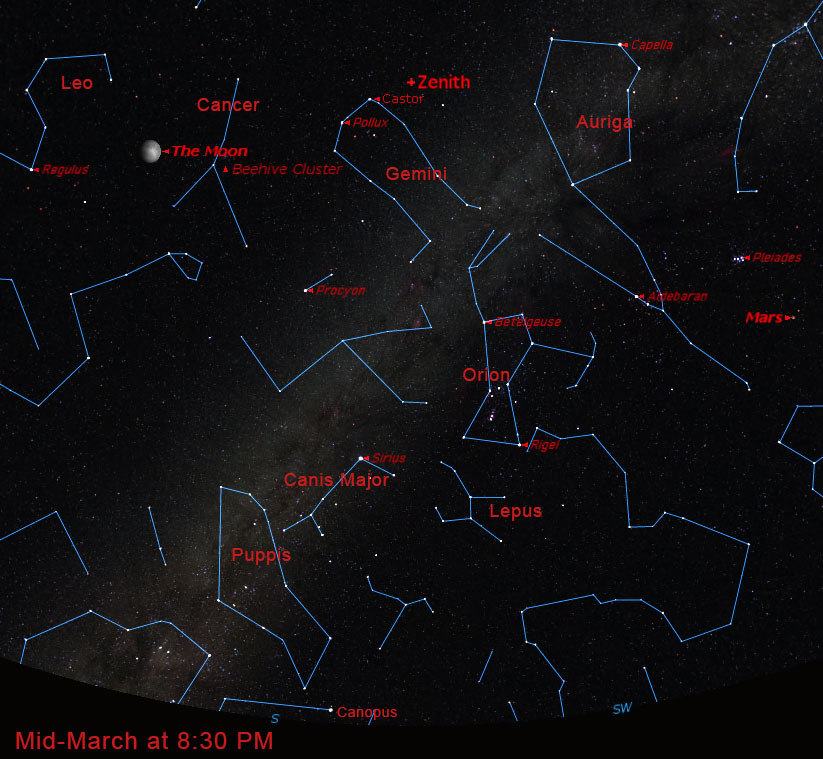