In mid-November 2018, the Mars 2020 rover had a destination finally picked out—Jezero Crater, but it took over another year to give it a name. Nine names were in the running for the online poll: Tenacity, Endurance, Vision, Ingenuity, Clarity, Promise, Courage, Fortitude, and Perseverance. The naming process began in August 2019 when K12 students across the nation were invited to submit names and write a short essay about it. More than 28,000 essays were submitted and a volunteer panel of almost 4700 judges narrowed the pool down to 155 semifinalists and then to nine finalists. In mid-January 2020, the online poll with over 770,000 voters chose seventh grader Alexander Mather’s submission of “Perseverance”. Mather and his family will be able to travel to Cape Canaveral in Florida in July for the launch of Perseverance.

All 155 semifinalists proposed names and essays will be stenciled onto a silicon chip that will be attached to Perseverance with lines of text that would make a lawyer envious of the fine print, smaller than one-thousandth the width of a human hair. It will be someone from Mather’s generation who will be on the Artemis missions to the moon’s south pole where we know water ice exists in crater floors that never see sunlight and later to Mars. Mather got hooked on space exploration in 2018 after visiting Space Camp in Alabama. In true NASA fashion, Mather said he wanted to help pave the way for human exploration of Mars by coming up with a name and writing the essay because “refusal of the challenge was not an option.”

Perseverance will land in Jezero Crater on February 18, 2021. Jezero Crater is an impact crater on the western edge of Isidis Planitia just north of Mars’s equator. Isidis Planitia has some of the oldest and most scientifically interesting areas to explore and Jezero Crater itself has the remnants of an ancient river delta in which ancient organic molecules and possibly the remains of microbial life are preserved. Well, if microbial life ever existed on Mars, Jezero Crater is probably the best place at the surface for us to look. The clays and carbonates in the river delta would be able to preserve signatures of past life from a time 3.6 billion or more years ago when Mars was a much more comfortable place. The river delta also contains a variety of minerals from inside and outside the crater that would have drained the large watershed into the river delta.

Perseverance will have the instruments needed to look for biosignatures—ideal signs of ancient life such as carbon isotope ratios and enhanced ratios of hydrocarbons over and above what would be produced through geological processes. Perseverance will also cache samples for later return to Earth for analysis using equipment that is much too large to send to Mars. I chose the name “Promise” in the online poll because I think with the rover onsite or from the samples returned to Earth, we’re going to know whether or not life ever existed on Mars. However, perseverance, “sheer grit”, is an absolutely vital ingredient to any human achievement and exploration. It’s something we at B.C. tell our students and although the first word in the “It’s POSSIBLE”  part of the “Habit of Mind” campaign a few years ago is “persist”, the word “perseverance” also would describe that same stubbornness to succeed.

Here in Bakersfield, interesting astronomy things begin this week on Wednesday, March 18, with the showing of the ever-popular “Black Holes” at the William M Thomas Planetarium. The following evening on March 19 and 8:49 p.m. marks the official start of spring with the vernal equinox. That is when the sun passes north of the celestial equator. On the following days of spring and summer, the sun will rise in the northeast and set in the northwest. Later on the equinox night, the early morning of March 20, Mars will be just 0.7 degrees (less than a thumb-width at arm’s length) to the lower right of Jupiter. Mars and Jupiter will become visible at about 4:15 a.m. on the left side of Sagittarius. Saturn will become visible about twenty minutes later. Mars will pass less than a degree from Saturn on March 31. The waning crescent moon will be in the midst of the three planets on the morning of March 18 (see the star chart).

In the evening sky, Venus continues its reign as the evening star blazing away in the west in the constellation Aries. It’s hard to believe but it will get even brighter throughout the rest of March. By the end of the month, it will be right next to the Pleiades, the gorgeous star cluster at the shoulder of Taurus. Before then on the evenings of March 27 and 28, a thin sliver of the waxing crescent moon will be next to Venus, making a beautiful sight (see the star chart). 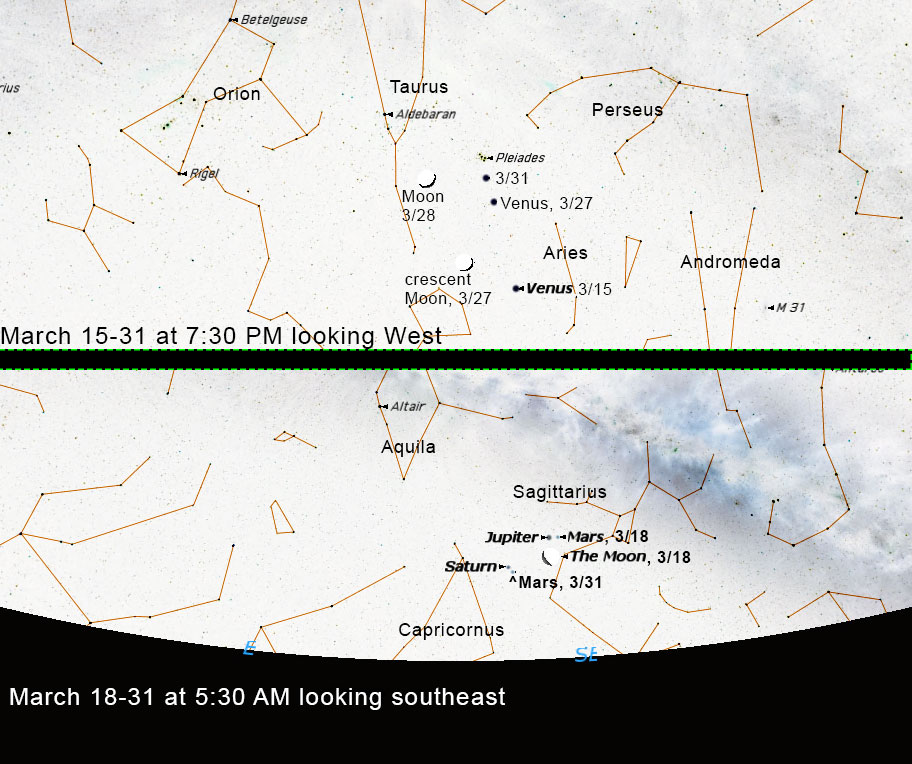