Earth actually takes slightly more than 365.25 days to orbit the sun as measured with respect to the stars. This “sidereal year” is 365.2564 solar days long, where a solar day is measured between successive passages of the sun across the meridian at our due south point. Our calendars, however, are not based on the sidereal year. Instead, our calendars use the “tropical year” that takes into account the very slow wobble of Earth’s rotation axis, called “precession”. The precession of Earth’s rotation axis takes about 26,000 years to go through a full cycle and it is why the north star changes through the millennia. When the Babylonians were a major power in 2000 B.C.E, the star Thuban in the constellation Draco was the closest bright star to the North Celestial Pole (the projection of Earth’s north pole into space). In the time of Jesus Christ, the north star was Kochab in the bowl of the Little Dipper (Ursa Minor). Today, Polaris at the end of the handle of the Little Dipper is our north star. In another 8000 years from now, Deneb at the tail of Cygnus the Swan will be our north star and 12,000 years from now, Vega, the bright star of Lyra will hold that honor.

That precession means that the sun will not be at exactly the same position with respect to the celestial equator (projection of Earth’s equator out into space) after one sidereal year. Our spring and autumn seasons officially begin at the time when the sun crosses the celestial equator, called the equinoxes. For the year 2020, the vernal equinox that marks our start of spring is on March 19 (at 8:49 p.m. to be more precise). The tropical year is the time interval between two successive vernal equinoxes. The tropical year is 20 minutes shorter than the sidereal year or 365.2422 solar days. Our calendars use the tropical year to ensure that our seasons stay in sync with the calendar.

One other timekeeping thing happening in March is daylight savings time which starts next Sunday morning, March 8. The following day is going to be a “supermoon”. Full moon will be at 10:48 a.m. Pacific Daylight Time and the closest point in its orbit around Earth (perigee) will be at 11:29 p.m. The following week on Wednesday, March 18 will be the Black Holes show at the William M Thomas Planetarium.

One interesting piece of astronomy research is analysis of New Horizons’ January 2019 flyby of the Kuiper Belt object Arrokoth (formerly known as “Ultima Thule”). Arrokoth orbits the sun at a distance on average 440 million miles farther out than Pluto and it appears to be a truly pristine object that has not changed since it formed 4.6 billion years ago. It is made of two objects that slowly came into contact with each other, so it looks like two flattened round pieces stuck together—a “contact binary”. A number of other Kuiper Belt objects beyond the orbit of Pluto also appear to be contact binaries. The flattened shapes of both lobes also suggests that they each formed by a gentle accumulation of particles in a collapsing cloud of gas.

This formation scenario is in marked contrast with the violent, high-speed collision histories thought to have occurred throughout the solar system. We thought the usual scenario was the build-up of dust-grains to pebbles to rocks to boulders to planetesimals all independent of each other. Eventually one of the planetesimals would get larger than others in its neighborhood and then start pulling in the other smaller pieces through its gravity. Those pieces would have hit at very high speeds, so the mathematical models have had a hard time building up planets without them blasting each other apart. If the planets formed more like what Arrokoth is indicating, through pebble clouds collapsing under their self-gravity, then maybe that process is gentle enough to create big enough planetesimals that can survive the collisions that did certainly later occur in the inner solar system as the big planets migrated inward then outward and even swapped orbits.

Today the solar system is much calmer. Collisions do still occur but not as often, fortunately. In tomorrow morning’s pre-dawn sky you’ll see the three outer planets easily visible to the naked eye, Mars, Jupiter, and Saturn making a nice line in the sky equally distant from each other (see the star chart below). They will be in the left (east) side of Sagittarius. Mars will pass by Jupiter in a couple of weeks and then Saturn at the end of the month. A waning crescent moon will pass by the trio in a couple of weeks as Mars nears Jupiter. In our evening sky, Venus continues to blaze in the west. 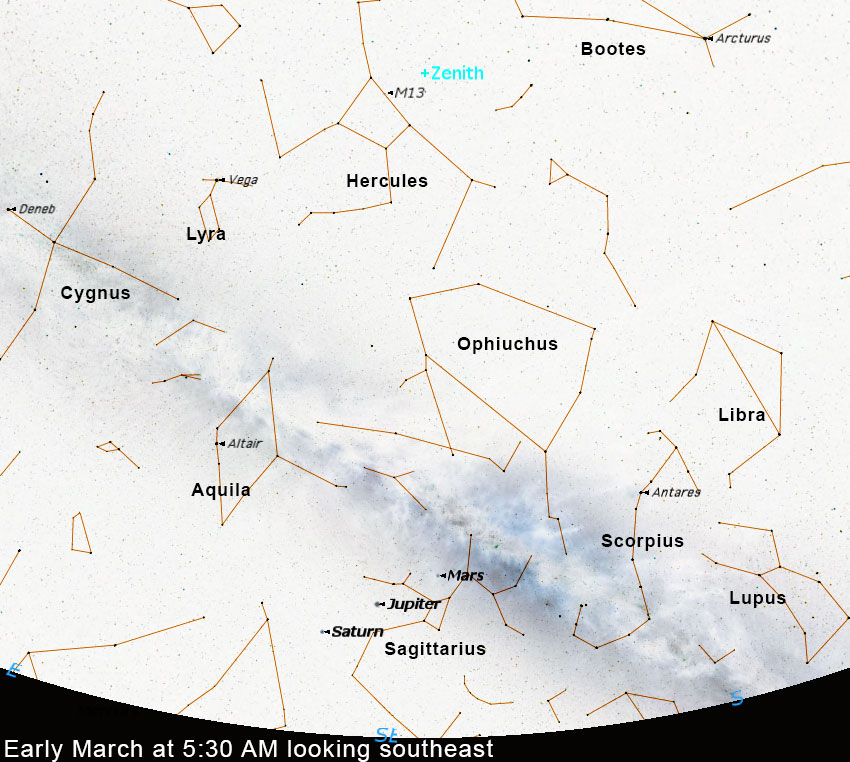