The United States is now back to launching people into orbit from its own soil. Last weekend a SpaceX Falcon 9 rocket with a Crew Dragon on top put NASA astronauts Robert (Bob) Behnken and Douglas (Doug) Hurley into orbit for a docking with the International Space Station several hours later. The two astronauts will stay on the ISS until September. Before they leave the ISS, another SpaceX Crew Dragon capsule will bring four astronauts to the ISS at the end of August. It has been nine years since the retirement of the Space Shuttle fleet and I’m so glad the wait for putting people into space is over!

Last week an international team of astronomers from Australia, United States, and Chile reported their measurements of the amount of ordinary, regular matter in the intergalactic medium (super-rarefied material between the galaxies) that fill in a long-standing nagging gap in theories about the structure of the universe. The ordinary, regular matter we’re all familiar with is made of atoms which are, in turn, composed of proton, neutron, and electrons. A number of different, independent types of measurements of various features coming from different times in the universe’s history have shown us that ordinary matter makes up just 5% of the matter-energy of the universe with the other 95% made of real strange stuff that we’re in the dark about: dark matter (27% of the total) and dark energy (68% of the total). The inventorying of all the regular matter we could detect in galaxies and gas clouds, though, was off by a factor of two. The other half would have to be found in between galaxies and be very, very spread out, so it would be extremely hard to detect. But seeing is believing, so astronomers have been trying for a long time to measure it.

Using the radio waves coming from objects called “fast radio bursts” which are intense millisecond pulses of radio waves from distant galaxies, the astronomers were able to get a measurement of the amount of material in the intergalactic medium. As they travel through the material, different wavelengths of the radio waves will get slowed down by varying amounts that depends on the density of the material. Measuring the lag time of the longer wavelengths of radio in the bursts compared to the shorter wavelengths in the bursts gives us the amount of material in the intergalactic medium. That measurement is equal to what is needed to explain the rest of the “missing” ordinary matter. I’m sure you’re as relieved as I am.

During all of June, the Asteroid Day team will be offering asteroid-related content for all ages including academic documentaries, family learning programs, current asteroid mission highlights, origins of the planets, and a lot more. Asteroid Day was co-founded by Dr. Brian May, astrophysicist and lead guitarist of QUEEN, together with Danica Remy, President of B612 Foundation, Rusty Schweickart, Apollo 9 Astronaut, and filmmaker Grig Richters to inspire the world about the role of asteroids in the formation of our solar system, mining of asteroids, using them as way stations for deep space human exploration and how we can protect our planet from asteroid impacts. Although Asteroid Day is on June 30, the Asteroid Day team put together 34 days of content that will be broadcast from https://asteroidday.org .

Venus is no longer in our evening sky. Mercury is the only planet we’ll be able to see in the early evening just after sunset but we have this week to see it before it gets too close to the sun on our sky and gets lost in the brown dust layer on our horizon. At about 11 p.m., you’ll be able to see the two giant planets, Jupiter and Saturn rising in the southeast with the stars of Capricornus. A waning gibbous moon will be to the right of the pair among the stars of Sagittarius. The orange-red planet Mars will become visible in the east shortly before 2 a.m. Mars is getting brighter and bigger as we catch up to it. We’ll be “right next to it” in early October, so we have all summer to watch it grow in brilliance (and detail through a telescope). 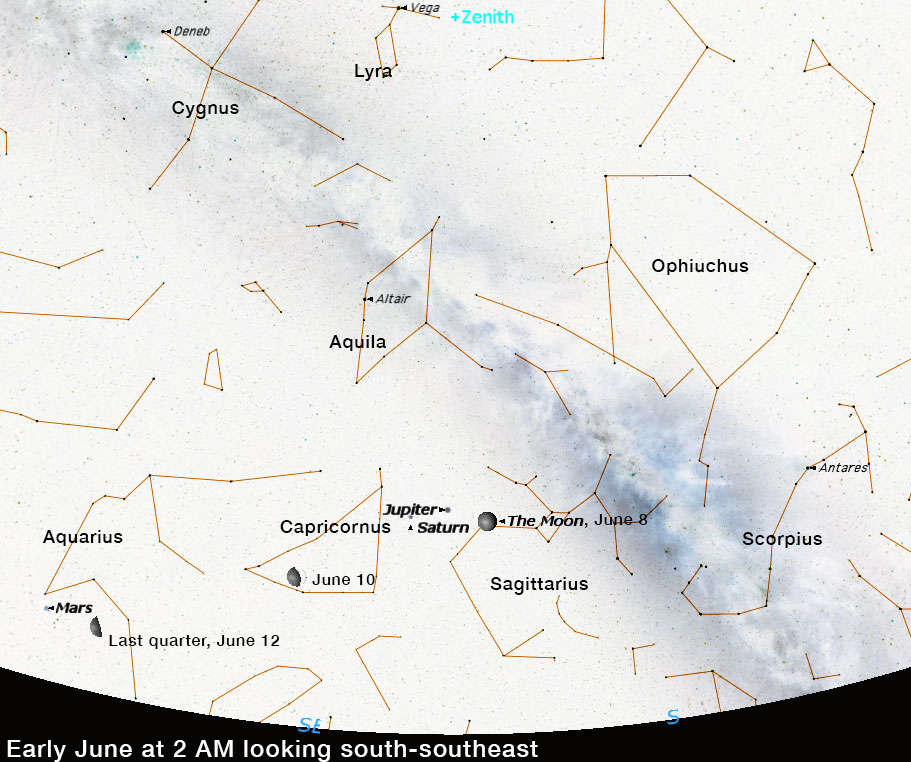