A couple of weeks ago was the first total lunar eclipse in over two years. Two weeks before or after a lunar eclipse will usually be a solar eclipse and there is one happening on the morning of June 10. However, only those the eastern U.S. and Canada, and northern Greenland will be able to see it. Because last month’s lunar eclipse occurred at a “supermoon”, when the full moon is closest to Earth in the moon’s slightly elliptical orbit, the new moon for this week’s solar eclipse is going to be near the farthest distance from Earth (apogee). That means that the new moon will not block all of the sun’s bright surface and we’ll have an annular solar eclipse, so observers will need to continue looking through a solar filter.

For observers in Canada and Greenland, the moon’s diameter will appear about 94% the diameter of the sun, so there will be ring of sunlight around the dark moon. About 89% of the sun’s light will be blocked, leaving 11% to blind anyone who doesn’t use special solar filters to view the sun. Observers in northeastern U.S. will not see the annular solar eclipse but they will see a partial solar eclipse at sunrise—a crescent-shaped sun rising instead of the usual round solar disk.

Ten days later, on June 20, will be the official start of summer with the June solstice occurring at 8:32 p.m. Pacific Time, although we’ve been having some scorchingly hot days already. The June solstice is when the sun reaches its northernmost position on the sky. During the spring and summer, the sun’s rays hit our part of the earth more directly (closer to perpendicular), so the cooking power of the sun is greater and the sun is above the horizon for a longer time, so the cooking time is longer. Land and water don’t heat up instantly, so our consistently hotter days are later in summer in the same way it takes a cake or pie some time to bake in your oven.

In the first few days after the June 10th solar eclipse, we will be able to see the thin waxing crescent moon hanging low in the western sky shortly after sunset ( see the star chart below). On June 11 a very thin crescent moon will be to the lower right of Venus, the bright “evening star” you see a little more than a fist-width at arm’s length above the western horizon just after sunset. For the conjunctions of Venus and the moon in the following months, the crescent moon will be thicker when it is next to Venus, so the June 11 conjunction will be particularly striking. Two days later on June 13, a fatter crescent moon will be next to Mars. This time the moon will be to the upper left of Mars. Mars is about halfway between the bright star Pollux at the head of the left twin of Gemini and the Beehive Cluster near the heart of the constellation Cancer. On June 17, the moon will be at first quarter phase, when it is one-quarter of the way in its orbit around Earth, so it will appear half lit up. 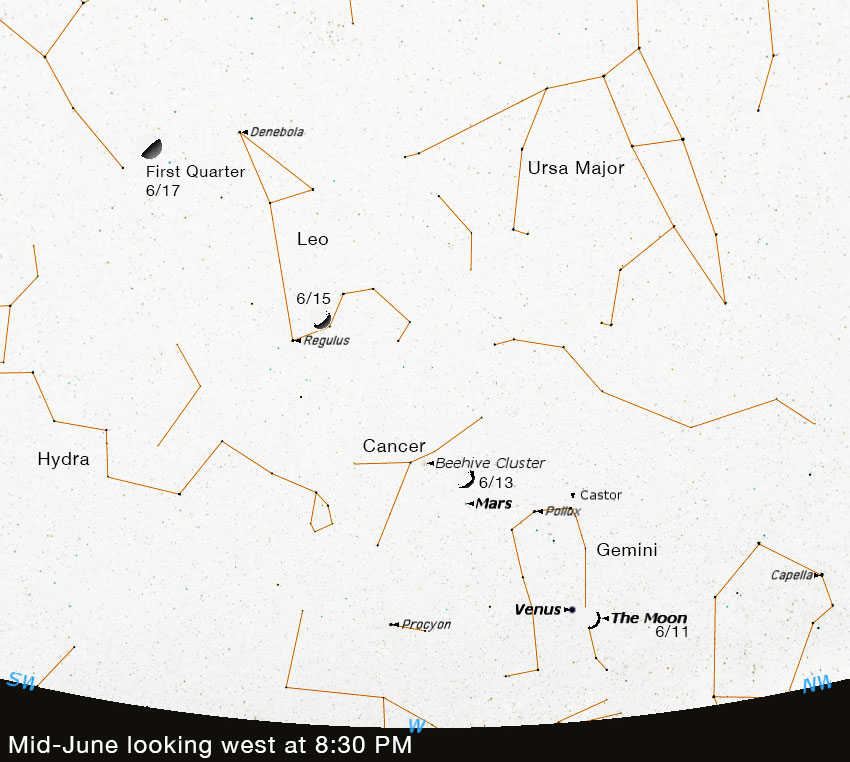