Today is the official start of summer with the the June solstice occurring at 8:32 p.m. Pacific Time. Meteorologically, summer started several weeks ago for the Central Valley and other parts in the West. The June solstice is when the sun reaches its northernmost position on the sky. During the spring and summer, the sun’s rays hit our part of the earth more directly (closer to perpendicular), so the cooking power of the sun is greater and the sun is above the horizon for a longer time, so the cooking time is longer. Land and water don’t heat up instantly, so our consistently hotter days are later in summer in the same way it takes a cake or pie some time to bake in your oven.

The brilliant evening star you see low in the west shortly after sunset is the planet Venus. On the evenings of June 24 and 25, Venus and the two brightest stars of Gemini, Castor and Pollux will form a nice line-up (see star chart below). The far brighter Venus will be on the left, Pollux will be in the middle, and Castor will be on the right. The evening before, June 23, will see Mars near the center of the Beehive Cluster in Cancer, the Crab. The moon is at full phase on June 24. Four days later in the early pre-dawn morning of June 28, you’ll see the waning gibbous moon in between the two largest planets of the solar system, Jupiter and Saturn.

Several weeks ago SpaceX launched another set of satellites for its Starlink broadband internet network. There was a bit of buzz about them in the media as people easily saw the set of new satellites move across the sky as a constellation of bright points before the satellites assumed their position in the Starlink orbits and would be much dimmer. For many people it was a thrilling sight and websites such as Heavens Above (www.heavens-above.com) and Find Starlink (www.findstarlink.com) can be used to find out when the satellite chain will pass over your location.

However, it is very bad news for research astronomy from the ground. All those thousands of satellites will make thousands of bright streaks across astronomical images. Even if the companies could devise sunshades and non-reflective painting to make the satellites invisible to the naked eye, they will still be easily seen by telescopes. For the Vera Rubin Observatory’s large telescope, a dimmed Starlink satellite will still be about 40 million times brighter than a typical galaxy.

The Vera Rubin Observatory is being built in Chile and will become operational in 2022. It is designed to conduct a deep survey (looking at very faint dark things) of the entire sky every few nights in multiple wavelength bands with a 3.2 billion pixel camera the size of a small car and weighing more than 3 tons. Decades in the planning and building, VRO was designed to answer questions such as: What is the mysterious dark energy that is driving the acceleration of the cosmic expansion? What is dark matter, how is it distributed, and how do its properties affect the formation of stars, galaxies, and larger structures? How did the Milky Way form, and how has its present configuration been modified by mergers with smaller bodies over cosmic time? What is the nature of the outer regions of the solar system? Is it possible to make a complete inventory of smaller bodies in the solar system, especially the potentially hazardous asteroids that could someday impact the Earth? Are there new exotic and explosive phenomena in the Universe that have not yet been discovered?

Though research observatories have software that can remove satellite streaks from their data, the software is going to be overwhelmed by the tens of thousands of satellites that are going to be put up in low-Earth orbit within the next few years. Representatives from Starlink, OneWeb, and Project Kuiper met with astronomers at the American Astronomical Society’s “SATCON1” conference last summer to see what could be done to dim the satellites below naked eye detectability but there is no way to shield them from the large research telescopes. The Rubin Observatory staff have said that if satellites can be dimmed to seventh magnitude, which is just below naked eye visibility on a dark sky, they might be able to reject the satellite streaks from their data. Unfortunately, even with the new sunshade, painting and orientation of the satellites, Starlink has not been able to achieve the seventh magnitude threshold. It is doubtful that OneWeb, Project Kuiper or any of other companies will be able to do any better. 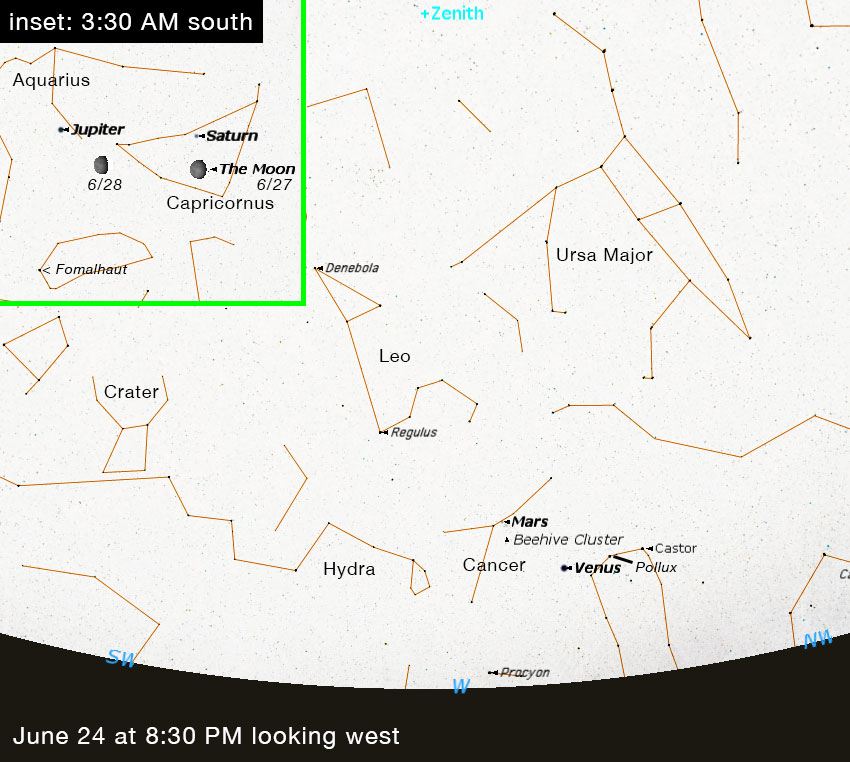