Although my calendar says that summer officially begins on June 21 with the June solstice, it feels like summer is already in full swing as the Bakersfield weather makes up for lost time with the pleasant, cool days we enjoyed in May. On June 21 at precisely 8:54 a.m. Pacific Daylight Time, the sun will reach its farthest north position among the stars and briefly hesitate before heading southward for the next six months. The word “solstice” comes from the Latin “solstitium” which was the combination of “sol” (sun) and “stit” (stopped, stationary), so the word describes the point when the sun temporarily stops its northward or southward motion. For the mathematicians, it is the point of the sinusoidal curve of the sun’s position vs. time where the slope equals zero. (Just thought the STEM readers would enjoy some math lingo).

The day of the June solstice marks the highest altitude the sun reaches as it crosses the meridian due south. For Bakersfield, that is about 78.1 degrees above the south horizon. It also marks the farthest northeast sunrise and northwest sunrise for the year and longest daylight, although it won’t be the earliest sunrise or the latest sunset of the year due to a peculiar thing called the “Equation of Time”. The Equation of Time describes the difference between the variable motion of the true sun and the uniform motion of the “mean sun” that our timekeeping devices use. The latest sunset for us will be on the last few days of June and the earliest sunrises for us were in the second week of June. If you want more details about the Equation of Time, then check out www.astronomynotes.com/nakedeye/s9.htm . Like baking something in the oven, the land and water don’t heat up instantaneously, so our hottest days are still to come later this summer.

In our early evening sky you may be able to see Mars and Mercury low in the west-northwest during twilight among the stars of Gemini but they’ll set before twilight ends. The full moon will be slightly left of bright Jupiter among the stars of Ophiuchus (between Scorpius and Sagittarius). See the star chart below. Jupiter will already be above the horizon at sunset. Saturn, on the left side of Sagittarius, will become visible at about 10:15 p.m. The waning gibbous moon will be slightly left of Saturn on June 18. The Summer Triangle made of Deneb at the tail of Cygnus, Vega in Lyra, and Altair at the neck of Aquila will be rising in the east.

Before the ALMA observations, astronomers had detected the tenuous super-hot (10 million C) part of the gas spiraling into the black hole to within 0.12 light years of the black hole. The majority of the gas is cooler (just 10,000 C) and ALMA was able to image the swirling gas up to five times closer than before as well as measure the speed of the gas. Further observations will give us more insight into how gas feeds the black hole. For the ALMA image and further details, go to www.almaobservatory.org.

Speaking of swirling gas, a group of astronomers used the Very Large Telescope in Chile (there are a number of world-class observatories in Chile!) to see the gas flowing onto two forming planets that orbit a young star called PDS 70 in the constellation Centaurus. The star is estimated to be just 5 million years old and the two planets we can see are many times the mass of Jupiter, so they’ve grown very quickly. It looks like the two planets are in a 2:1 resonance where the inner planet orbits twice for every one orbit of the outer planet. A similar sort of resonance is thought to have happened with Jupiter and Saturn when our solar system was young, so observing the PDS 70 system will give us insights into our solar system’s formation 4.6 billion years ago. The paper describing the observations is in the June 3 issue of Nature. Since it is behind a paywall, go to Sky and Telescope’s news site at www.skyandtelescope.com/astronomy-news for more about this system.

The William M Thomas Planetarium is closed during the summer break and will re-open for the fall semester with two new shows about the human exploration of Mars. Next KAS star party is July 13 at Riverwalk. 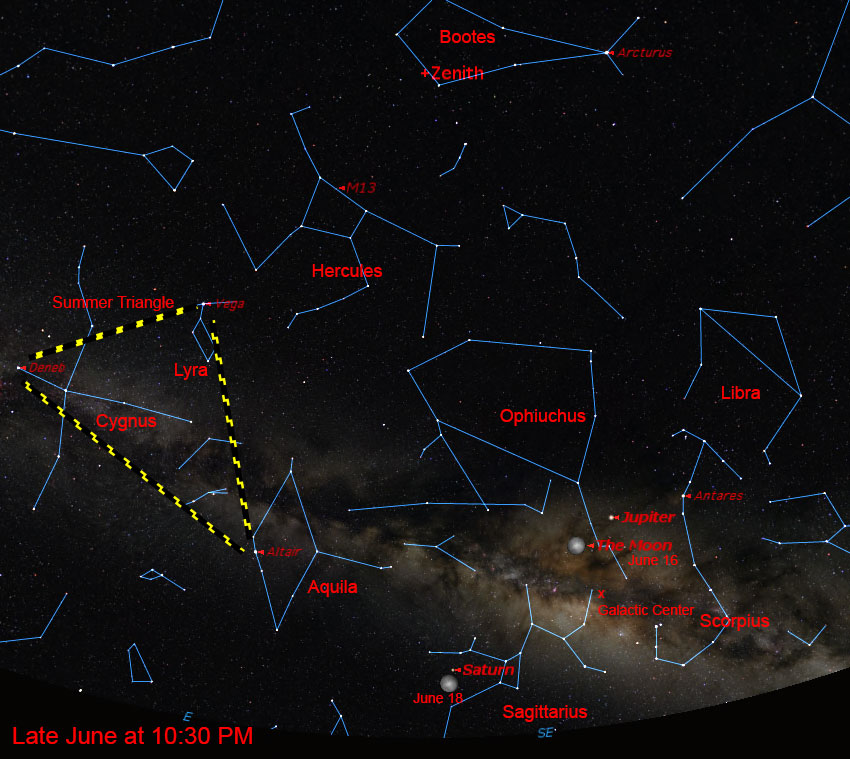