In addition to the celebration of the United States’ birthday, yesterday was also aphelion day when Earth was farthest from the sun at a distance of 94.5 million miles. With all the fireworks that have been going on in my and surrounding neighborhoods for the past month and a half (at least), it looks like people have been celebrating a lot.

This month several nations are launching spacecraft to Mars. Every 26 months, Mars and Earth are at a good arrangement to travel to Mars. Looking down on the solar system from high above the orbital planes of the planets on July 22 when NASA’s Perseverance rover is set to launch, if the Earth is at the 6 o’clock on a 12-hour clock, then Mars is at the 5:03 position. It takes seven months to travel the distance. When Perseverance arrives at Mars on February 18, Earth will be at the 11 o'clock position and Mars will be at the 12:58 position. Two other spacecraft will be launching in July: the Hope orbiter from the United Arab Emirates and China’s Tianwen 1 (“Quest for Heavenly Truth 1”) orbiter-lander-rover. The European Space Agency’s - Russian Roscosmos Agency’s ExoMars lander-rover mission has been postponed to 2022 due to problems with the parachute system.

The Perseverance rover has an extensive suite of instruments designed to look for biosignatures of past and current life in the martian rocks including: organic compounds; minerals in sedimentary rocks associated with life such as carbonates; chemical changes due to metabolic processes; micro-fossils, molds, or casts in the sedimentary rocks from microbes; and  larger-scale structures from microbe colonies such as stromatolite and mat formations. Although Perseverance will have a sophisticated suite of instruments, there are some tests that can only be done with much larger equipment, so Perseverance will be caching rock core samples for later sample-return to Earth in 2031.

The UAE’s Hope (Al-Amal) orbiter is going to focus on studying Mars’ global weather patterns from a significantly higher orbit than other orbiters have used. Its elliptical orbit will carry it between 14,000 and 27,000 miles from Mars. In addition to making scientific contributions to our understanding of Mars, the Hope orbiter is part of the UAE effort to shift its economy from an oil-based one to a technology-based one. The average age of its science team members is just 27 years old and 80 percent are women.

China is making a bold move by having its first Mars spacecraft (Tianwen 1) be an all-in-one mission with an orbiter, lander, and rover. The closest that other nations have come to that approach was the United States in 1976 with the Viking missions which combined an orbiter and a lander. Well, I guess the Pathfinder mission in 1997 can be considered a combo as well with a lander main base and a small microwave-oven sized slave rover that was controlled from the lander.  Since then, we have kept exploration modes separate: either an orbiter or a lander or a rover. China has some experience combining a lander with a smaller rover with its successful Chang’e 3 lunar mission. China is not as transparent as other spacefaring nations, so the most I could find out about the goal of the Tianwen 1 mission from the China National Space Administration website is to “conduct scientific investigations about the Martian soil, geological structure, environment, atmosphere as well as water.”

In our night sky, Mars rises at about 12:45 a.m. with the dim stars of Pisces. Only Jupiter, Venus, and the moon will be brighter than Mars in tonight’s sky. The moon, one day past full phase, will make a right triangle with Saturn and Jupiter. The Saturn-moon side of the triangle will be the short side and all three objects will be between Sagittarius and Capricornus as shown in the attached star chart. The moon will be next to Mars on July 11. Jupiter and Saturn rise shortly after sunset. On July 14, Jupiter will be at opposition, or directly opposite the sun on our sky. Saturn reaches opposition on July 20. At opposition both planets will be at their maximum brightness but both are bright enough now that you should be able to see them next to that very bright moon. High above the moon-Jupiter-Saturn trio will be the Summer Triangle formed by the bright stars, Deneb in Cygnus, Vega in Lyra, and Altair in Aquila. Shortly before 4 a.m., almost two hours before sunrise, you’ll be able to see the very bright Venus rising in the east close to the orange-red eye of Taurus, the star Aldebaran. On the morning of July 11, Venus and Aldebaran will be just one degree apart (the width of your thumb held at arm’s length). A thin sliver of the waning crescent moon will pass by them on July 17. 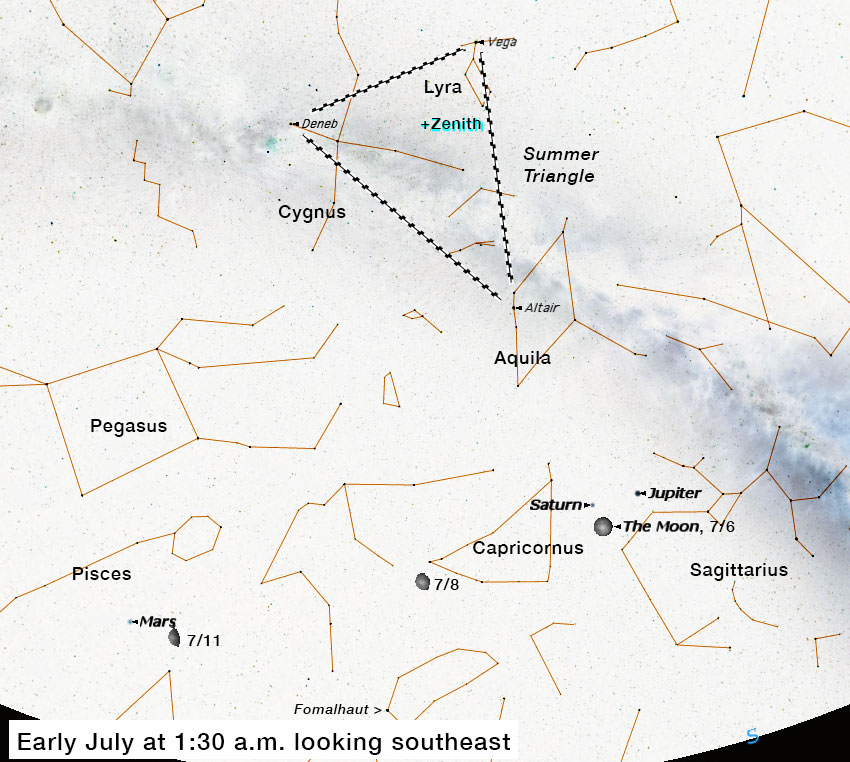