Happy New Year! In tonight’s sky, Venus is the brilliant evening star you see in the western sky. It will set almost three hours after sunset, so we will have plenty of time to enjoy its brilliance. The moon will be already up in the southeast as a waxing gibbous at sunset and get highest up in the south by around 8 p.m. as shown in the attached star chart. The moon will be at the western end of Taurus and pass by the Pleiades at Taurus’ shoulder tomorrow night and then be above the orange-red eye of Taurus, Aldebaran, on January 7. At 8 p.m. Orion will be up high in southeast and all of the stars of Canis Major will be up by that time.

The orange-red supergiant star at the top left corner of Orion, Betelgeuse, has been in the news recently because of its significant change in brightness, leading some to speculate that it was going to die in a spectacular supernova explosion. Delving a bit further into the news stories will show that there are other more likely reasons for the dimming and warnings that we really don’t know for sure what a supergiant star looks like just before it goes supernova because we’ve never been able to track the details of a star before it blew up. We have tried to find out by looking at archive observations of stars that later went supernova but all of those were either very far away or were not systematically observed over long times to see how they changed or, most frequently, both of those options.

Although Betelgeuse’s change in brightness has been unusually great, it is not unprecedented and it could very well be due convection dredging up material from deep in its interior or it could be due to a large mass ejection of dust-filled gas that was directed our way. I would be happy to be wrong and that Betelgeuse is actually going to blow up this year but I think the only fireworks we’re going to see will be the July Fourth ones and the election year politics.

The Betelgeuse supernova would be about as bright as the full moon, so it would be visible in broad daylight. At about 700 light years away, the supernova is too far away to cause any damage to Earth or life on our planet. Go out and take a look to see if Betelgeuse is still there!

In tomorrow morning’s pre-dawn sky, Mars will rise at the head of Scorpius at about 4:30 a.m. This is the year for Mars exploration as three spacecraft are expected to launch in July: the European Space Agency ExoMars 2020 rover and lander, the United Arab Emirates Mars orbiter "Hope", and the NASA Mars 2020 rover. In August the OSIRIS-REx spacecraft orbiting the near-Earth asteroid, Bennu, will briefly touch down on the surface to collect a sample of material and then lift off again. Bennu has turned out to covered everywhere with a lot of large boulders and also ejecting bits of material. These unexpected conditions set back the sample collection timetable by several months as we tried to find a spot to set down. The spot in “Nightingale crater” was finally selected just a few weeks ago in mid-December. OSIRIS-REx will return its sample in September 2023.

In December, Japan’s sample-return mission, Hayabusa2, will return with its sample from the asteroid Ryugu. Sometime near the end of the year, China will launch Chang’e 5 to bring a sample back from the moon.

Here are some other major astronomy events in 2020.  Jupiter and Saturn will have a “great conjunction” (being very close together on the sky) in the early morning of December 21. The two big planets have a conjunction about every 20 years but this one will be the closest they have been since 1623. A few days before, on December 16, a waxing crescent moon will be right below the pair making a beautiful sight. They are going to be low in the west just after sunset.

Two days before, on December 14, the new moon will cover up the sun to produce a total solar eclipse. You’ll have to travel to Chile or Argentina in South America to see it. Maximum eclipse will be two minutes, ten seconds long. I wonder if I can get done with final exam grading in time. Hmm…

Keep a watch on the William M Thomas Planetarium’s website for the schedule of spring shows: www.bakersfieldcollege.edu/planetarium .

From here on out I will post "white sky" star charts (white sky with black stars) because they are easier to print and easier to see at night under dim light. 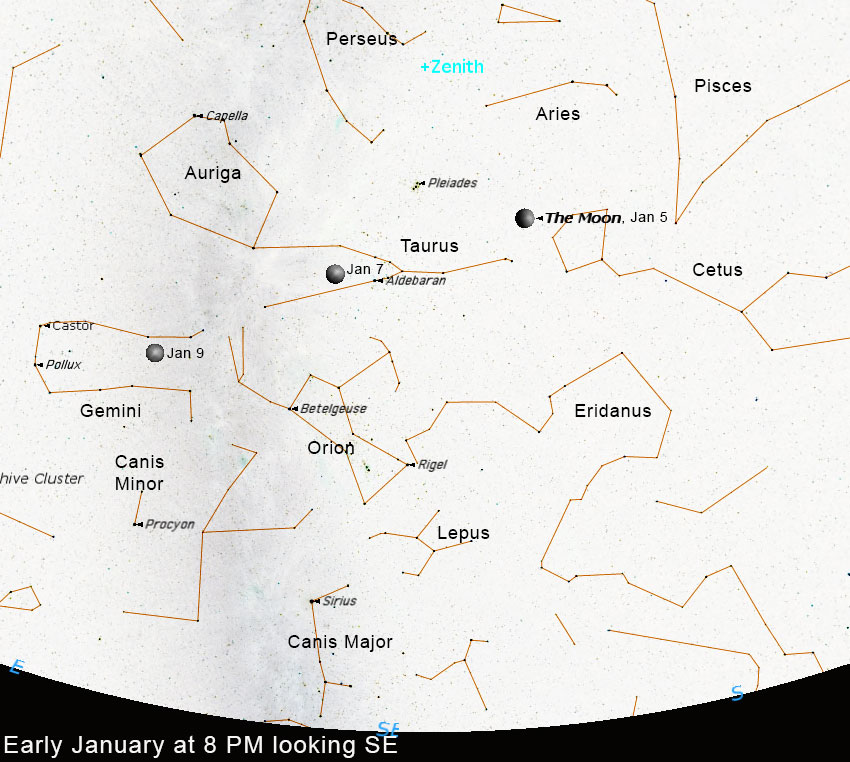