Happy New Year! I pray for a kinder, more compassionate 2021. Yesterday was perihelion day when Earth was closest to the sun. Our planet was just 91,399,454 miles from the sun or three percent closer than at its farthest point, aphelion in early July. Remember that the seasonal changes are due to the changing angle of sunlight hitting our part of the Earth and changing amount of time the sun is above the horizon and both of those changes are due to the tilt of Earth’s rotation axis with respect to its orbit around the sun.

Jupiter and Saturn are now 1.5 degrees apart on the sky and are visible very low in the southwest after sunset. On January 9 and 10 Mercury will join them to make a nice triangle with Jupiter at the top point, Mercury at the lower left point and Saturn at the lower right point. You’ll probably need to use binoculars to see them through the glow of twilight.

After Jupiter and Saturn set, the evening sky will just have Mars. Mars is still quite bright, shining a brilliant orange-red color high in the south after sunset. It’ll be on the left side of the dim constellation, Pisces. Above and to the right of Mars will be the Great Square of Pegasus. The waning gibbous moon won’t rise until about 10:30 p.m. After that you’ll need to wait until about 6 a.m. to see another solar system object rise in the east—Venus. Venus will be the very bright “morning star”.

Here’s a brief run down of what’s happening this year. February will be the month of Mars exploration with the UAE’s Hope going into orbit on February 9, NASA’s Perseverance rover landing on February 18, and China’s Tianwen 1 reaching Mars right about then as well. Tianwen 1 will look for a landing spot for its rover and lander and send them down in April.

March 20 is our spring equinox. This year’s “supermoons” (full moon happening within 24 hours of being closest to Earth perigee) are on April 26 and May 26. The May 26 supermoon will also be a brief total lunar eclipse. The moon will skirt the northern edge of Earth’s umbra being totally inside for just 15 minutes shortly after 4 a.m.

June 20 is our summer solstice and three days later Mars will in the very middle of the Beehive Cluster which should be a pretty sight in a low-power telescope or binoculars.

July 5 is aphelion day. Later in July, on July 22, the DART (Double Asteroid Redirection Test) mission launches for the binary NEO Didymos and Dimorphos. These near-Earth asteroids are 780 meters and 163 meters in diameter, respectively. DART will reach the binary system in late September 2022 and set itself up for an impact within a couple of weeks while the Italian-built LICIA Cube CubeSat watches from a safe distance. The primary objective of DART is to assess kinetic impact as a method for redirection of any future asteroids found to be on a trajectory to impact Earth.

The night of August 11/12 will be the peak of the Perseid meteor shower and the waxing crescent moon will set long before the top of the peak in the early pre-dawn hours. September 22 is our fall equinox.

The long, long-awaited launch of the James Webb Space Telescope (JWST) will happen on October 31. JWST will be the largest and most complex space observatory ever put into space. Observing in the infrared with a 6.5-meter Beryllium coated segmented mirror, it will be able to study the formation of the first galaxies as well as peer inside the dust cocoons around forming stars and planetary systems. JWST was originally scheduled to launch in 2013 but various technical difficulties and COVID-19 pushed the launch date. JWST will be orbiting  about a million miles from Earth, so everything has to work correctly the first time—no opportunities for servicing missions like we did with the Hubble Space Telescope.

On November 19 will be a partial lunar eclipse. The December 5 evening sky will display a glorious fifty-degree line of Jupiter, Saturn, Venus, and the moon in the western twilight and the moon will visit each of the planets over the following three nights. Near the end of December we will also be able to see Mercury with them. December 21 is our winter solstice.

Sometime in the last half of 2021 will be the first crewed mission of Boeing’s Starliner capsule. Boeing’s Starliner will give the U.S. a second option for sending people to the International Space Station; SpaceX’s Dragon being the other transport. 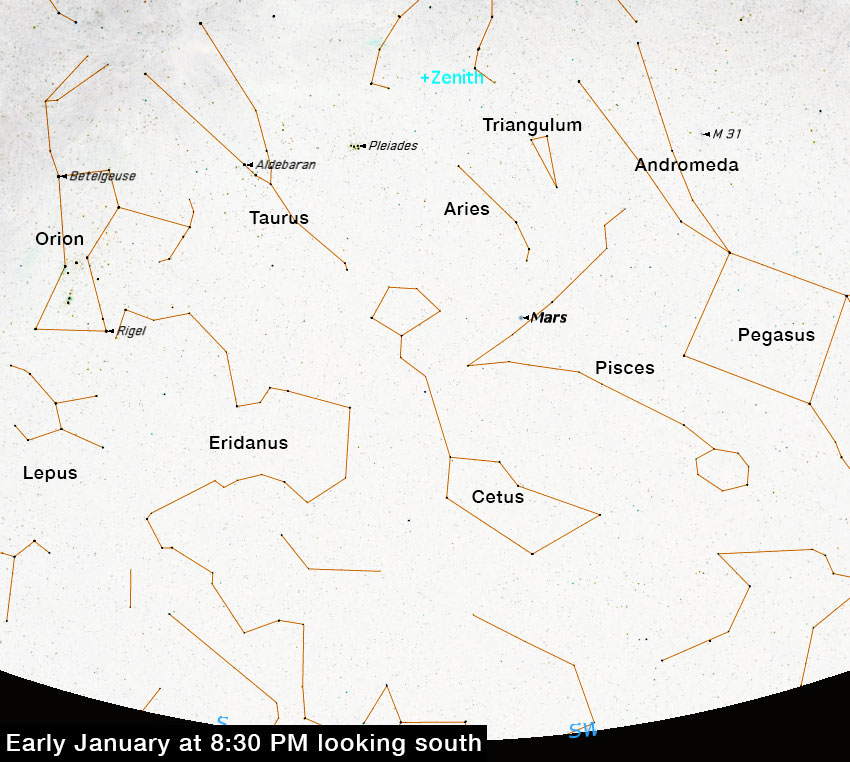