Tonight is a total lunar eclipse! The lunar eclipse officially begins around 6:36 p.m. when the moon enters Earth’s penumbra (partial shadow). Although the moon will be less bright during that time, you probably won’t notice it because your eyes will have enough time to adjust to the slight dimming. Only a light meter would tell you that something is happening. However, when the moon enters Earth’s umbra (darkest, total shadow) at 7:34 p.m., that will be quite noticeable.

Look east (see star chart below). At 7:34 p.m., the moon will be about 30 degrees above a flat horizon (about 3 fist widths held at arm’s length) as seen from Bakersfield. You’ll see Earth’s dark shadow move across the moon from left to right over the next hour. Total eclipse begins at 8:41 p.m. when the moon is almost exactly halfway up to being straight overhead in the east. Totality lasts until 9:43 p.m. when the moon is about 54 degrees above a flat horizon in the southeast. The moon will slide out of Earth’s umbra for the next hour (until 10:51 p.m.). After that it’ll be in the penumbra for the following hour, until almost midnight but as before, you probably won’t notice the penumbra part.

During totality, the moon will have a much redder color because only the red and orange colors of sunlight make it through Earth’s atmosphere as they refract or bend around Earth. If Earth had no atmosphere, then the moon would be truly black when in Earth’s umbra. Earth’s atmosphere enables some sunlight to bend around Earth much like a glass lens can bend and focus light. The bluer colors get scattered about more than the redder colors which is why our sky is blue. How dark the moon will appear (and what shade of orange or red or brown it is) will depend on how much dust and pollution is in Earth’s atmosphere worldwide, so the color and brightness of the moon during totality gives us a measure of global air quality.

This lunar eclipse’s totality will be about just an hour long for a couple of reasons. The first is that the moon is going through the left half of Earth’s circular umbra and not through the middle. The second reason is this full phase of the moon will also be a “supermoon” which happens when the full moon occurs within 24 hours of being at perigee (closest distance to us in its elliptical orbit around Earth). This month, the moon reaches perigee at about noon on Monday or about 14.5 hours after mid-eclipse. The moon appears slightly bigger when at perigee, so it fills up more of the umbra than if the eclipse happened at some other part of its orbit around Earth. There is also the much smaller effect that Earth is closest to the sun during the month of January (perihelion was on January 2 this year), so the umbra is slightly smaller but Earth’s orbit around the sun is much more circular than the moon’s orbit around Earth.

The next total lunar eclipse visible in Kern County will be on May 21, 2021 but totality for that starts at 2:45 a.m. and ends at 4:25 a.m. Tonight’s total lunar eclipse is much better placed! For more about future lunar and solar eclipses, go to eclipsewise.com created by “Mr Eclipse”, Fred Espenak. He created a thousand year canon of eclipses from 1501 to 2500, so enjoy reading about all those eclipses in the past and still to come.

On Tuesday morning, January 22, early risers will be able to see the two brightest planets, Jupiter and Venus, close together in the eastern sky before sunrise. They will be about two thumb widths at arm’s length apart from each other. At the end of the month on January 30, a waning crescent moon will be right next to the pair and the following morning, an even thinner crescent moon will be right between the two planets, making a very beautiful picture.

We continue to download data from New Horizon’s flyby of Ultima Thule. The first images show that this Kuiper Belt object is a contact binary—two round ice-rock bodies stuck together to create something that looks like a snowman (though without the stick arms, carrot nose, and top hat). Ultima Thule is just 19 miles along its long dimension, the larger round part is 12 miles across, and the smaller ball is just 9 miles across. The two balls formed separately and then later bumped into each at a slow speed and stuck together. Cosmic rays hitting the surface material over billions of years have turned it distinctly red in color. We’ll be downloading the trickle of data for the next twenty months, so the best images are yet to come.

One last note: the spring season of shows at the William M Thomas Planetarium at Bakersfield College begin on February 21. See www.bakersfieldcollege.edu/planetarium for the schedule of shows. 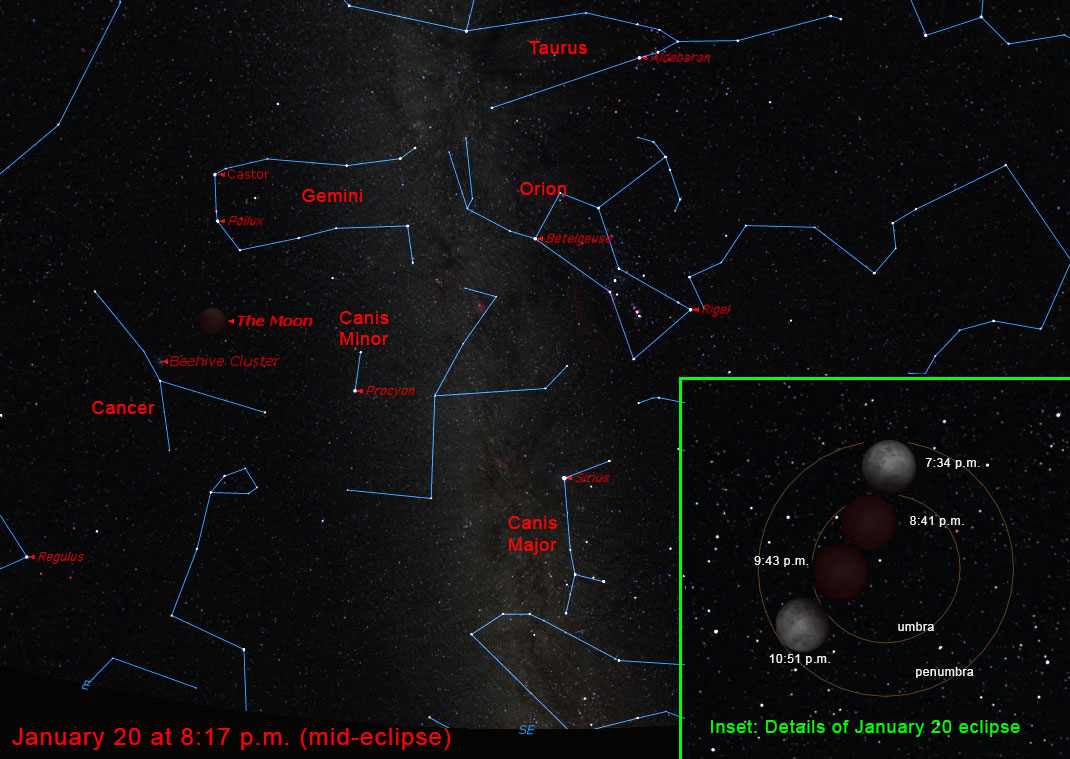