Well, I’ve enjoyed the recent brush of fame with my two or three degrees of separation from a famous person in my extended family. The high school student, Wolf Cukier, who discovered the first “Tatooine” planet, TOI 1338b, in the TESS data is my wife’s nephew. When we last saw him, he was in grade school. Now he’s all grown up, discovering exoplanets, and making the rounds on the TV talk shows.

By a Tatooine planet, I mean a circumbinary exoplanet or a planet orbiting two stars like the home planet of Luke Skywalker in Star Wars. TOI (“TESS Object of Interest”) 1338b is not the first circumbinary exoplanet found. The honor of that goes to Kepler 16b discovered with the Kepler Space Telescope back in September 2011. The Kepler 16 system is 200 light years away. The exoplanet Kepler 16b is a cold world the size of Saturn and orbits the two stars well outside their habitable zone.

TOI 1338b is farther away at 1300 light years distance and it is about 6.9 times the diameter of Earth, or between Neptune and Saturn in size. Planets that size are unlikely to be rocky worlds. The two stars orbit each other every 15 days and one star is about ten percent more massive than the sun while the other is about a third of the sun’s mass, so one star would look similar to the sun and the other would look smaller and distinctly more orange than the sun. TOI 1338b orbits the two stars in just 94.5 days—well inside the habitable zone for the circumbinary stars, so it is likely much too hot for liquid water to exist on the surface. No Luke Skywalker character possible there. The Kepler mission discovered twelve circumbinary exoplanets in ten systems. I’m sure that TESS will find several more before it runs out of fuel.

In other exoplanet news, TESS discovered its first Earth-size world in a star’s habitable zone. The small red-dwarf star TOI 700, 100 light years away, has three planets orbiting it. The innermost one is almost exactly the same size as Earth and takes just ten days to orbit its star. The next one out is a mini-Neptune, about 2.6 times larger than Earth, that orbits every 16 days. The interesting one, TOI 700d, is twenty percent larger than Earth and orbits every 37 days. Although TOI 700d orbits much closer to its star than Earth orbits the sun, the small red-dwarf star has just about two percent the luminosity of the sun, so the planet in its close orbit receives only about 86% of the energy the Earth gets from the sun.

Another plus for the planet is that the red-dwarf star seems to be less active—producing less nasty flares and X-ray bursts—than the usual red-dwarf star, so TOI 700d would more likely have been able to hang on to its atmosphere instead of having it blasted away by the radiation from the star. Most red-dwarf stars are like Proxima Centauri (the closest star to the solar system) and TRAPPIST-1 (the nearby star with seven planets orbiting it, including three in its habitable zone). Although they are smaller and cooler than the sun, red-dwarf stars are usually much more magnetically active and produce several hundred to over 1600 times (in the case of TRAPPIST-1) the X-rays flux and several tens of times more UV radiation than the sun. The UV would break apart water molecules and the X-rays would ionize the atoms in the atmosphere. Then the stellar wind would pick up those ions and drag them away if the planet does not have a strong enough magnetic field to deflect the stellar wind.

Therefore, although the red-dwarf stars make up about 73% of the population of stars in our galaxy, are stable for several tens of billions of years, and at least fifty percent of them have an Earth-size planet orbiting in their habitable zone, the red-dwarf stars may not be the best place to look for a world with complex life on it. Stars like the sun don’t produce as much X-rays and UV but they make up just 6% of the population of stars and are stable for just 8 billion years or less. Perhaps the nice middle-ground stars between the red-dwarfs and the yellow stars like the sun are the orange, so-called “K” stars which make up about 13% of the population of stars. They produce just a few tens of times the amount of X-rays and a few times the UV than the sun does and are stable for over 20 billion years. The current exoplanet count (at the time I wrote this) is 4,104 in 3,047 systems and there are 4,900 candidates to still sift through.

In tomorrow morning’s sky, look for a thin waning crescent moon forming a triangle with Mars and Antares, the red supergiant star at the heart of Scorpius in the southeast. Mars will be about 800 times farther away than the moon and Antares is about 17 million times farther away from us than Mars. Also, check out the spring schedule of Planetarium shows! 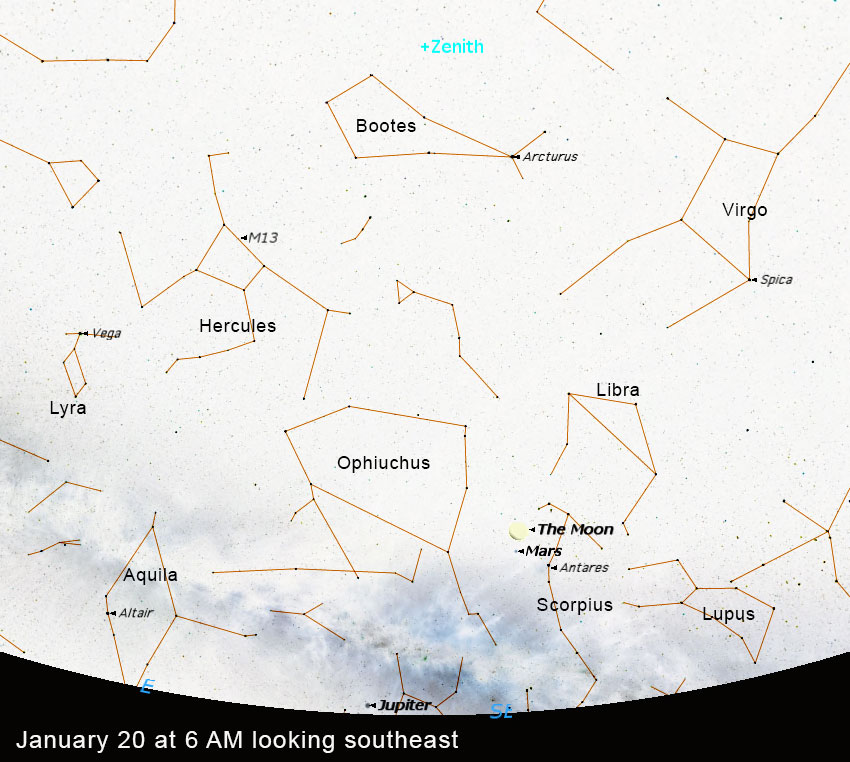