On Tuesday, February 9, the first of a fleet of terrestrial spacecraft will arrive at Mars. The United Arab Emirates’ Hope (Al-Amal) orbiter will go into orbit around Mars after its seven-month journey to the red planet. Hope will focus on studying Mars’ global weather patterns from a significantly higher orbit than other orbiters have used. Its elliptical orbit will carry it between 14,000 and 27,000 miles from Mars. Hope’s three science objectives are: 1) understand climate dynamics and the global weather map through characterizing the lower atmosphere of Mars (closer orbiters study small sections of the atmosphere at a time); 2) explain how the weather changes the escape of Hydrogen and Oxygen through correlating the lower atmosphere conditions with the upper atmosphere; and 3) understand the structure and variability of Hydrogen and Oxygen in the upper atmosphere, as well as, identify why Mars is losing them to space. In addition to making scientific contributions to our understanding of Mars, the Hope orbiter is part of the UAE effort to shift its economy from an oil-based one to a technology-based one. Go to www.emiratesmarsmission.ae to track its progress.

The following day, February 10, will see the arrival of China’s Tianwen-1. This is an orbiter-lander-rover combination. Tianwen-1 will wait until May to send the lander-rover down to Utopia Planitia, a large flat region in the northern hemisphere that may have been part of a large northern ocean of water billions of years ago. According to the press release from the China National Space Administration after the launch of Tianwen-1, the mission will study Mars’ “morphology and geological structure, soil characteristics and distribution of surface water ice, surface material composition, atmospheric ionosphere and surface climate and environment, as well as physical field and internal structure of Mars.”

Next week Thursday, February 18, will see the landing of the largest, most sophisticated rover sent to Mars, Perseverance, at Jezero Crater, an impact crater on the western edge of Isidis Planitia just north of Mars’ equator. Isidis Planitia has some of the oldest and most scientifically interesting areas to explore and Jezero Crater itself held a lake up to 820 feet deep and now has the remnants of an ancient river delta in which ancient organic molecules and possibly the remains of microbial life are preserved. If ancient life ever existed on Mars, the clays and carbonates in the river delta would be the best possible place to preserve the biosignatures from a time 3.6 billion or more years ago. The river delta also contains a variety of minerals from inside and outside the crater that would have drained the large watershed into the river delta that ran into the lake.

A lot of the geological features that make the river delta so interesting also make it a hazardous place to land. Perseverance will use the same sky crane technology used on the Curiosity rover in 2012 but Perseverance will also have the Terrain Relative Navigation (TRN) system that will take pictures of the terrain below it, compare the pictures to pictures taken from orbit, and divert the sky crane if necessary to a safer spot. The TRN will enable Perseverance to land safely much closer to the really interesting spots than what Curiosity could do and therefore shave off a few months or more driving time to get to those spots.

Curiosity explored the past habitability of Mars, i.e., the environment. Perseverance will have the instrumentation to look for life, past or present, in that environment. The rover will also have a drill to collect core samples of specially-chosen rocks and soils and set them aside in a cache for later return to Earth via a future mission. Once brought back to Earth we can analyze the rocks and soil using laboratory equipment much too large to take to Mars.

Even though martian life might use different biological reactions than terrestrial life, a martian biosignature will still have to be something that enhances certain isotopes and molecule types beyond what ordinary geological and chemical processes will do. Biosignatures have to possess three characteristics: 1) they are compounds that are essential and unique to cellular processes; 2) they need to be stable for a LONG time (billions of years); and 3) the molecules need to be reasonably abundant enough for us to detect them.

We're going to have a Perseverance landing Zoom watch party on February 18 through Bakersfield College as we watch the NASA TV broadcast with a little commentary by me. It will start at 11 a.m. and go to 1 p.m. (maybe a little longer). Sign up for the Perseverance landing watch party! In the meantime, you can get prepared for the Mars landing by going to the Mars section of Astronomy Notes.

While we wait for February 18, you can see Mars high up in the southwest sky in between Aries and Taurus in the early evening after sunset (see the attached star chart). It is still quite bright: brighter than Aldebaran at the eye of Taurus but slightly dimmer than Rigel at Orion’s knee. Mars will set at about 12:30 a.m. 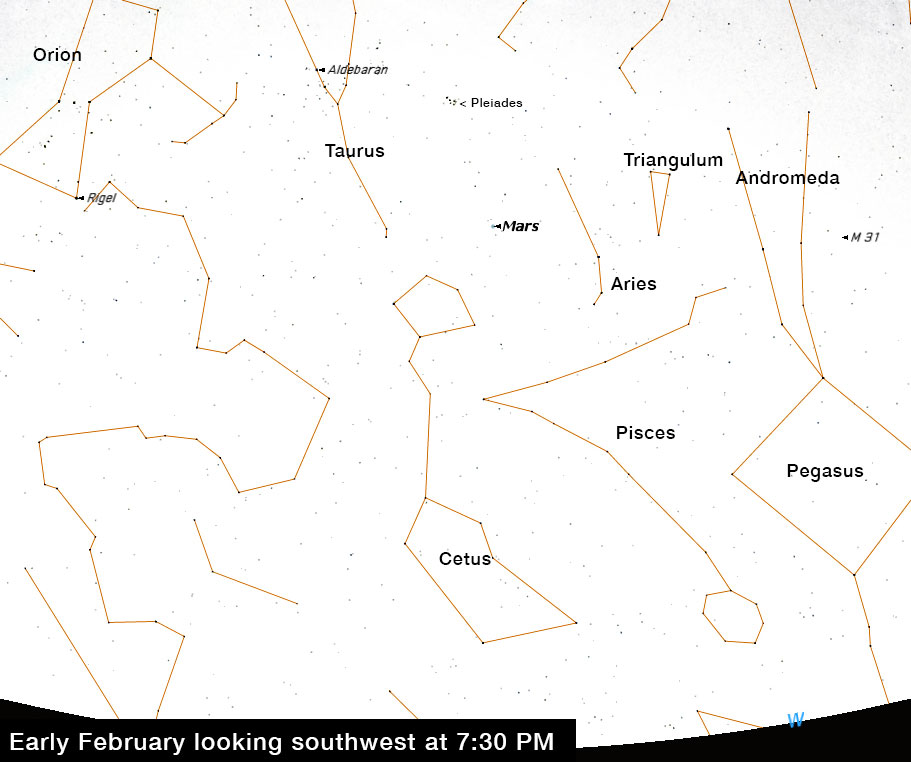