Tickets are on sale for the first show of the spring season at the William M Thomas Planetarium, “From Earth to the Universe”. On February 21, audiences will be given a beautiful introduction to all the various objects in the universe and some history of our discovery of where we are in the grand scheme of the cosmos. The schedule of the rest of the shows is posted on the Planetarium’s homepage.

A recent interesting astronomy news story is the finding that the rate of asteroid impacts on the moon and Earth increased by a factor of 2.6 times about 290 million years ago. We don’t know why the rate picked up but it may have to do with the collision of two or more larger asteroids in the asteroid belt that sent chunks into orbits that would eventually get close enough to Earth to be drawn in by Earth’s gravity. Two things about the research story that are particularly fascinating is how the research team measured the ages of the lunar craters and that the work on the lunar craters led to the discovery of the cratering history on Earth.

The new way of measuring crater ages was discovered by Rebecca Ghent in 2014 with her observations of the moon’s surface using NASA’s Lunar Reconnaissance Orbiter (LRO). She began with the realization that newer, younger craters are going to have more large rocks in them than older craters because the constant stream of micrometeorite impacts will grind down larger rocks over long periods of time. Larger rocks take more time to cool off during the night than the fine-grained regolith of the lunar soil. Therefore, younger craters will take longer to cool off at night than older craters.

One of the instruments on board LRO is the Diviner thermal radiometer that measures the temperature of the surface by measuring the infrared energy radiating from right below the spacecraft. LRO is now orbiting in an elliptical polar path around the moon that varies between 12 miles above the south pole and 103 miles over the north pole. Diviner was built by two institutions just south of us, UCLA and the Jet Propulsion Laboratory. It has acquired nearly a trillion measurements since it began operating in July 2009. Back to crater ages: Ghent was able to establish a relationship between the rock abundance in the craters and the age of the crater. Furthermore, the rock abundance can be easily measured with the Diviner thermal radiometer instead of having to count every rock. Very clever!

Ghent’s Ph.D. student, Sara Mazrouei, used the new crater age-dating method to measure the ages of over a hundred craters that were younger than a billion years old which is the limit of Ghent’s technique. Mazrouei narrowed her search to craters more than 6 miles in diameter to make sure there were enough rocks in the craters for Diviner to measure accurate enough temperature differences. With over one hundred craters that have ages spanning up to a billion years, she found a rather sharp increase of a factor of 2.6 beginning 290 million years ago.

Then Mazrouei’s group turned their attention to Earth impact craters and worked with geologist Thomas Gernon to locate impact craters in particularly stable locations on Earth with minimal erosion. Now, we have known for at least a few decades that Earth has fewer older craters than expected when compared to other places in the solar system but we had attributed the lack of very old craters to erosion from wind, rain, and other geologic processes. The sites located by Gernon have been geologically stable and had very little erosion for the past 650 million years. Knowing what to look for from the lunar cratering data, Mazrouei’s group discovered the same sharp increase on Earth. So the reason for Earth’s lack of very old craters on stable surfaces is not erosion but, rather, the impact rate was actually lower before 290 million years ago. Future work is needed to see if the increased rate is just a spike or has persisted today. Future work will also see how the varying impact rates have affected the history of life on Earth.

In tonight’s sky you’ll see the brilliant stars of Orion high in the south at about 8:30 p.m. with bright stars of the Winter Hexagon surrounding it (see the star chart below): starting with Capella in Auriga at the highest point of the hexagon and going clockwise to Aldebaran at the eye of Taurus, Rigel at the knee of Orion, Sirius at the neck or nose of Canis Major (lowest point of the hexagon), Procyon at the hindquarters of Canis Minor, and finally, Pollux or Castor at the heads of Gemini.

Mars is the only planet in the evening sky. It will be the bright orange-red “star” among the dim stars of Pisces, to the left of the Great Square of Pegasus in the west. The moon will be at new moon phase tomorrow and first quarter phase on Tuesday next week, February 12. That means Thursday to Saturday of this week may be some beautiful views of the thin waxing crescent moon in the west just after sunset, weather permitting. 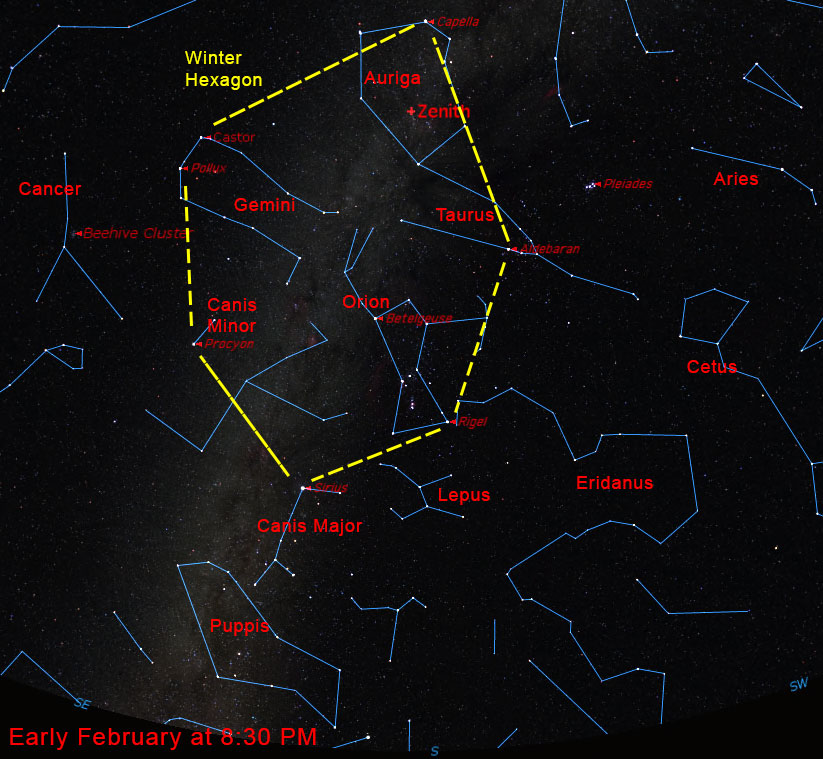