As I write this, the Perseverance rover landing on Mars is still three days in the future. I’m assuming that Perseverance has landed successfully by the time you read this in the Californian but this is not a safe assumption. Mars has not been kind to half of the lander/rover missions and forty percent of the flybys/orbiter missions. Success at Mars is by no means assured!

The last time NASA sent astrobiology experiments to Mars was with the Viking missions in 1976. Perseverance will be the first NASA rover/lander with instruments capable of detecting the presence of life on Mars since NASA returned to Mars in 1997 with the Pathfinder mission. Why did it take NASA 45 years before taking another crack at detecting life on Mars?

Planning for the Viking missions began as far back as 1964 and development began in 1969 with the scientific instrumentation set by 1971 or 1972. The United States had landed people successfully on the moon and we had confidence that if we could get Congress to approve the missions, we’d be able to settle the question of life on Mars with one mission. Mars showed us that our preconceived 1960s-era ideas of astrobiology were seriously naive.

Viking had four experiments to detect signs of life. Two of them initially seemed to show signs of biological activity but further testing showed it was some other chemical process. A third experiment seemed to show some type of metabolic activity by microbes but the fourth experiment said that there were no organic materials in the soil Viking was sampling. In fact, the soil was so chemically reactive that any microbes would be dissolved. Mars was clearly a different world than Earth and we needed to re-think our approach to looking for life past or present on Mars.

NASA decided upon a more careful, methodical approach and returned to Mars two decades after the Viking missions. The Pathfinder lander/rover was a technology pathfinder mission designed to test technologies that would be used in future, larger missions, including the now classic six-wheeled chassis system used on all of the rovers. Pathfinder had a lander and a small rover that was controlled by the lander (which received instructions from Earth).

The Mars Exploration Rovers of 2004, Spirit and Opportunity, were designed to prove whether or not liquid water had ever been on Mars. The orbiter missions beamed back plenty of pictures that seemed to show features carved by flowing liquid water but Spirit and Opportunity’s chemical analysis of the rocks conclusively proved it. In 2008 the Phoenix lander that landed in the far north found that the martian soil had perchlorate salts that would have destroyed any organic material that was processed in the Viking lander experiments. That explained why the Viking landers found no organic material in the soil. The Curiosity rover landed in 2012 and within a few months found that Mars’ ancient environment was hospitable to life—neutral pH water and organic materials were present and the minerals present could have been used by ancient life as a chemical battery. Furthermore, the rocks were made of material that could preserve biosignatures of ancient life.

So, we know for sure that Mars had a habitable environment in the past, all the ingredients are there. We also now have a few decades experience with extremophile life (life that thrives under really extreme conditions) after the discovery of extremophile microbes in the 1980s as well as better analytical tools for detecting past ancient life from billions of years ago.

We’re now ready to look for life on Mars, past or present and Perseverance has many of the tools to do that. With what Perseverance can’t do itself, it has the capability of packaging core samples for a later mission to return them to Earth where much larger, state-of-the-art instruments can be brought to bear. Remember that any instruments on Perseverance were developed at least several years ago and were miniaturized to fit in a rover about the size of small SUV. A constellation of biosignatures need to be found to make a case for ancient life: organic compounds, enhanced ratios of hydrocarbons, chemical changes from metabolism, microfossils, molds, or casts in the rocks from microbes, and possibly macro structures such as stromatolites and microbial mats. For more about Mars see the Mars section in my Astronomy Notes website and for more details about Perseverance, see the mission website at https://mars.nasa.gov/mars2020 .

Later this week on Wednesday, February 24, you will see a bright waxing gibbous moon next to the Beehive Cluster at the heart of Cancer. The separation distance between them will be about two thumb widths at arm’s length. The moon will be full phase the night of February 26/27. Mars is still a bright orange-red point in the southwest sky in the evening, closing in on its close encounter with the Pleiades in the first part of March. In the morning before sunrise on February 25, look low in the east-southeast to see a triangle of planets: Jupiter (the brightest point), Mercury (the top of the triangle), and Saturn. 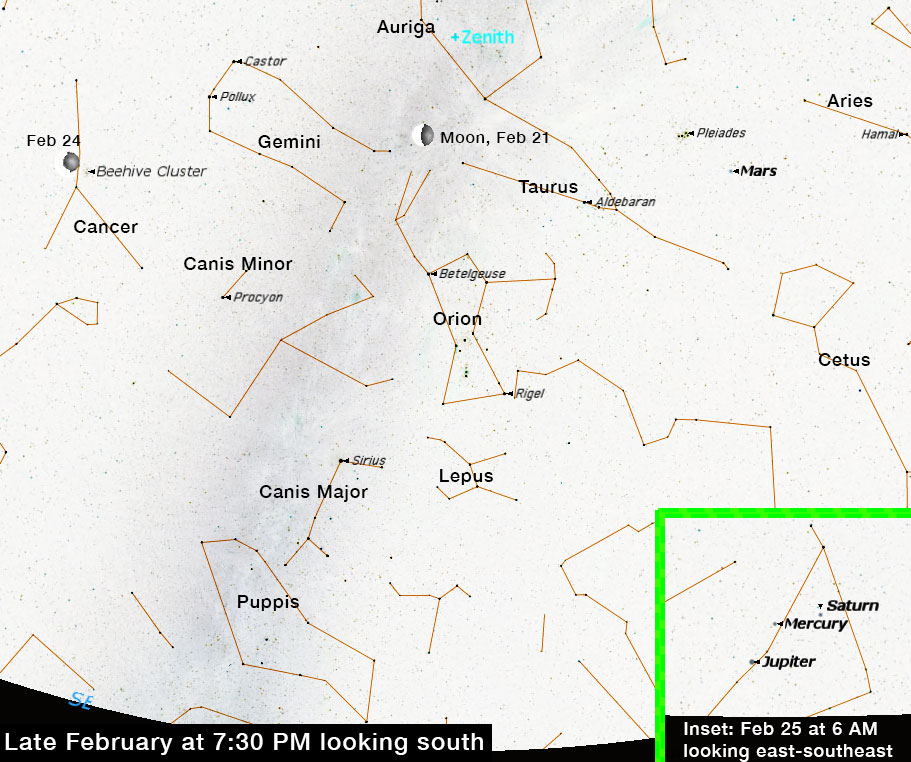