In my September 20 column I wrote about the surprising discovery of large quantities of phosphine in Venus’ atmosphere which could be produced by microbial life living in the clouds. At the end of the column I noted the peer review process of science was going to work finding alternate reasons for the strong phosphine signal. One of the co-authors of the study (Clara Sousa-Silva) noted, “My science tells me the detection is true, but it's pretty wild. I hope that everyone will get their models running and try and find alternatives that explain this. I have reached the limits of my knowledge and welcome the rest of the scientific community to join in the fun.”

Well, one thing scientists learn by doing science is humility because sometimes a major discovery turns out to be wrong. The physical universe doesn’t care about our beliefs or how we wish things would behave. Scientists can misinterpret what the data mean or there is something wrong with the instrumentation that measured the signal or some other process or phenomenon was overlooked in the analysis. For a discovery as extraordinary as life on another planet, extraordinary evidence is required and there will be an extraordinary amount of peer review work to try to find an alternate, less extraordinary (prosaic) explanation of the data. More often than not, the physical universe ultimately says the boring prosaic explanation is the correct explanation, so when you publish an extraordinary scientific claim, you have to be willing to admit when you’re wrong.

Now it’s looking like, after a lot of scrutiny by other research teams and a re-analysis of the original data by the team who announced the discovery, that the phosphine (and possible life) detection is not so firm. It turns out there was a calibration error with the radio observatory used to study Venus, the huge Atacama Large Millimeter/submillimeter Array (ALMA), an array 10 miles across consisting of 66 radio telescopes installed at a high elevation of over 16,500 feet elevation in the Atacama Desert in Chile. ALMA is normally used to study very small, very faint, very distant objects, so observing really bright, big, nearby Venus presented some unique challenges with really noisy data. The original discovery team, led by Jane Greaves, had to push the limits of ALMA to pick out the phosphine signal in the noisy data and now, with the corrected calibration, the phosphine signal has been lowered by a factor of seven.

Greaves’ team’s transparency with their work, putting it all out there for the world to critique has been good for science but Greaves admits the careful scrutiny by her colleagues has also been a bit bruising: “This process has sometimes been painful, but it’s also been good for getting the data right.” With the experience gained from properly calibrating ALMA for big, bright solar system objects, Greaves will be using ALMA this coming spring to take another longer, more detailed look at Venus, focusing on parts of Venus to see if the phosphine amount varies over Venus’ face. Even if the phosphine signal turns out to be truly there, other research teams are going to be working on possible ways phosphine could be generated via some strange Venus geology. Research continues!

A bit farther out from the sun, Jupiter and Saturn continue to draw closer together on our evening sky. Tonight they are just 1.5 degrees apart, slightly more than the width of your thumb at arm’s length low in the southwest shortly after sunset (see the starchart below). By the time the evening twilight is over, they will slightly more than a hand’s width above the horizon. Hopefully, Bakersfield’s dust-smog layer doesn’t cover them up. On the evening of December 21, they will be just one-tenth of a degree apart and you might have a hard time seeing them as two distinct objects.

Mars is still quite bright but it is no longer as bright as Jupiter. Mars is high in the southeast at sunset among the dim stars of Pisces and it will be highest due south shortly before 8 p.m. The waning gibbous moon doesn’t become visible until 11 p.m. as it rises with Leo. By 5:15 a.m. you should be able to see Venus rising in the east with the stars of Libra. 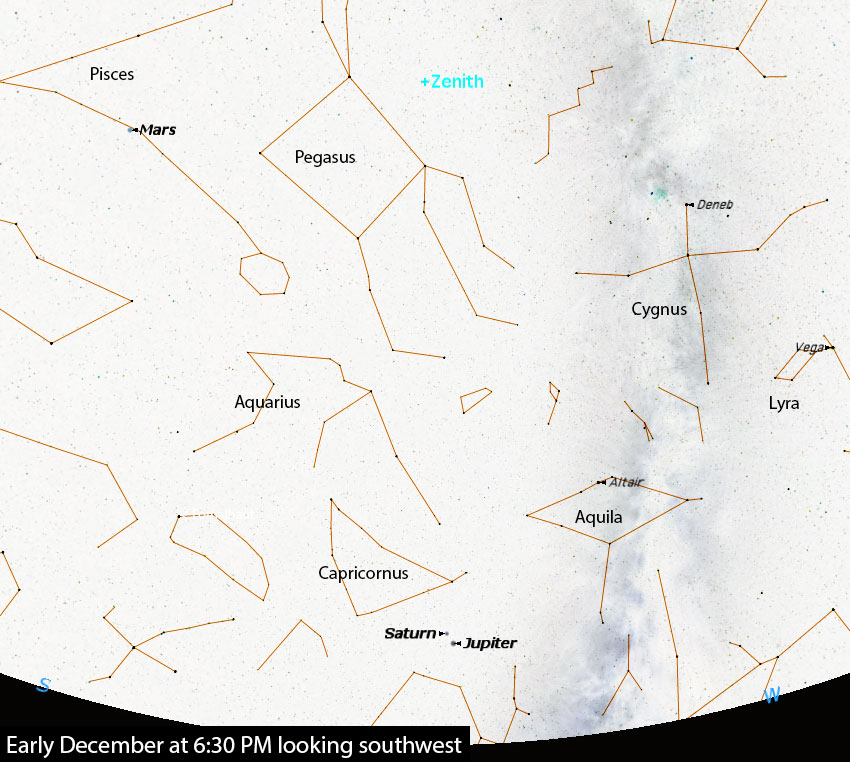