Over the next few nights Jupiter and Saturn are going to appear as almost one bright star low in the southwestern sky shortly after sunset. On the evening of December 21 they will appear the closest together on our sky than they have been since 1623, just 0.1 degrees or one-fifth the angular diameter of the full moon. For old eyes like mine, they’ll merge but sharper eyes should be able to split the two.

They are going to be low in the sky, though, so they’ll be fuzzier than if they were higher up. When astronomical twilight ends at 6:20 p.m. on December 21, Jupiter and Saturn will be just 7.5 degrees above a flat horizon which is about three-quarters of a hand width at arm’s length above the horizon. At the sunset time of 4:47 p.m., they’ll be at altitude almost 22 degrees (two hand widths). The pair set at  7:04 p.m. but that time is for a perfectly flat horizon and does not take into account any dust, smog, or cloud layer that usually blocks our view.

The next great conjunction will be on the morning of Halloween 2040 and the two planets will be about a degree apart (thumb width at arm’s length) like the May 2000 great conjunction. The last time the great conjunction was closer than this year’s was on July 16, 1623 but they were less than 13 degrees separation from the sun and just a few degrees above the horizon at sunset for northern hemisphere observers, so they were probably lost in the evening twilight. Observers farther south would have seen them up only slightly higher. To find an even closer great conjunction, you’d have to go back to early March 1226 when the separation between Jupiter and Saturn was one-third of what we’ll experience tomorrow. The two planets were almost 50 degrees separation from the sun and were easily visible in the pre-dawn hours in the northern hemisphere.

Great conjunctions as close as we’ll see tomorrow are what astronomers call “rare”. That being said, the great conjunction in 2080 will be just as close. I don’t think I’ll see that one. After that we’ll need to wait until 2417 to have another very close one. The number of times that Jupiter lines right up with Saturn to go in front of it goes under the category of “very rare”. We’ll have to wait until 7541 to see Jupiter and Saturn merge into one object as Jupiter covers up Saturn. The previous merger was in 6856 BCE, so “very rare” seems just about right.

Since this great conjunction is occurring so close to Christmas, you may be wondering if something like this could have been what the Magi saw heralding the birth of Jesus as described in the Gospel of Matthew. I have an article about the “Star of Bethlehem” posted on my Astronomy Notes website at astronomynotes.com/history/bethlehem-star.html . There are several astronomical possibilities for the Bethlehem star and a lot depends on when you say Jesus was born and many estimates of that are tied to the year you say King Herod died. In the article I argue for a birth year of Jesus of 6 to 4 B.C.E. which then narrows the range of astronomical possibilities.

December 21 at 2:02 a.m. is also the solstice when the sun is at its farthest south position among the stars. The solstice officially starts our season of winter. Many blessings to you this holiday season and I hope 2021 will be a better year for all of us! 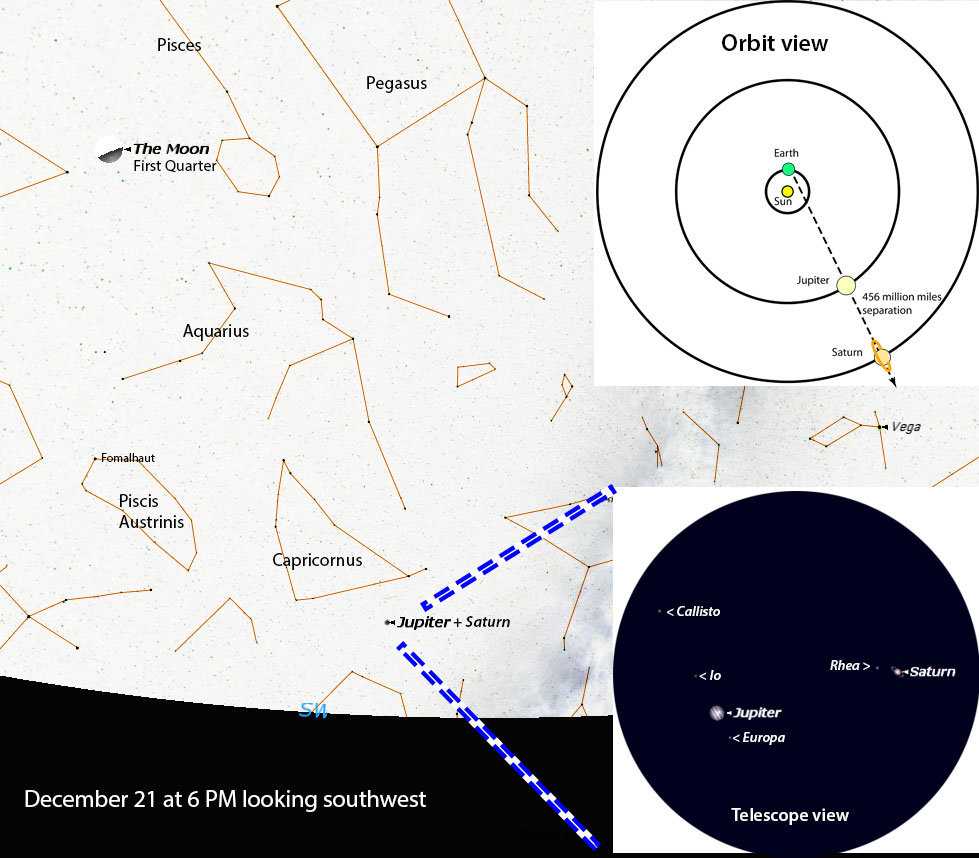