Tonight will be a gorgeous view of three bright planets—Jupiter, Venus, and Saturn—equally spaced low in the southwestern sky shortly after sunset with a thin waxing crescent moon peering down at the trio from the upper left (see the star chart below). Jupiter continues to draw ever closer to the sun and will be lost in the twilight glow by the middle of the month. It goes behind the sun (conjunction) on December 27. Venus will be within just 2 degrees of Saturn (two thumb widths at arm’s length) on December 10 and 11. Saturn will be lost in the twilight glow by the end of the month, leaving Venus to be the lone “evening star” for the start of 2020.

Mars will be visible in the east rising at about 4:45 AM in the space between Virgo and Libra and Mercury will be visible about an hour after that in the middle of Libra (see the star chart below). The moon is a waxing crescent tonight and it will be at full phase on the night of December 11. Two nights later on the night of December 13/14 will be the peak of the Geminid meteor shower but the waning gibbous moon is going to wash out most of them.

The red planet, Mars, will have additional visitors starting in 2021 as NASA’s Mars 2020 rover launches in the middle of summer next year with arrival in mid-February 2021. The European Space Agency (ESA) will be following that with its own ExoMars rover mission launching in late 2020 and arriving nine months later. The Mars 2020 rover will have the capability of detecting past microbial life in the carbonate deposits of Jezero Crater, as well as, caching core samples for later retrieval by a sample-return mission to bring the samples back to Earth for more advanced analysis needing equipment much too large to put on a rover.

Last week NASA and ESA took the first formal steps in committing to the Mars sample return mission. ESA will create the fetch rover to collect the cached samples in 2028 and bring them to a NASA-built lander that will have a return rocket. ESA will create the arm on the lander that will load the samples from the fetch rover into the rocket. NASA will build the return rocket that will shoot the capsule with the samples up into Mars orbit. The Earth return orbiter will snag the sample capsule that will be just the size of a basketball. That Earth return orbiter will be built by ESA and it will use ion propulsion to slowly make its way back to Earth. It will take two years to get back to Earth. The Earth entry vehicle, looking somewhat like a classic flying saucer, will fall back to Earth in 2031 without parachutes and crash into the Utah desert like the Stardust mission did back in 2006.

The Mars sample return will involve a number of firsts: the fetch rover will be able to navigate autonomously; the return rocket will be the first rocket off of another planet; the Earth return orbiter will track the small capsule using just cameras to track and capture it; the Earth entry vehicle will not use parachutes to slow it down before it crashes into the desert; and, of course, this will be the first samples brought back from Mars. Sounds easy, doesn’t it? What could go wrong?

Back here on Earth in Bakersfield, the William M Thomas Planetarium will give two showings of the popular holiday show “Season of Light” on this Wednesday, December 4, and next Wednesday, December 11. This presentation traces the history and development of many of the world's most endearing holiday customs, all of which involve lighting up the winter season — from the burning Yule log, sparkling Christmas tree lights and candles in windows, to the lighting of luminarias in the American Southwest and the traditional ritual of the Hanukkah Menorah. “Season of Light” concludes with some possible astronomical explanations for the “star of Bethlehem” but see my page www.astronomynotes.com/history/bethlehem-star.html for my own research on that. Tickets are on sale now! 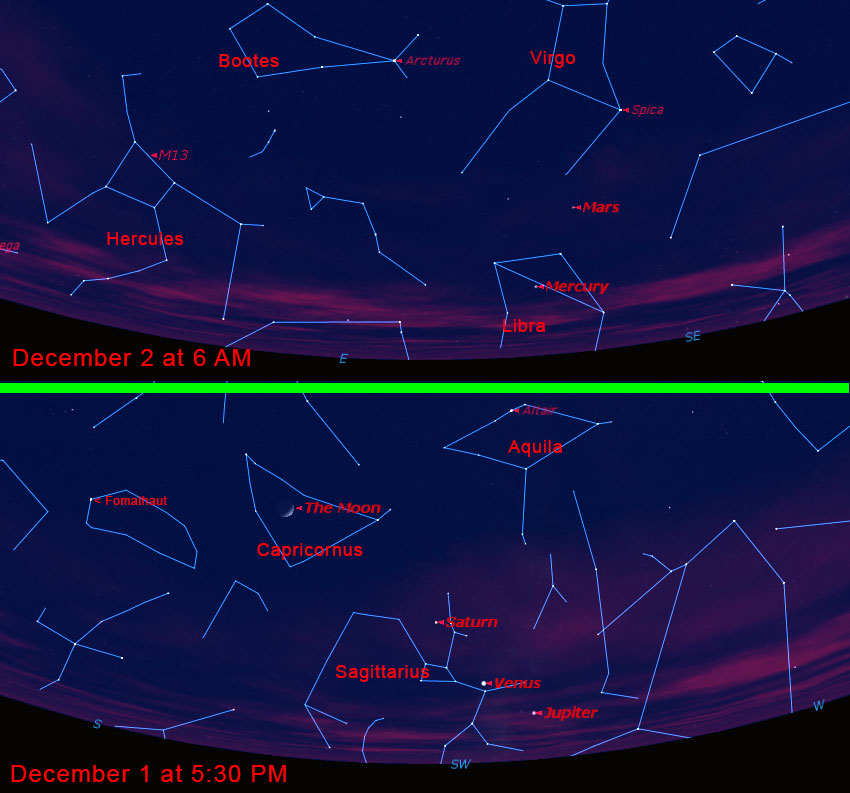