The start of the semester is just around the corner. Bakersfield College is going to be nearly all online for this semester due to COVID19. I had an interesting conversation with a community member about his frustration with all the conflicting science studies about the various ways of re-opening schools and businesses and how the process of science works. Reminds me of the controversies in my subject matter, astronomy.

A lot of the reason for the wide range was the quality of the data and assumptions used in the analysis but those assumptions were dependent on which data set a given astronomy team thought was most relevant or of better quality. One of the Key Projects of the Hubble Space Telescope was to collect the high quality data needed to settle the matter once and for all. That data consisted of measuring the motions and distances of galaxies from above the distorting effects of our atmosphere. After about a decade of work, the result came out to almost smack dab in the middle between the two camps: 72. Further work has put the number at 74. (STEM folks: the units are kilometers per second per megaparsec.)

Then came the measurements of the lumpiness in the microwave background radiation from the time of just 380,000 years after the Big Bang. It is the leftover heat from the time the universe was just a hot gas and it is the oldest form of light we can directly observe. The lumpiness of the hot gas would later become the structure we see around us: galaxies with stars and galaxy clusters. It turns out that analyzing the lumpiness in the microwave background radiation gives us the Hubble Constant. Those measurements give a number of 67 for the Hubble Constant.

Now, we’re back to two camps arguing over the value of the Hubble Constant. Each camp’s measurements of the Hubble Constant comes with a range of uncertainty because physical reality always has some randomness to it and our instruments have only a finite precision. Using standard statistical techniques we can determine that range of uncertainty. The quality of data we use today are now so good that the uncertainty ranges are very small. The techniques and data of the two camps have been checked and re-checked. No mistakes have been found. The gap between the two camps is real and it is due to a gap in our understanding. The discrepancy will be resolved in the typical way of science: cross-checking of the analyses, gathering more data, and creative modifications to our understanding of the underlying physics. Now, I haven’t even mentioned the controversies of what the heck is dark matter and dark energy. At least we know what we don’t know.

Something we do know about well is rocket-powered space travel. Congratulations to NASA and ULA for a successful launch of the Perseverance rover to Mars and to SpaceX for a successful completion to their Crew Dragon test flight demonstration of transporting people to the International Space Station and back! The Crew Dragon spacecraft brought astronauts Robert Behnken and Douglas Hurley safely back to Earth on August 2. The next SpaceX Crew Dragon launch in September will be the first operational flight of the Dragon and it will carry astronauts commander Michael Hopkins, pilot Victor Glover, and mission specialists Shannon Walker and Soichi Noguchi to the ISS.

This past week the OSIRIS-REx spacecraft did a test run of its collection of material from the small near-Earth asteroid Bennu. Bennu turned out to be a lot rougher and active than expected with some of the rubble being ejected into space. That pushed back the sample-return mission by several months as the team hunted for a clearing and figured out how to maneuver the spacecraft through all the obstacles. The first actual sample collection attempt will be in October. OSIRIS-REx will have time for an additional two attempts before it starts its journey back to Earth in March 2021. Besides its scientific importance of having primordial material, Bennu also has a high probability of hitting Earth near the end of the 22nd century.

Jupiter and Saturn continue their reign in our evening southern sky though they are now getting a bit dimmer as Earth pulls away from them. Mars continues to brighten as we catch up to it for our October close approach. Early risers will be able to see Venus after 3:20 a.m. and a very thin waning crescent moon rising at about 5 a.m. The new moon phase is on August 18 which means there will some beautiful thin waxing crescent moon views at the end of the week shortly after sunset. 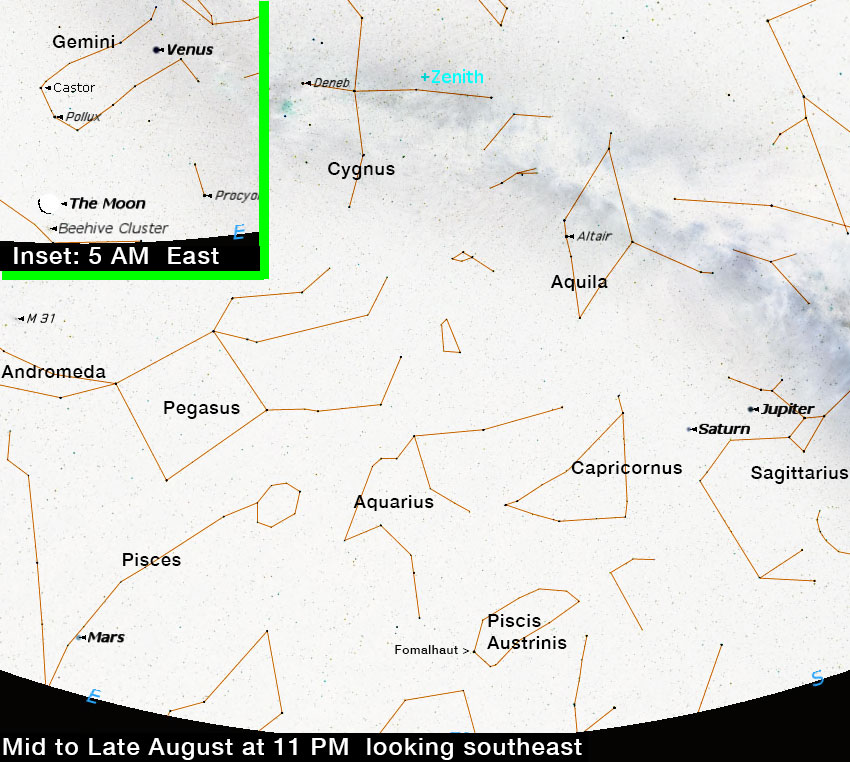