The Mars Perseverance Rover is about to collect and cache its first sample of Mars rock for eventual return to Earth via the Sample Return Mission about a decade in the future. The Mars samples will be analyzed by instruments on Earth that are much too large to be sent to Mars and will be available for future generations of scientists to analyze with instruments and techniques we haven’t even thought of yet.

What I didn’t realize before is how long it takes to actually do sample collection beyond the time spent finding particularly interesting rocks to drill. That time spent finding just the right rock to drill takes a while, of course, because we have just 38 sample capsules for the prime mission and any mission extensions, so we have to be really picky about which samples to collect. Seventeen to 20 samples will be collected in the two-year prime mission and the rest will be collected in the expected mission extensions. There has already been a multi-year process of carefully mapping out from orbit and deciding which locations to search for suitable rocks before Perseverance got to Mars. Suitable rocks are those that interacted with water, have organic molecules, and are of the type that could preserve chemical traces of life over billions of years. Once the intense debate has settled on which particular rock to sample and at which point to drill into the rock, there’s an eleven-day process of doing the drill and cache.

After receiving instructions from Earth millions of miles away, Perseverance will carefully place the suite of instruments and drill at the end of its robotic arm on the rock in a carefully choreographed set of movements. The first few days will be spent analyzing a part of the rock next to the proposed drill site with the instruments at the end of the robotic arm as well as the laser spectrometer and super high-resolution camera on the mast head. They will get valuable data on the rock they’ll sample by analyzing its geologic twin.

After all of that detailed study, the rover will rest a day and then the coring will begin. The robotic percussive drill will penetrate about 5 centimeters, break off the core sample from the rock, transport the sample to the bit carousel which then transfers it to the Adaptive Caching Assembly where it will be measured, photographed, capped and hermetically sealed in a super-sterile tube about the size of your pinky, and then put into a storage rack. Once enough samples have been stored, Perseverance will deposit the group of samples on the martian surface for later retrieval by the sample return mission. Included in each depot cache will be so-called “witness blanks” and “procedural blanks” that will be deployed after possible contamination events to provide calibration reference points.

I continue to be amazed at the painstaking, meticulous care the various mission teams take in developing and testing and re-testing the hardware and software as they try to think of every possible malfunction or environmental contingency.

The Mars InSight lander teams using the seismometer to probe Mars’ interior held a news conference to announce their results published in a series of peer-reviewed papers. The crust is only 12 to 24 miles thick—a surprising result since we expected it to be thicker than Earth’s continental crust that is between 22 and 43 miles thick. The mantle layer, on the other hand, is thicker than expected extending down 250 to 370 miles which is proportionally deeper than Earth’s mantle goes and Mars’ mantle does not have the two sublayers that Earth has. This means that Mars can lose heat from its core more readily. Mars’ core is still liquid and larger than originally thought. Instead of being just iron-nickel like Earth’s core, Mars’ core has relatively more lighter elements such as sulfur, oxygen, and carbon compounds mixed in as well, so it is less dense and it probably does not have a solid inner core like Earth has. The temperature difference between the center of the core and top of the core is not great enough to create the huge convective currents needed to then create a global magnetic field that would protect Mars’ atmosphere from being blasted away by the solar wind.

In exoplanet news, the large radio observatory in Chile, ALMA, has acquired the first image of a   dusty circumplanetary disk surrounding a forming planet. The Jupiter-sized planet is in the PDS 70 system about 400 light years away. The disk will probably eventually form moons, so the system will provide a nice laboratory to test our ideas of how moons form just as the many circumstellar disks ALMA has imaged around young stars are helping us understand how planets form.

Speaking of dust: the Earth has begun moving through the dust trail left behind by Comet Swift-Tuttle to create the Perseid meteor shower. We’ll reach the densest part of the stream the night of August 11/12 and we’ll be blessed with a thin waxing crescent moon that will set early. No moon to wash out the view. Let’s hope that the sky will be free of fire smoke!

The more people we can get vaccinated, the less evolutionary playground we give the COVID-19 virus to innovate and make new variants, so check out myturn.ca.gov for the clinic closest to you and please continue wearing a mask when with large groups in enclosed spaces! 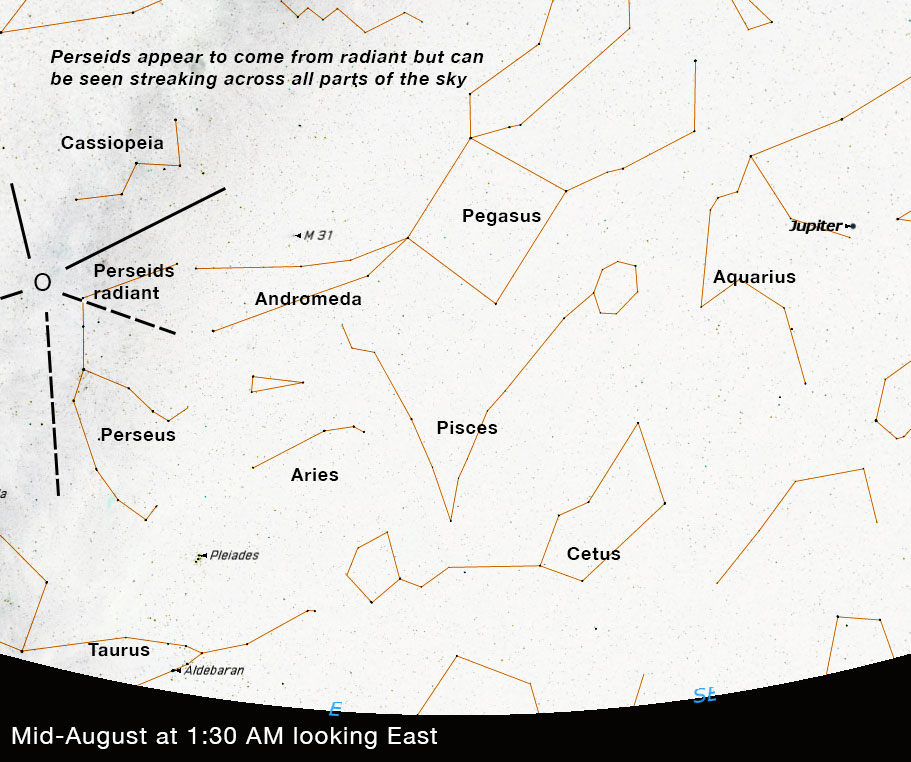