This is my first column during the “shelter-in-place” time which is a necessary thing in order to keep the number of COVID-19 serious reactions from growing too quickly for our health care system to treat. Bakersfield College continues with instruction but it’s all online. We were able to do so because way back in January, we paid attention to the public health experts that the coronavirus was going to be something very serious for the country. In late February, BC activated its emergency conditions protocol to prepare for the eventual move to shutting down the physical campus. A lot of workshops and coaching by the academic technology folks enabled us to put just about every course online. The perspective of “you do what you have to do” coupled with intelligent, creative employees means we even have science lab classes still being taught. I encourage you to check out BC’s response to COVID-19 at www.bakersfieldcollege.edu/covid19 for an example of how to “play where the puck is going to be” to use a metaphor from hockey god, Wayne Gretzky.

Well, the “shelter-in-place” still allows us to go outside and enjoy the night sky in our backyard or in remote locations far from other people. In tonight’s evening sky, Venus is now two days past its very close passage by the Pleiades star cluster in the shoulder of Taurus in the west. April third was the closest passage by the Pleiades in decades. The next time Venus passes by the Pleiades will be eight years from now. Tonight they are still close enough together to fit within the field of view of standard binoculars. Opposite Venus in the east is a waxing gibbous moon just two days from full moon phase.

The more interesting action is happening in the early pre-dawn morning sky with Mars, Saturn, and Jupiter in that order in the southeast. Mars passed by both of the Jovian planets in March and now the trio are spaced almost equidistant from each other between Sagittarius and Capricornus. Mars will continue to move away from Jupiter and Saturn all this month. The third quarter moon will form a nice arc with the three planets about 20 degrees across (length of your outstretched hand opened up wide at arm’s length) on April 14. The moon will be spending the next couple of nights moving past the trio as it shrinks to an ever-thinner waning crescent.

April 2020 is the thirtieth anniversary of the Hubble Space Telescope. It was launched on April 24, 1990 on the Space Shuttle Discovery mission STS-31. The Hubble Space Telescope was first proposed 44 years before that in a white paper by Lyman Spitzer. Major space missions can take decades from conception to launch partly because there is so much technology and engineering techniques that have to be invented.

Soon after Hubble was put in its 340-mile high orbit, it became apparent that something was wrong with its optics. The images were not as sharp as they needed to be to do the cosmology science. The images were still sharper than what we could do from the ground, so science research still continued while we waited for the first servicing mission in December 1993 to install corrective optics. Hubble has had 5 servicing missions with the last one in 2009 to install new batteries and other science instruments. With the retirement of the Space Shuttle fleet, there will be no more servicing missions.

A nice overview of Hubble’s accomplishments is given in the Night Sky Network’s March 24 webinar posted on their YouTube channel at www.youtube.com/user/NightSkyNetwork/videos . All of the videos are free, no subscription needed! Just the thing for these shelter-in-place times.
—
Nick Strobel
Director of the William M Thomas Planetarium at Bakersfield College
Author of the award-winning website www.astronomynotes.com 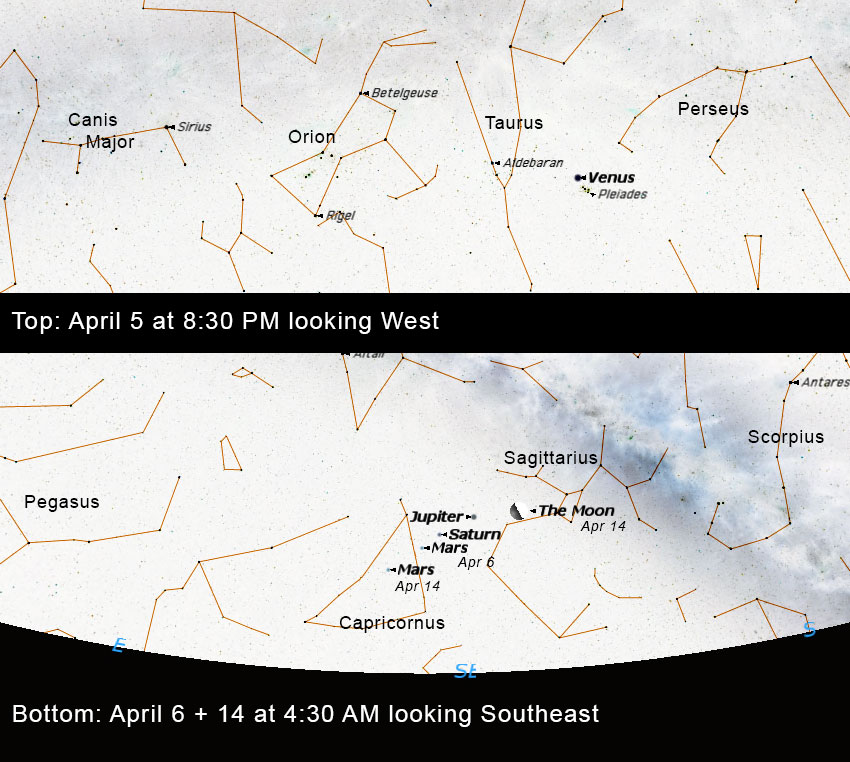