Happy Easter! This is the last day of BC’s spring break and after a few vaccination clinics at BC (with several more this coming week) and everyone 16+ years old eligible for vaccination starting April 15th, there’s reasonable hope that we’ll be able to have face-to-face hybrid classes starting in the summer.

Sometime this week we might see the Ingenuity Mars Helicopter take flight. The NASA news item said that April 8 was the earliest that an attempt would be made. On another part of Mars, the Curiosity rover continued its exploration of the Mount Sharp formation in Gale Crater. NASA recently released several images including a 360-degree panorama and selfie. Curiosity is now entering an area with sulfate-rich minerals that might reveal what happened to Mars as it transitioned from the warm, water-rich world to the super-cold desert world of today.

One other piece of good news is that the non-negligible chance of the Near-Earth Asteroid Apophis hitting Earth in 2068 has been reduced to zero. Apophis is about 1100 feet long with a mass of over 20 million tons, so an impact would be “not good”. Earlier in March, Apophis passed by Earth at a comfortable 10.5 million miles which was close enough to ping radar off it to more precisely determine its orbit. Usually, astronomers use the huge 305-meter Arecibo radio telescope to ping Near Earth Asteroids when they pass close but with its collapse last December, the task fell to 70-meter dish at NASA’s Goldstone facility 120 miles east of Bakersfield along with help from the 100-meter Green Bank Telescope in West Virginia. When Apophis passes within 19,500 miles of us in 2029, it will be bright enough to see without a telescope.

Just over a week ago the Event Horizon Telescope team, that brought us the first picture of a black hole a couple of years ago, released new images of the supermassive black hole at the heart of the giant elliptical galaxy M87. These images show the black hole in polarized radio light which enable us to map out the magnetic fields in the region immediately outside the black hole. The magnetic field controls how gas flows into the black hole, as well as, powers the jet of charged particles squirting out many thousands of light years. The data indicate the gas surrounding the black hole is relatively thin and the magnetic field is strong enough to significantly reduce the inflow of gas.

Another recent astronomy news story shows how the novelty of exoplanets has worn off. Two astrophysicists published a paper describing how exoplanets could be used to detect dark matter. Rather than focusing on the properties of exoplanets themselves, Rebecca Leane and Juri Smirnov have figured out a way to use exoplanets as probes of another great mystery in astronomy.

Dark matter is the stuff that does not respond to light like ordinary matter does but only interacts solely by gravity. It makes up the majority of matter in the universe with five times the amount of mass in dark matter than ordinary, visible matter. We don’t know of what it is made, so the “dark” is also an indication of our knowledge level.

Anyway, Leane and Smirnov figure that enough dark matter particles could accumulate in the cores of the largest exoplanets to collide and annihilate each other, making gamma rays and ordinary particles that would heat up the giant exoplanets. The new large infrared space telescopes coming online soon, the James Webb Space Telescope launching later this year and the Nancy Grace Roman Space Telescope launching in 2025, would be able to measure the temperatures of suitable exoplanets.

The exoplanets would need to be ones that are billions of years old to have cooled off as well as being far from their parent star. Those are among the toughest exoplanets to find but we will find more over the next decade. Since the density of dark matter is greater closer to the galaxy center, if we find that the temperatures of the old, giant exoplanets increases for those closer to the galaxy center, that “would be a smoking gun for dark matter”, according to Leane.

In the bit less speculative realm, our evening sky has Mars now between the horns of Taurus in the western sky (see the star chart below). Orion is tipped downward, so the belt stars run horizontal, parallel to the ground. Bright Sirius shines in the south. Venus is now on the east side of the sun, so we’ll see it in the evening later this spring. It is currently too close to the sun to see it as the evening star but by the end of the month, you might be able to spot it just after sunset.

Tonight, the moon is a thin waning crescent visible between the stars of Sagittarius and Capricornus in the southeast at around 4 a.m. Saturn rises about half an hour later followed by Jupiter forty minutes later. Saturn is in the middle of Capricornus and Jupiter is at the tail end of Capricornus. Mercury is just west of the sun but too close to the sun to pick it out in the pre-dawn twilight. Start looking for a thin waxing crescent moon low in the west in the evening sky after April 11. 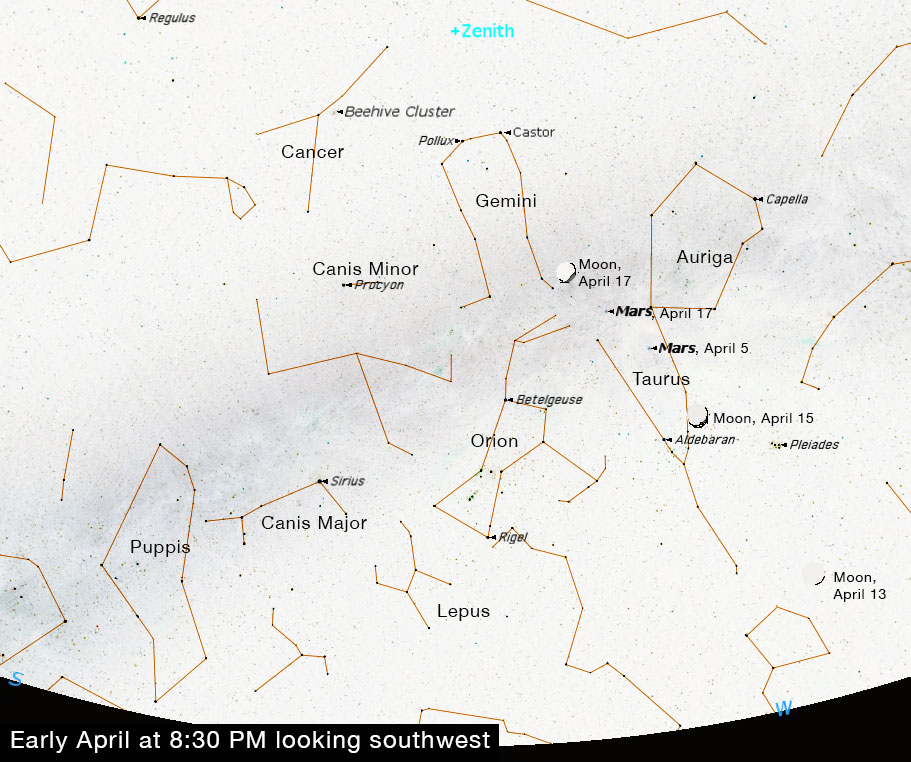