Another great confirmation of Einstein’s Theory of General Relativity came with the release of the first real image (not simulation) of a black hole on April 10. The discovery even made the front page of the Californian (well, the image did with details inside). The first confirmation of Einstein’s General Relativity happened just a month and half shy of a century ago when a solar eclipse on May 29, 1919 was used to show the bending of starlight around the sun by the amount predicted by Einstein. That observation also made the front page of newspapers around the world and made Albert Einstein a household name.

The Hubble Space Telescope imaged the disk of swirling gas surrounding the black hole in 1994, finding that it was aligned perpendicular to the narrow, collimated jet of super-hot plasma emitted from the core. That jet had been detected as long ago as 1917, so we’ve known for quite a while that M87 has something strange at its core. The Hubble Space Telescope’s superior resolution was required to image the gaseous accretion disk and take spectra of various parts of the disk to show its speed increased in just the way expected of material orbiting a super-compact object of at least a few billion solar masses. That put the proposal of there being a supermassive black hole at M87’s center on very firm ground. But Hubble’s resolution was much too poor to image the black hole itself. That required an array of telescopes the size of the earth.

The Event Horizon Telescope uses observations from eight radio telescopes in six locations: Hawaii, Arizona, Mexico, Spain, Chile, and the South Pole. Astronomy is one of the few human endeavors remaining where there is true international cooperation. Sheperd Doeleman (Center for Astrophysics, Harvard & Smithsonian) led the team of over 200 researchers in 20 countries that took the data and crunched the numbers to create the image with a resolution equivalent to observing an orange on the moon from Earth. The orange on the moon illustration is from an excellent TEDx talk by computer scientist Katie Bouman who developed the key algorithms used to assemble the data into one coherent whole. Because there are a huge number of ways possible to combine the data due to having just a few telescopes across the globe sampling the light instead of having the entire Earth covered with radio telescopes, she had to create a way that would produce the most likely image with the least bias from our pre-conceived ideas as possible. As she describes in her TEDx talk, she was able to prove that the bias in the image is essentially zero. An extra bonus of her talk is that no math is required to understand it, so take a look at www.ted.com/talks/katie_bouman_what_does_a_black_hole_look_like .

The dark hole in the ring of light in the image is similar to a “shadow, caused by the gravitational bending and capture of light by the event horizon,” according to Heino Falcke, chair of the EHT science council. The event horizon is the point of no return for anything, including light, from escaping the black hole. The shadow of the black hole is the closest we can come to an image of the black hole itself. The event horizon is about 2.5 times smaller than the shadow it casts and measures just under 40 billion kilometers across (about three times the diameter of Pluto’s orbit). That shows that in the grand scale of things, our solar system is super-tiny!

The EHT team is working on data from observing the supermassive black hole at the center of our galaxy, Sagittarius A* (Sgr A* for short). Because the event horizon of Sgr A* is about a thousand times smaller in diameter than M87’s black hole, there are faster changes in the light from the swirling gas in the accretion disk around Sgr A*. All that turbulence makes discerning the shadow signature harder to do. Stay tuned to eventhorizontelescope.org for more developments!

Here in our weaker gravity field, pre-dawn observers will see bright Jupiter above the tail of Scorpius and Saturn further east to the left of the Teapot part of Sagittarius. Venus is much lower in the east rising in the morning twilight. Evening observers will see Mars continue its right-to-left trek through Taurus. 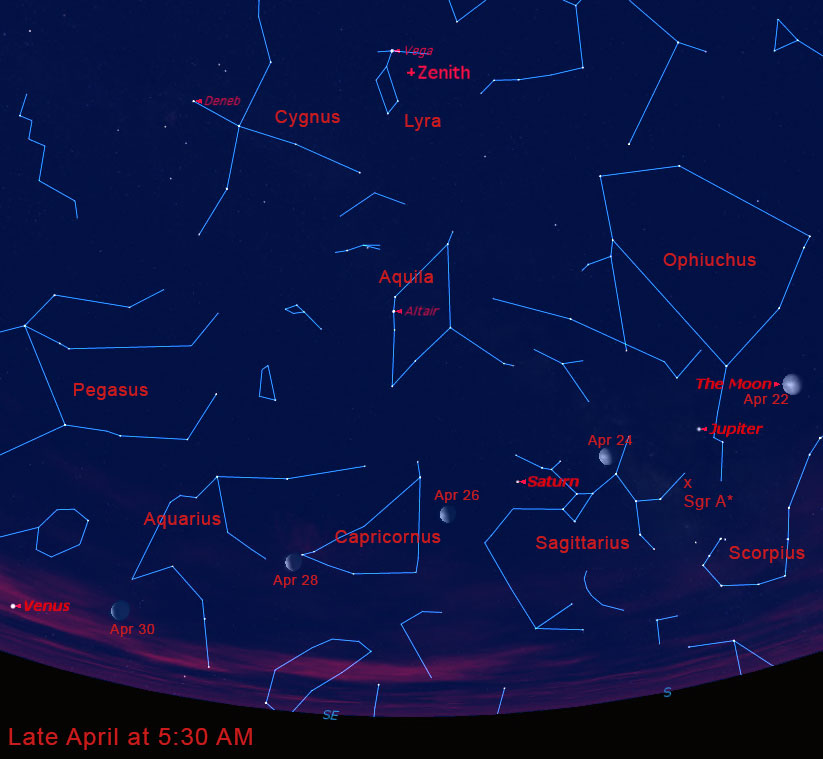