Online instruction continues at Bakersfield College and we just finished the first week after Spring Break which was the third week of the entire college instruction being online (not counting Spring Break). Learning continues!

I just finished an article about the impact of SpaceX’s Starlinks broadband internet satellite network on astronomy. With the April 16 launch, there are now 420 of the satellites up in orbit and there will eventually be 1584 satellites in the first phase. Later phases of the network will have 12,000 or more in low-Earth orbit. It is going to become impossible to do research astronomy from the ground because the sunlight glinting off the satellites will leave too many streaks across the image for us to see beyond the clutter. The satellites will be brighter than most of the stars and other objects that the telescopes will be pointed toward. While there’s talk about using some sort of umbrella to shield the satellites from the sun, the satellites are solar powered, so how do you shield the satellite from the sun and still get sunlight to reach the shiny solar panels? Also, the umbrella is going to reflect some sunlight itself. There is also the problem of the satellites radio frequencies leaking into those used by the microwave and radio telescopes, including the Atacama Large Millimeter/submillimeter Array. All of the radio noise from thousands of Starlink satellites is going to hinder astronomy in the radio band.

At least the Event Horizon Telescope which uses an array of radio telescopes spread across the Earth was able to complete its observing run before the Starlink satellites were launched. Having an earth-sized radio telescope array means they can see details as small as an orange (navel) on the moon. The Event Horizon Telescope is the one that took the radio picture of the supermassive black hole in the core of the giant galaxy M87 we all saw a year ago. The EHT team released another set of pictures last week from the 2017 observing run (it takes 2-3 years to process the data). This set of pictures shows radio jets shooting out of a different supermassive black hole— the one powering the distant quasar 3C 279, 5 billion light years away. The supermassive black hole has a mass of a billion times that of the sun.

With this new much sharper imaging ability, we see the jet is twisted at the base by some process that has astronomers scratching their heads in confusion. Perhaps the black hole is dragging spacetime around itself as the black hole spins and twisting the jet. Maybe the jet is somehow rotating itself internally. Maybe the magnetic field surrounding the black hole is all twisted up. There will be more “maybe” ideas proposed over the next several months or years. The EHT observing campaigns happen only during March and April but the 2020 campaign had to be canceled due to the CoVID-19 pandemic. Still a lot of data to analyze from the 2018 observing run.

In tonight’s sky the moon is a thin sliver of a waning crescent as the moon heads towards new moon phase on the night of April 22/23. The day before new moon, the Lyrid meteor shower will be at its peak. The Lyrid meteor shower happens when Earth runs through the dust trail left behind by the comet C/1861 G1 Thatcher and the tiny dust bits hit our atmosphere at 30 miles/second. I think our rain is done for the season, so hopefully the skies will be clear. The next meteor shower will be the Eta Aquarids that peak on the night of May 5/6 as Earth runs into the dust trail left behind by Comet Halley.

Already very bright in the west after sunset, Venus is going to reach maximum brightness at the end of the month. Venus is catching up to Earth in its inside faster orbit, so even though Venus is appearing as a thinner crescent in a telescope (showing more of its night side to us), the crescent has a larger angular diameter which means more light is reaching us. A thin waxing crescent moon will be next to Venus on April 26 (see the star chart below)

Earth is catching up to the outer planets, Mars, Jupiter, and Saturn, so they are also getting brighter in our early morning sky in the southeast. At the beginning of the month, they were close together in our sky but now Mars has moved well to the left of the two giants. Jupiter and Saturn are now about 90 degrees away from the sun, so we see their shadows cast far to the side. It will be especially noticeable when looking at the shadow of Saturn cast on its rings. 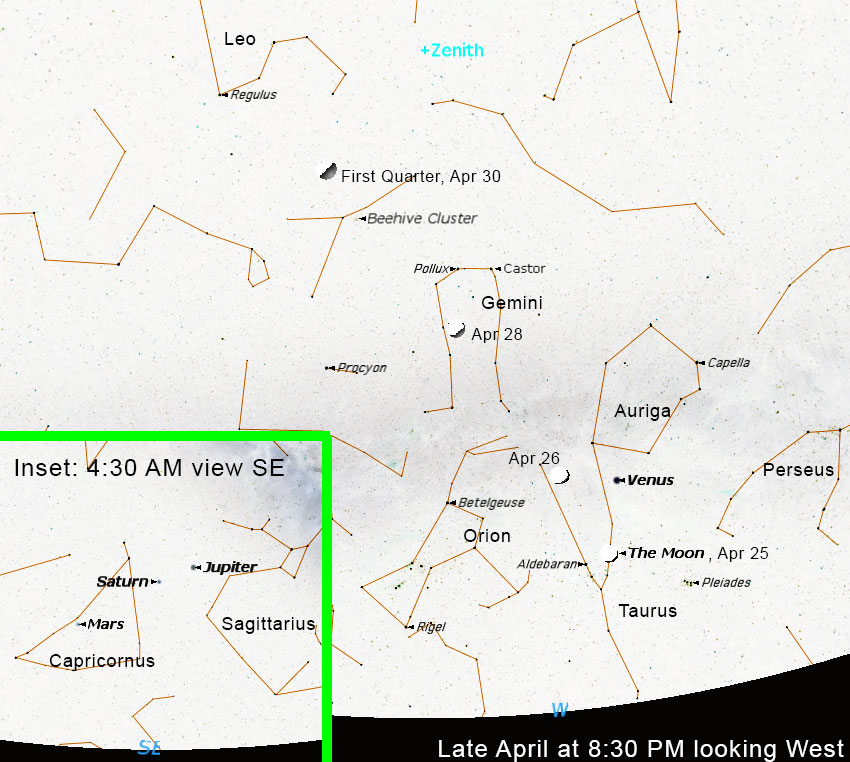