The Ingenuity Mars Helicopter is poised for its first flight on Mars. In my last column, the earliest date for the test flight was April 8 but the test flight had to be postponed to this week or later due to problems in sequencing in the flight computer when it went from pre-flight mode to flight mode during its full-speed rotor spin test on April 9.

A number of factors go into timing when to do a test flight. The solar-powered craft has to warm up and recharge its batteries from the extremely cold martian night that is -130 deg F but early enough in the day for it to re-charge its batteries after the test flight to stay warm during the night. Also, we want to fly it when the winds are calmer. Finally, the Perseverance rover will be watching Ingenuity from about 50 to 60 meters away during the test flights and providing the data relay between Ingenuity and the orbiters which then relay the data back to Earth but Perseverance already has a packed agenda of other scientific exploration going on. Therefore, there is quite a bit of coordination needed with the other science teams. The sweet spot time for a test flight is about 12:30 p.m. Mars time. The winds have been averaging just 6 meters/sec (13 mph) at that time.

About four hours after the test flight, the data will be relayed back to the eager engineers on Earth. The first flight will be a simple hover of 3 meters above the surface, rotation to take a picture of Perseverance, and landing straight back down. All this in about 40 seconds and hopefully avoiding the engineering event called “rapid unscheduled disassembly” (i.e., a crash landing). The first downlink of data will have a picture from the black-and-white navigation camera, laser altimeter, and other engineering data. The following day’s downlink will have the color picture from the 13-megapixel camera looking toward Perseverance and the horizon. Images from the Mastcam-Z cameras on Perseverance will be included in that data downlink and the next day’s data downlink.

Because of the limited bandwidth, Perseverance’s Mastcam-Z picture rate will be just 7 frames per second but only a few of those frames are sent back during each downlink. The next test flight will be four days later and successive test flights of heights up to 5 meters high and greater horizontal motions will be 3 days apart, each one pushing the envelope to see what flying on Mars is really like. Ingenuity will have up to 30 days of 5 test flights to try everything out before it will be retired, so Perseverance can get back to its main mission of looking for signs of past life in Jezero Crater on Mars.

What makes flying on Mars so difficult? Mars’ surface air pressure is less than one percent the Earth’s surface air pressure or equivalent to 100,000 feet altitude on Earth. Commercial jets flight at about 35,000 feet altitude and the highest helicopter flight on Earth got up to about 41,000 feet. Furthermore, Mars’ atmosphere is primarily carbon dioxide with a molecular weight of 44 amu while Earth’s atmosphere is primarily nitrogen with a molecular weight of 28 amu which might have different turbulence properties when swished about by two counter-rotating rotors moving at 2400 RPM. Also, Ingenuity has to power two 1.2-meter span rotors, have enough smarts to fly autonomously, take pictures with two cameras and get data from a laser altimeter all crammed within a package that is less than 1.8 kg (4 pounds) in mass. Go to https://mars.nasa.gov/technology/helicopter/ to learn more about Ingenuity and the team of over 140 people involved in designing and building Ingenuity. Hundreds more are involved with the various instruments on Perseverance.

In our evening sky Mars is in the west just above the horns of Taurus and drawing nearer to the feet of Gemini (see star chart below). By the end of the month, Mars will be at the right edge of Gemini. Tonight the moon is a fat waxing crescent in the middle of Gemini. The moon will be first quarter the night of April 19 and full phase on the night of April 26. Tonight is the first night that you might be able to see Venus as the evening star very low in the west just after sunset. Venus will be easier to see later in the spring and summer. Later in the month, on April 25 you’ll see Mercury next to Venus and shoot past Venus toward its greatest distance from the sun (“elongation”) in the middle of May.

Jupiter and Saturn continue their prominence among the stars of Capricornus in the pre-dawn hours. Saturn will be visible by about 3:30 a.m. and Jupiter about 40 minutes later. The morning of April 22 will be the peak of the Lyrid meteor shower but a bright waxing gibbous moon is going to wash out many of them. Tiny bits of Comet Thatcher will streak across our upper atmosphere at 30 miles/second to make up the meteor shower. 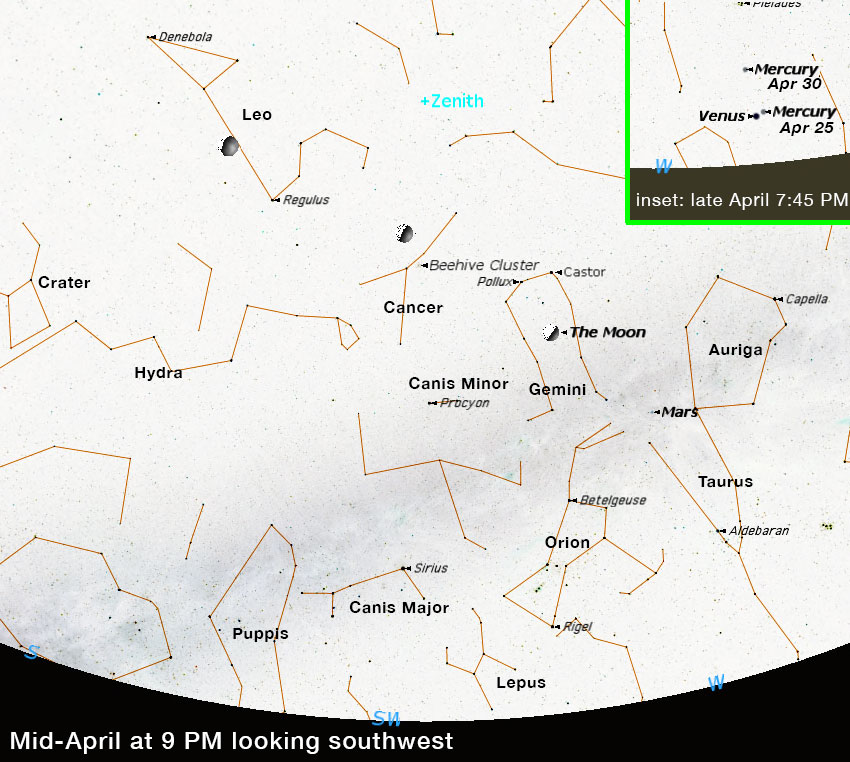