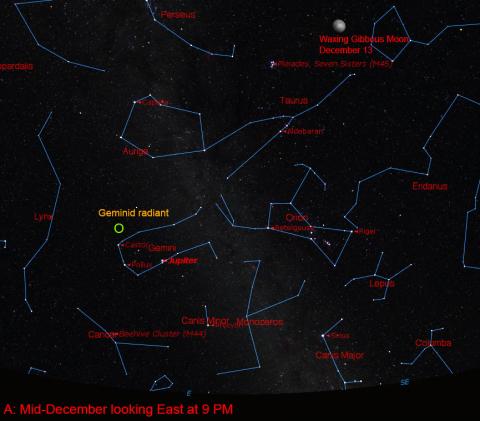 In my previous column I talked about the ices in Comet ISON's nucleus acting like a glue holding the chunks of dust, dirt, and rock together. As I write this it looks like enough of Comet ISON's ices evaporated as it zipped by the Sun on Thanksgiving to break the nucleus apart into a rubble and dust pile. Comet ISON's nucleus was less than a mile across so there wasn't that much ice available to survive getting within just 683,000 miles of the Sun's surface. Also, the tidal stresses from the Sun's strong gravity at such a close distance stretched the nucleus to the breaking point. There might still be a tail of some sort coming from gas and dust coming off the rubble pile but it won't be visible without a decent telescope on a dark sky.

Although, ISON is essentially gone, it was a great boon to the astronomers who study comets since it was the first comet that was observed from nearly the orbit of Saturn to within a solar radius of the Sun's surface. There was to be a post-perihelion (after closest Sun distance) workshop on December 6th to present what the astronomers had learned since the August Comet ISON Observer's Workshop and plan for post-perihelion observations. Well, most of the post-perihelion observations are out but there will still be plenty to talk about since a comet like ISON comes around once every 200 years. There will be plenty of other comets gracing our skies over the coming years, of course, but a fresh one coming from the Oort Cloud for the first time and getting so close to the Sun is quite rare.

In our evening sky Venus shines at its brightest now as it catches up to Earth in its faster orbit around the Sun. Venus will be the very bright star low in the southwest after sunset. It will be set almost three hours after sunset. Through binoculars you may be able to see Venus as a thin crescent phase. When Venus is near the horizon, its light can get refracted all about to make it appear to change color and brightness quickly, causing it to sometimes be confused with a UFO (of the spacecraft variety). Farther up in the southwest will be a fat Waxing Crescent Moon. First Quarter phase is on Monday.

Brilliant Jupiter rises soon after Venus sets. Jupiter is on the Pollux side of Gemini (bottom edge as seen when Gemini is rising in the northeast). By 8 PM Jupiter and the rest of Gemini should be up high enough to easily see. The two bright stars at the heads of the Gemini twins are Castor and Pollux. As Gemini is rising, Castor is higher up than Pollux and both of them will be to the left of Jupiter. Slightly above Castor as Gemini is rising is the radiant of the Geminid meteor shower. The night of December 13th-14th is the peak of the Geminids with a meteor from the shower visible every minute or so on average on a dark sky far from any city lights. The Moon will be in a Waxing Gibbous phase by then, just three days from Full Phase. Although the radiant of the shower is near Castor, meteors can be seen anywhere in the sky. More meteors will be seen after midnight when the Earth has rotated Kern County to face in the direction of the Earth's orbital motion. Also, after midnight, it will be possible to put the Moon behind you as you face east away from it. The Moon will set around 4:30 AM, so you'll probably spot even more meteors after then. Last year there were quite a number of meteors visible from the shower in the two nights prior to the peak. It will probably do that again and the Moon will set even earlier the nights before December 13/14. Whichever night you decide to observe the meteors, be sure you bundle up with multiple layers!

The Geminids are the dust trail left behind the asteroid 3200 Phaethon which is actually a now-dead comet. All of its volatiles (easily vaporized materials) have long since been boiled away leaving a hunk of rock and dust. The bare rock continues to crack and crumble as passes near the Sun. The Earth passes through Phaethon's dust trail every mid-December. The rock bits hit our atmosphere at about 36 kilometers per second (that's 80,000 miles per hour) and burn up many tens of miles above the surface. As the Earth plows into Phaethon's debris trail, the meteors appear to come from a particular spot in sky, a geometric effect much like the parallel rails of a train track converging at a point in the distance. While you're observing meteors, enjoy the brilliant stars of Orion, Canis Major, Taurus, and Auriga.