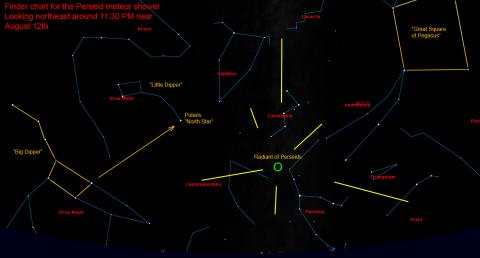 The first half of August this year will be a good one for observing meteor showers. The thin Waning Crescent Moon tonight rises very late, around 5 AM in the morning, and it will not wash out any meteor trails. On August 6th, the Moon will be at New Phase it won't be at First Quarter until the morning of August 14th. That means we should have great conditions to enjoy the tail end of the Delta Aquarid meteor shower in the early days of August and the more famous Perseid meteor shower that peaks on the nights of August 11/12 and 12/13.

Meteor showers happen when the Earth runs into the dust trail left behind by a comet. As a comet nears the Sun in its elliptical orbit, it warms up and sheds pieces of itself along its orbit. Most of the pieces are tiny dust grains the size of of a grain of sand or smaller. If the Earth passes through the comet's orbit, the dust grains can hit the Earth's atmosphere and burn up above the stratosphere several tens of miles above the ground. More meteors should be seen after midnight because the California part of the Earth is facing the direction of the Earth's orbital motion around the Sun. Comet bits moving at any speed can hit our atmosphere. Before midnight, the California part of the Earth is facing away from the direction of orbital motion, so only the fastest moving comet bits can catch up to the Earth and hit the atmosphere. The same sort of effect explains why your car's front windshield will get plastered with insects while the rear window stays clean.

The meteor showers appear to be coming from a particular direction in the sky so the meteor showers are named after the constellation they appear to be coming from. The divergence from a point in the sky (called the "radiant") is from the same geometric effect you see of straight railroad tracks or the edges of a straight road spreading out toward you from a distant point far away on the horizon. The Perseids appear to diverge from the Perseus constellation and the Delta Aquarids appear to diverge from near the delta star of Aquarius (see the second chart below). The first star chart below shows the radiant for the Perseids which will be above the horizon by about 10 PM on August 11th and 12th.

The Delta Aquarids are most likely from Comet 96P/Machholz and peak at the end of July. Even at best there will be just 20 meteors per hour on a very dark night for the Delta Aquarids and those in the southern hemisphere will have a better view of them (during their winter season).

The famous Perseids are from Comet Swift-Tuttle. The bits of comet debris hit our atmosphere at 37 miles per second and the bits tend to be a bit larger than those for other meteor showers so the Perseids can be especially bright with long trails. Those bright long trails and usually comfortable summer night viewing conditions make them to be a favorite of most people. The Earth is expected to pass through the thickest part of the Swift-Tuttle dust trail for the hours centered on 12 noon Pacific Time on August 12th. Therefore, the pre-dawn hours of August 12th and 13th will probably be the best showing. On the night of August 11/12th, the Waxing Crescent Moon will set by 10:20 PM and by 11:00 PM on the night of August 12/13th, so the Moon won't be washing out the sky during the best observing times of after midnight to the dust of dawn. Somewhere between 60 to 70 meteors per hour may be seen. The Perseids will be active several days before and after the August 12-13th peak dates.

For meteor observing you want to be at least 20 miles outside the city and metro area and preferably out of the valley and its dusty air. However, if you're stuck in the city, still give the Perseids a try since the brightest ones will be visible with the street lights. No binoculars or telescope are needed. In fact, you will miss most (or all!) of the meteors if you use them because binoculars and telescopes zoom in on one small piece of the sky. The meteor streaks will cover a broader piece of the sky than the widest field possible with binoculars. Also, you will see more meteor streaks out of the corner of your eye because your eyes have greater light sensitivity around the periphery of your vision than in the center. If you want to be a part of the international meteor count during the Perseids, check out the International Meteor Organization's website at www.imo.net. Let's hope there are no clouds or forest fire smoke blocking our view! The following Saturday (August 17th) will be the free public star party put on by the Kern Astronomical Society.