BC Selected for Citizen Leadership Center 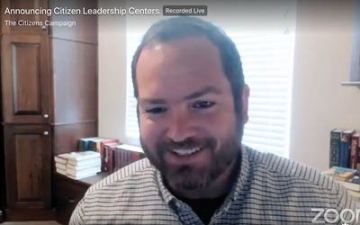 This morning, the Citizens Campaign announced Bakersfield College as one of the 10 locations nationwide to establish a Citizen Leadership Center. These centers, primarily at Community Colleges, aim to give citizens the tools and know-how to exercise their power beyond the ballot, equipping them with the pragmatic, problem solving skills needed to work together despite their political differences.
Professor of Political Science at BC, Allen Bolar, participated in the live streamed announcement from The Citizens Campaign this morning. He said, “Developing new leaders who know how to work with people with whom they disagree and are skilled at identifying practical solutions is essential if we are to successfully address our local and national challenges. Those are the skills that our Citizen Leadership Center will impart to our students and interested members of the communities we serve.”

These pioneering Citizen Leadership Centers will pave the way for a new National Public Service, designed to add a new dimension to America’s historically paternalistic, top-down mode of leadership. Citizens who work together at these Centers can help solve our nation’s problems by developing and advancing their own evidence-based proposals while upholding a high standard of service. Over the next two years, the Citizens Campaign plans to establish an additional 100 Leadership Centers.

The Citizens Campaign is a community of citizen problem-solvers dedicated to adding a citizen driven dimension to our Country’s leadership capacity and to restoring service, civility and pragmatism to America’s political culture.

Watch a recording of the announcement media conference.

Story picked up by:
Associated Press: The Citizens Campaign Launches Initiative to Add a Citizen Driven Dimension to American Leadership