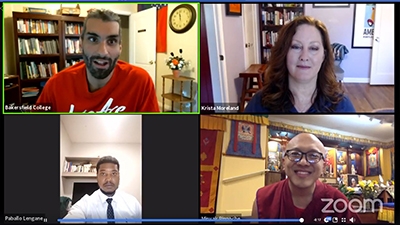 On July 14, 2020, as part of BC’s Gandhi series, Krista Moreland, professor of Anthropology, hosted a virtual talk honoring the birthdays of two of the world’s great leaders and peacemakers: Nelson Mandela and His Holiness the 14th Dalai Lama. She stated that “the actions and words of these men have inspired individual and societal change”. Professor Moreland went on to note that both men have endured hardships and injustice, both were awarded the Nobel Peace Prize for using peaceful means to fight against injustice and human rights violations, and both recognized the value of education. Her introduction concluded with a powerful quote from Mandela, “Education is the most powerful weapon which you can use to change the world”.

This program, livestreamed on Facebook, had two speakers, Paballo Lengane, a University post-graduate student in Pretoria, South Africa; and Minyak Rinpoche, a Buddhist monk, currently at the Tashi Gomang Dharma Center in Kentucky. The presentations were inspiring and insightful, highlighting the importance of compassion, kindness, reconciliation and peaceful protests to enact positive change.

Paballo gave a holistic view of Mandela, discussing the political, personal, and philanthropic aspects of his life. He shared Mandela’s fight to free South Africa from the racial segregation of apartheid, beginning with his activism with the African National Congress (ANC) in the 1940s. Mandela believed in using peace and education to enact change, but was also military trained in case he needed to defend himself. The government response to anti-apartheid protesters was harsh, with many arrested and many killed in the fight to end injustice. A tipping point was the Rivonia Trial (1963-64), where Mandela and other anti-apartheid leaders were put on trial for treason.  Paballo shared a quote my Mandela given in 1964 during the Rivonia Trail, one that is inspiring and that has been immortalized in South Africa  - “I have fought against white domination, and I have fought against black domination. I have cherished the ideal of a democratic and free society in which all people will live together in harmony and with equal opportunities. It is an ideal for which I hope to live for and to see realized. But if it needs to be, it is an ideal for which I am prepared to die”.

We also learned about Mandela the person, including his relationship with his wife Winne who was an activist in her own right, and Mandela’s brief but unsuccessful boxing career.  Mandela did see the power of sports to unite people and foster equality. He always focused on unity and reconciliation as the way to peace. Paballo shared that it took Mandela three attempts to finish his LLB as being a Liberator often means your own dreams come second.  His dedication to equality and freedom led to end of apartheid, and Mandela became the first democratically elected president in South Africa beginning a new era in the country.

Professor Moreland introduced Minyak Rinpoche by discussing the hardships the monastery in India is facing during Covid since the monks cannot travel to raise funds and provided a link to the Tashi Gomang Dharma Center should anyone wish to help. She included a quote from the Dalai Lama, “World Peace must develop from inner peace. Peace is not just the mere absence of violence. 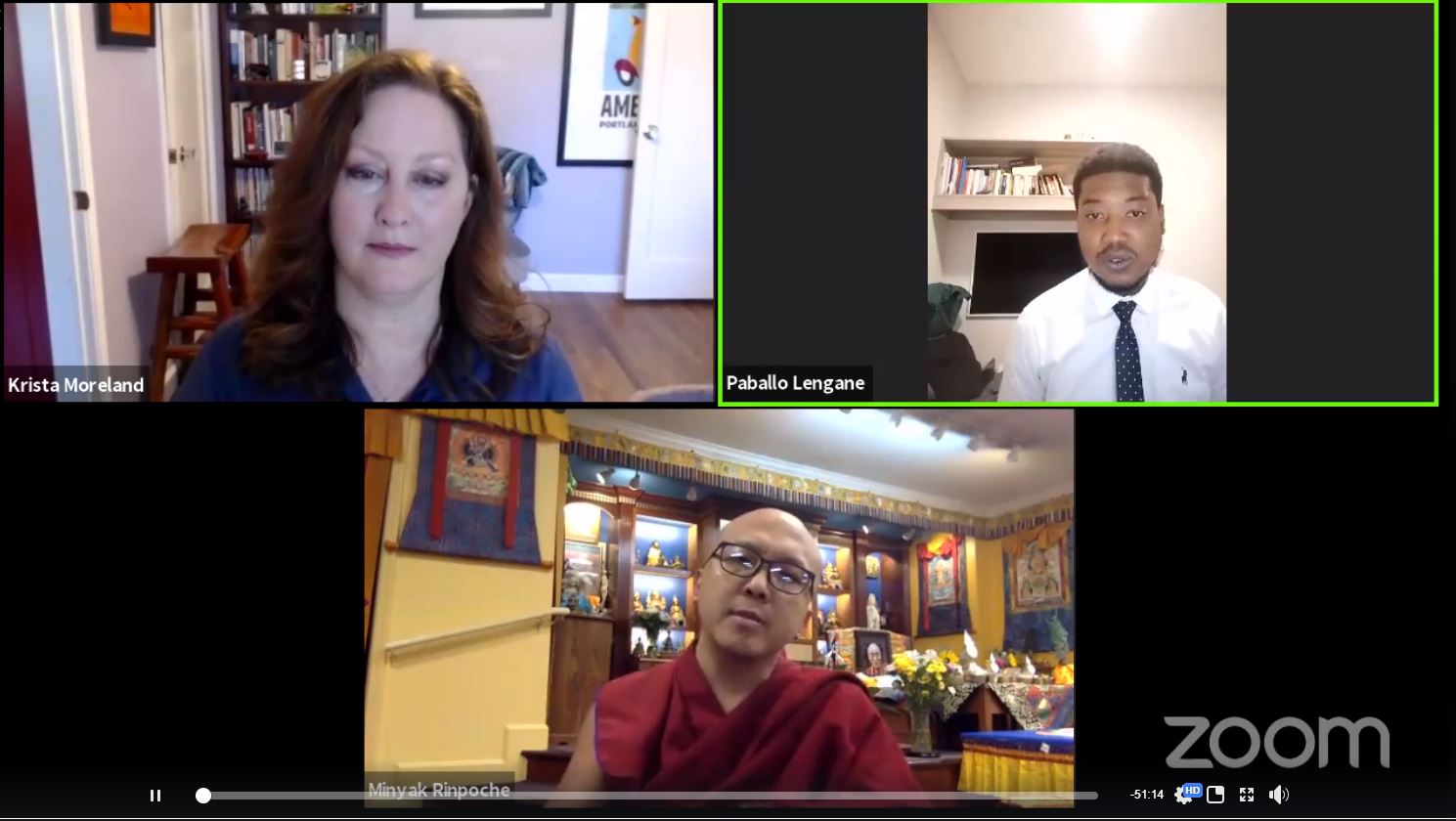 Rinpoche began with His holiness the Dalai Lama’s being recognized as the 14th Dalai Lama at age three, and his ascension to the throne at age sixteen. When His Holiness committed himself to serving the people, he lost his personal freedom. He began studying as a child and received his PhD in Buddhist Philosophy at a young age. His Holiness was still young when China invaded and occupied Tibet in 1959, sending the Dalai Lama into exile in India. Tens of thousands of Tibetan refugees have joined him in India, where His Holiness has worked to ensure his people can provide for themselves, go to school, and children can learn Tibetan culture, while continuing to fight for Tibetan people in Chinese occupied Tibet. His Holiness believed that non-violence is the only way to fight for freedom, never allowing violence against the Chinese.

Rinpoche explained that a peaceful world comes from more than good wishes and prayers, these must be combined with altruistic and positive actions. Inner education is as important as external education. We need to cultivate inner peace through practicing compassion, tolerance, and forgiveness before we can cultivate world peace. His Holiness teaches that we are all human beings, we all want to be happy and we all have the potential for inner peace through love, kindness, and compassion which will lead to world peace. This includes protecting the environment and working to reduce climate change. World peace begins with each of us developing inner peace, with our acts of compassion and kindness in our daily lives. As Rinpoche says, ““He [His Holiness the Dalai Lama] encourages people that everyone can do something if you practice, if you learn about compassion. And if you can change yourself, you shouldn’t need for someone to change you. You can do it yourself by cultivating compassion and love and kindness”.  We all have the seed of compassion within us, and for this ability to manifest we need to regularly practice compassion. Many small actions can lead to great change.

On July 6th, His Holiness the Dalai Lama turned 85 years old. Rinpoche said Tibetans honor his birthday by dedications for a long life and seeing this as a reminder to follow in his footsteps and work for humanity, harmony, and peace. His Holiness, believed to be the manifestation of the Buddha of Compassion, asks that people practice compassion for his birthday, that it is the best gift he could receive. July 18th is Mandela Day, the celebration of Mandela’s birthday. Paballo shared how important this day is to South Africa.  It is honored by everyone spending 67 minutes doing something for others, which represents the 67 years Mandela devoted to fighting for human rights and his philanthropic work with soup kitchens, blanket drives, and education. July 18th is a day to us and focus on others as Paballo explained. It’s a day to give back, to forgive, celebrate one another, help others, and work towards Mandela’s dream of a Rainbow Nation with equality for all.

We are thankful to our guest speakers Minyak Rinpoche and Paballo Lengane for such an engaging and insightful discussion. And hope that viewers were inspired to practice compassion and kindness. And as Paballo so eloquently stated, we need to “encourage relationships between people and to have a rainbow nation and that is only achieved through reconciliation and being honest with one another”.