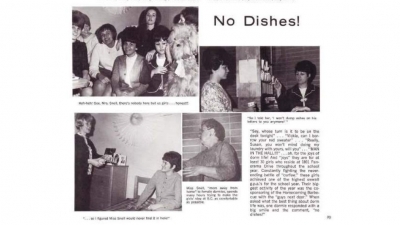 In the 1960s, the Home of the Renegades was a literal home for many of our students who lived on campus. The dormitory for men was behind the Campus Center and had their own live-in maid named Eleanor. The women’s dormitory also had a live-in “den mother” named Miss Snell. The two houses were active in student activities and had their own associated fraternities and sororities.

Read the following passages from the 1966 Raconteur for a deeper look into the era of student housing on the Panorama Campus.

AMR… “Living” it Up Away From Home

A.M.R. is the fraternal order of thirty male dormies who reside behind the campus center. These students, who have the luxurious joy of sleeping until ten minutes before class and then setting a new outdoor record for “residence-hall-to-humanities” dash, are from all over Kern County.

Their intramural record is one of which they’re especially proud. They shut out every one of their opponents in football and scored some 300 points against them in 10 games, until the last one, which they lost 7-6 to take the second place trophy home.

In conjunction with the female of their species, the dormies successfully took over the Homecoming Barbecue. A spring carnival booth and steak bake added to the dorm unity. Any spare time left over after attaining the necessary 1.75 GPA and the “no curfew” policy for the guys came under the heading “favorite dorm activity: sleeping.”

“Say, whose turn is it to be on the desk tonight”...”Vickie, can I borrow your red sweater”...”Real, Susan, you won’t mind doing my laundry with yours, will you”... “MAN IN THE HALL!!!”...ah, for the joys of dorm life! And “joys” they are for at least 30 girls who reside at 1801 Panorama Drive throughout the school year. Constantly fighting the never-ending battle of “curfew”, these girls achieved one of the highest overall GPAs for the school year. Their biggest activity of the year was the co-sponsoring of the Homecoming Barbecue with the “guys next door”. When asked what the best thing about dorm life was, one dormie responded with a big smile and the comment, “no dishes!”

Other times by appointment.