Theme: Water in Art and Mythology 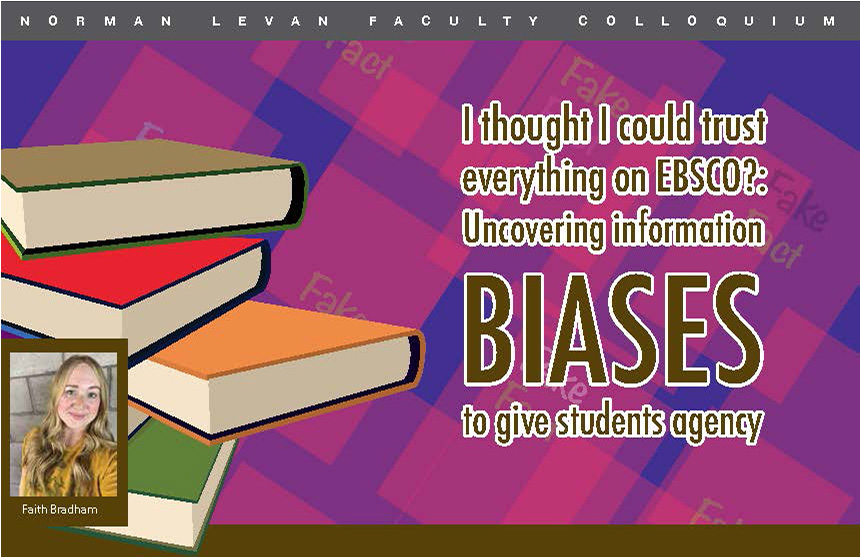 Many students hold the false belief that the information they find in their academic research is inherently unbiased or neutral, but, as faculty, we know this is not the case! Different hierarchies exist within information's creation and dissemination that can affect issues such as the type of information that is published, how findable that information is within library databases, and more. Join us for Professor Faith Bradham's lecture focusing on ways for faculty of any discipline to help students understand these research-related issues, giving students greater agency as they complete the research they need to do throughout their academic careers.

For more information or to request accommodations in advance, please contact Erin Miller.

Faith Bradham is a Reference Librarian & Professor at Bakersfield College. Originally a Texan, she obtained her Master’s of Library Science from Indiana University in Bloomington before moving to the West Coast. As a community college librarian, her role extends into reference, instruction, liaisonship, and outreach. Her research interests focus on critical librarianship and inclusive teaching practices. When she’s not in the library, Faith can be found on one of California’s many beautiful hiking trails. 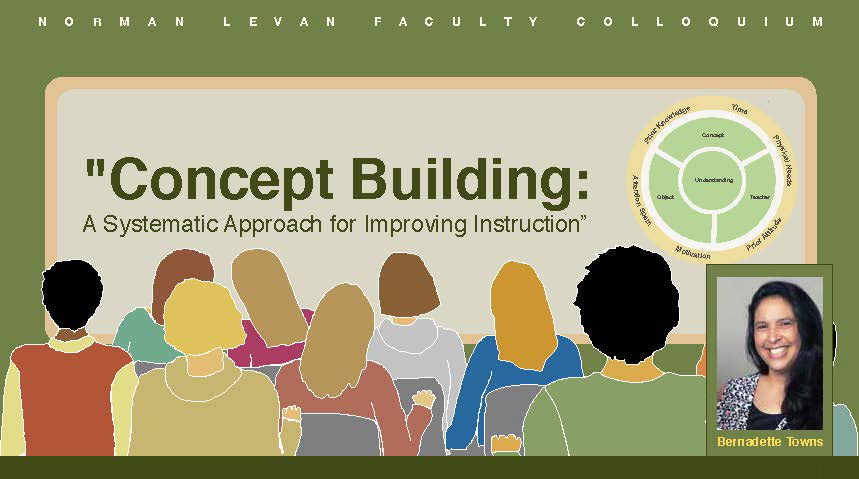 Developed through extensive research and study, as well as over twenty years of teaching experience, The Concept Building System Theory unveils an innovative approach to facilitate a deeper level of understanding in the classroom. Join Dr. Towns as she takes participants on an interactive and thought-provoking journey that is designed to enrich instruction of any subject at every level. Each individual will be challenged to evaluate current teaching strategies and will have the opportunity to explore practical ways to incorporate the System Theory into personal instruction.

Caribbean food will be served during the event, and no registration is required.

For more information or to request accommodations in advance, please contact Erin Miller.

Bernadette Towns has been a Professor of Child Development at Bakersfield College since 2000. She holds a Master’s in Curriculum and Instruction and a PhD in Education with an emphasis on Technology. Bernadette has worked in education for over 25 years and has taught at every level from infant care to college. Dr. Towns has trained and presented at numerous educational conferences throughout the United States, Europe, and China on various educational topics: like concept building, developmentally appropriate practices, and cultural harmony. For the past three summers Bernadette has worked in China, training adults in western educational theories and teaching children English by utilizing the concept building approach. Are you look for love, joy, wisdom, inspiration, connection, or advice? Then listen to the animals. And if you don't? According to the fairy tales around the world, you are doomed!

Animals give us unconditional love, inspiration, wisdom, guidance, and joy - all elements vital to living a full and happy life. The enduring influence and importance of the human/animal relationship, both to ancient people and cultures and to our 21st Century lives, is examined through stories and scholarship from myth, fairy tale, literature, science, popular culture and life. Rae Ann will discuss how to avoid doom, and instead appreciate timeless animal wisdom as it applies directly to our own lives through the appearance of the animals that share our homes, backyards, and the wilderness.

Vegetarian food will be served during the event, and no registration is required. For more information or to request accommodations in advance, please contact Reggie Williams.

Rae Ann Kumelos holds a Ph.D. in Mythological Studies, a Masters in Literature and Mythology, and a B.S. degree in marketing. She has written both academically and as a columnist in a variety of national publications about the human/animal relationship in myth, literature, astronomy and popular culture, and lecture at various conferences, including Oxford University. her radio program, Voice of the Animal, is broadcast on Sirius XM Satellite Radio and recorded by the Commercial Music program at BC. Her 2016 book, "Wild Wisdom: Animal Stories of the Southwest", received a national award as gift book of the year. Rae Ann grew up in Bakersfield, and lived in beautiful destination places in Arizona, New Mexico and California Gold Country for many years before returning home in 2012 to teach English and Mythology at Bakersfield College. AI is increasingly affecting all of our lives. It now seems likely that machines may soon actually attain sentience, or at least act as though they were as sentient as you or I. Automation will certainly continue to eliminate jobs at an accelerating rate.

The ethical ramifications of this technology are vast and will be increasingly pertinent. Our very species' survival may well hang in the balance. But whether you are terrified at imagined dystopias this technology may engender, or excited by utopic visions of the future this technology can make possible, artificial intelligence is evolving at an exponential rate. The day of the sentient machine is coming, whether we like it or not.

Though it may sound like science fiction, deep learning is an engineering reality right now.

Decades ago, Rafael was advanced to candidacy for a PhD in mathematics from UC Irvine, and was awarded an MS in mathematics. Parallel to his interest in mathematics has been a lifelong interest in artificial intelligence, and in the past few years this interest has become an increasingly focused study. Last December, Rafael completed his MS in ComputerScience with a machine learning specialization at Georgia Tech, and this past summer he pursued research at the Graz University of Technology Institute of Computer Graphics and Vision, applying deep learning to problems in computer vision. Now, as Rafael nears retirement after teaching mathematics at BC for almost 30 years, he's considering going for a PhD in machine learning, focusing on deep learning.

Dr. Ronald Kean will discuss his composition process in three recent commissions including a live performance of the Bakersfield College choirs singing, “Follow the River/The Journey of Harriet Tubman.” This is a five-movement work that incorporates eight African American spirituals in a West African musical framework. “The White Birds,” by W. B. Yeats, is composed in a traditional Irish musical style. “The Rose That Bare Jesu” is a setting of a 14th century English poem using antique style features. These techniques will be discussed and demonstrated in a presentation that is dedicated to the artist in all of us.

Dr. Kean is a highly-published composer, sought after clinician, and frequent guest conductor. He retired from Bakersfield College in 2013 after teaching Choir and World Music for 19 years. He received the Shirley Trembley Distinguished Teaching Award in 2013, the Norman Levan Scholar of the Year Award and the California Music Educators Association Multicultural Educator of the Year Award in 2006. His passion is conducting and composing music that honors the diversity of Bakersfield College. This is partially the reason for six commissions from professional, university, and high school choirs in the last two years. Colonial American food will be served

Erin discusses how Absalom Jones and Richard Allen obtained their freedom, fought to uplift free blacks by establishing the first black self-help fraternity and African Church, led relief efforts during the Yellow Fever Epidemic of 1793, and defended blacks from attacks upon their character.

She also explored their subsequent realization that race, not virtue, would define citizenship in the New Republic.

Most importantly, she extolled Jones' and Allen's refusal to allow others' definitions of them to define their self-perception and behavior.

Joe Saldivar, Ph.D., is a proud faculty member and current faculty chair of the BC Biology Department. His primary professional goal is to provide students with the tools to think critically and encourage and foster their imagination to find answers to problems facing the future our community and humanity.

Homo sapiens are landlocked. With human population estimations at 11-15 Billion people by the year 2100, how will humanity resolve these environmental and political concerns?

When Jerry Ludeke began working in the Bakersfield College Archives in 2002, and going through materials from and on Miss Grace Van Dyke Bird - Bakersfield College's first president - she joined the ranks of those who were in awe of this Renaissance woman. Jerry has consulted numerous sources, including the BC Archives, UC Berkeley's Bancroft Library, and Grace Bird's family. By walking us through Miss Bird's photo album and life, Jerry hopes that we will be amazed at how multi-faceted she was and grateful that Bakersfield College was so fortunate to have been directed and nurtured for 31 years by this awesome woman.

Each semester the Norman Levan Center for the Humanities awards $1,000 to $2,000 scholarships to eligible students, who major in a humanities or science discipline and who write an outstanding essay on a topic related to the humanities. The essays are between 750 and 1,000 words in length and are judged anonymously by a committee of BC administrators.

There are currently no events.