Barry Scheck is known for years of landmark litigation that set the standards for using DNA evidence in courts throughout the country. Drawing from his nationwide movement to re-examine the fairness and efficacy of our criminal justice system, Scheck discusses how scientific evidence can prove that a convicted person is factually innocent.

The Innocence Project started in 1992, a national litigation and public policy organization dedicated to reforming the criminal justice system to prevent injustice. Scheck and the organization have used DNA evidence to exonerate almost 300 wrongfully imprisoned people, many of whom were on death row or had been incarcerated for decades. Scheck and his work with The Innocence Project were the basis for the TV drama The Divide.

In Actual Innocence: Five Days to Execution and Other Dispatches from the Wrongly Convicted, Scheck exposed the mishandled evidence and coercive interrogations that plague the legal process. Publisher’s Weekly called the book “an alarming wake-up call.”

In October 2010, Scheck and The Innocence Project were featured in the feature film Conviction. The film retold the true story of a Betty Anne Waters (played by Hilary Swank) and her quest to free her innocent brother from prison. After putting herself through college and law school, Waters joined with the Innocence Project to seek the DNA testing that would free her brother. Peter Gallagher played the role of Scheck.

A DNA expert with the O.J. Simpson defense team, Scheck has represented notable clients including Hedda Nussbaum, Louise Woodward and Abner Louima. More recently, Scheck served as counsel to wrongly accused Duke University lacrosse player Reade Seligmann in a civil lawsuit filed against the city of Durham, North Carolina. He has covered the Oklahoma City bombing and other trials for NBC News.

A Commissioner for the New York State Forensic Science Review Board and Professor at the Cardozo School of Law at Yeshiva University, Scheck is considered to be one of the 100 most influential lawyers in America. His honors include the Thomas Jefferson Foundation Medal in Law, the National Association of Criminal Defense Lawyers Robert C. Heeney Award for recognition of outstanding contributions, and the New York State Association of Criminal Defense Lawyers—Thurgood Marshall Award. 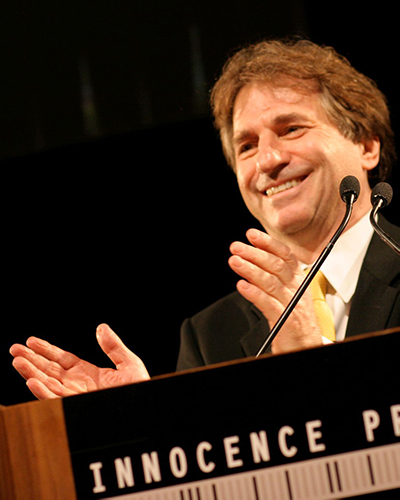 Faculty Coordinator: Reggie Williams, Professor of Philosophy.
Brought to you in collaboration with the Levan Institute as part of the Distinguished Speaker Series.