The Women's History and More Committee organized this event, featuring Dolores Huerta and members of her family hosting a screening of the PBS Independent Lens documentary about her life at the Panorama Main Campus. Adjunct Librarian Allison Burch moderated a group watching the event at the Delano Campus, who were able to view the discussion via livestream and ask questions from DST 118.

The Delano Campus Cultural and Historical Awareness Program (CHAP) participated in a black history month event at Allensworth State Historical Park, the only state park in California dealing exclusively with the history of African Americans. Professor Oliver Rosales, Paula Parks and Michelle Hart, as well as librarian Elisabeth Sundby, led the group along with Ph.D. candidate Laura Hooten from UC Santa Barbara, an expert on rural African-American history in the area between the US and Mexico borders.

Delano CHAP coordinated with the Office of Student Life and the Library's Cerro Visiting Author series to livestream Dr. Dyson's presentation about Martin Luther King, Jr. to the Delano Center. This discussion - which was conducted in English and Spanish with the assistance of moderator Octavio Barajas, an adjunct history professor at BC - featured author Gabriel Thompson discussing his 2016 book about California Migrant workers, as well as Valerie Gorospe of the Center for Race, Poverty and the Environment and Delano Center Interim Director Abel Guzman. Librarian Elisabeth Sundby and volunteers also collected historical artifacts and recorded the stories of Delano residents to digitize in a community-based archive that will be available for future use by students and researchers.

This event was sponsored by the National Endowment for the Humanities. A Life In Politics: Discussion Panel

A political panel of field representatives for state and national leaders shared their insights into the workings of political office. Speakers also shared about what drives them to work hard every day behind the scenes as staff members in the public sector; where they are now and where they want to go; and most importantly, the issues that are important now and in the future.

"Miss Representation", written and directed by Jennifer Siebel Newsom, examines the ways that media is able to create cultural norms and spread messages that disparage women and girls, undermining their ability and desire to lead and feel powerful. After the film, religion and philosophy professor Susane Langham moderated a discussion with members of the audience.

Exploring the Nahuatl and Mesoamerican Cultural Legacy, Past and Present

Ridgeview High School counselor Salvador Garcia gave an engaging talk about his 20-year career researching pre-Columbian art and symbolism in Mesoamerica. After intensely studying the Aztec calendar system and the Aztec's Nahuatl language, Salvador developed a deep knowledge and appreciation for the indigenous heritage of the Mexican people, as well as Mesoamerican history in general. At the end of Garcia's presentation, audience members asked about questions about the legacy of the Nahuatl people and their influence on Mexican culture, as well as parallels between Mesoamerican calendars and the Gregorian and Julian calendars of ancient Europe. 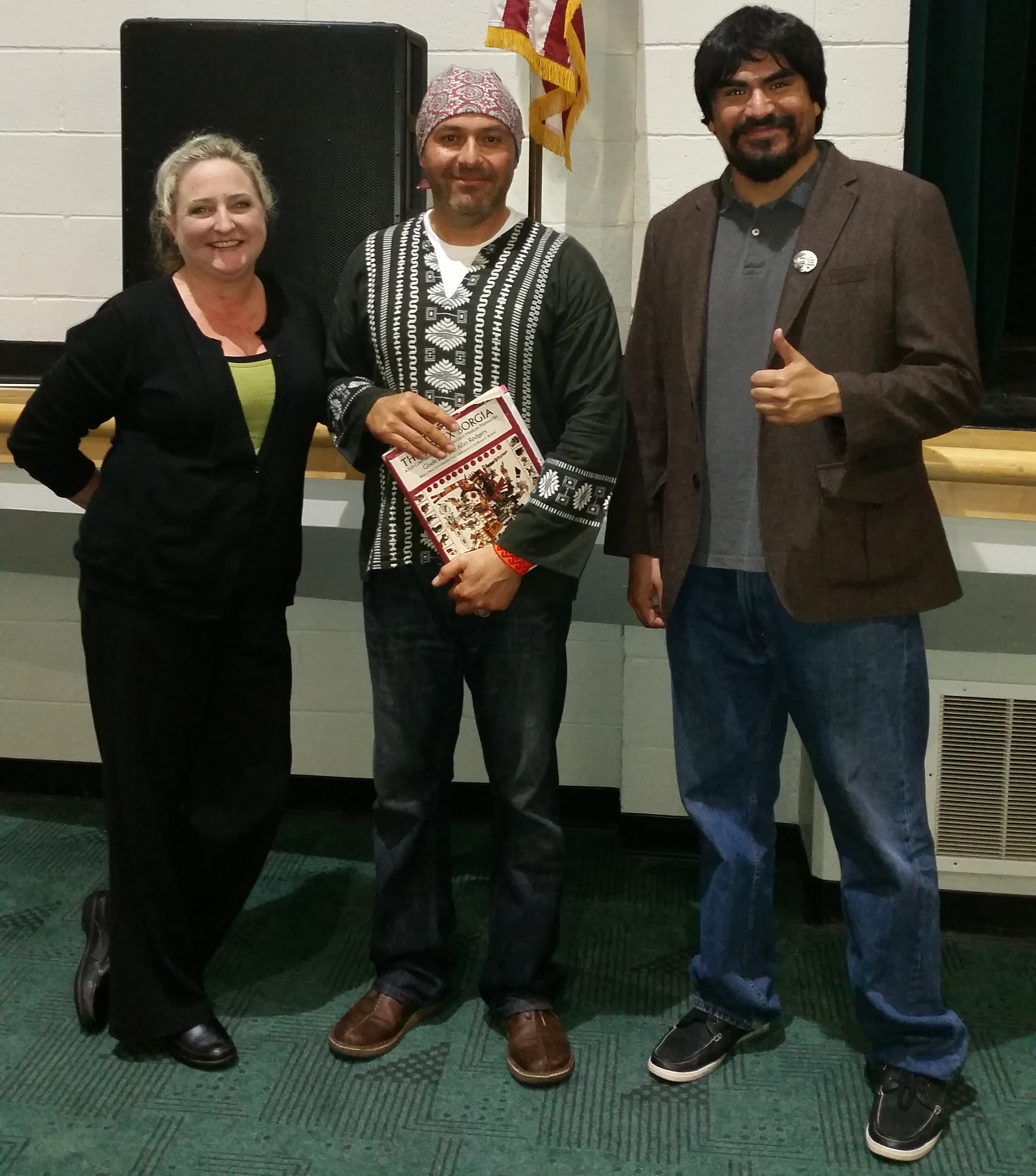 As a child of migrant parents, Salvador Garcia has experienced two vastly different worlds: his life in Mexico, and his life in the USA. His exposure to both countries has allowed him to have a more balanced perspective on life, and he's learned how to make the best out of both worlds.

This event featured two professional working within the fields of environmental justice and academia, doing critical work on the intersection of civic and engagement and social justice issues in rural California and the Central Valley. Panelists presented on their work and discussed issues and perspectives relevant to the lives of Central Valley residents. The panelists also answered question after their presentation.

A student-led information session was held before the November 2016 elections in order to increase voter participation and civic engagement. the event informed participants about the importance of civic engagement and the issues on the 2016 ballot that would impact our communities. Our guest speaker Moises Duran, Equality Organizer of the Dolores Huerta Foundation, also answered questions from the audience after the discussion.

This event was sponsored by BC's Office of Student Life, the BC Student Government Association's CCA Grant, and the Dolores Huerta Foundation.

In 1994, while attending a reading by Filipino-American poets in the Bay Area, Patty Enrado first heard about Agbayani Village in Delano, the retirement home built in 1974 by the United Farm Workers. Thus began her journey of learning about the Filipino-American contributions to California’s farm worker movement – a buried piece of history few people have heard of. In her research, Patty also delves into her family and community history, and in writing her debut novel, A Village in the Fields, she brings to light and honors the immigrant stories of her relatives and her Filipino-American community.

This event was funded by the BC Student Government Association's CCA Grant. Patty was born in Los Angeles and raised in Terra Bella, Calif. She has an AA from Porterville College, a BA in English from the University of California at Davis, and an MA from Syracuse University’s Creative Writing Program. She writes about health information technology for a healthcare industry media firm and lives in the San Francisco Bay Area with her husband and two children.

A History of Allensworth in Local, Regional and International Context

A panel discussion was held with Steve Ptomey, Park Interpreter III, Park Manager, Allensworth State Historic Park, Michael Eissinger, Ph.D. Candidate, World Cultures and History, University of California, Merced, and Laura Hooton, Ph.D. Candidate, History, University of California, Santa Barbara in which they discussed African American Migrations in the American Far West & U.S.-Mexico Borderlands: A History of Allensworth in Local, Regional, and International Context. The event was well attended by students, staff, and community members. Discussion began with the history of Allensworth SHP, followed by the history of African American communities throughout the Central Valley, and ending with information about the communities that were created in Southern California and into Mexico.

This event was organized by Michelle Hart, Assistant Professor of Academic Development and co-chair of CHAP and was sponsored by the Bakersfield College Cultural and Historical Awareness Program (CHAP), Delano Campus Foundation, Office of Student Life, Social Justice Institute of Bakersfield College, and Friends of Allensworth Committee.

BC history professor Dr. Oliver Rosales organized a special screening of the PBS film "Latino Americans: Peril and Promise (1980-2000)", followed by a panel discussion. The event was sponsored by the American library Association, the National Endowment for the Humanities, BC Social Justice Institute and BC Delano Center CHAP.

Community leaders Liz Morris, Janet Rabanal, Larissa Portillo, and Ricardo Chavez participated in a panel on how to promote change in Delano.

The Tuskeegee of the West: Education and the History of Allensworth State Historic Park

George Finley spoke about the history of Allensworth State Historic park, including his own experiences as a teacher in Allensworth, and the importance of education. George Finley was born in Alabama where he attended elementary and high school. He graduated from Tuskeegee University with a B.S. degree and then was drafted in the United States Army and served in the Korean War. After being discharged from the Army, Mr. Finley settled in Fresno and was employed by North American Aviation before obtaining a position with Allensworth School District in Tulare County. He worked at the Allensworth school for ten years before moving to the Fresno Unified School District to work as an elementary school teacher. After a year and a half in the classroom, he moved to the newly established office of Human Relations where he was instrumental in setting up the first Human Relations Program for Fresno Unified School District. After two years with the Human Relations Department, Mr. Finley moved to the Department of Student Services as a Truant Officer where he remained until his retirement in June, 1991. It's Written in the Stars: Calculations and Confrontations along the Nineteenth Century US-Mexico Border

Celeste Menchaca, a Ph.D. Candidate at USC's Department of American Studies and Ethnicity, gave a talk broadly discussing the US-Mexico border and its production in the 19th and early 20th centuries.

Since the passage of the Secure Fence Act of 2006, the United States has fortified the U.S.-Mexico border with additional fencing, lighting, military gadgets, unmanned aerial vehicles, and state-of-the-art surveillance cameras. The technologies of sight that inform the material and imagined production of the current U.S.-Mexico boundary line, however, have an extensive history, one that begins well before the 21st century and even before the creation of the Border Patrol in 1924. Menchaca explored the emerging relationship between science, technology, vision, and border production during the second half of the 19th Century.

A screening of the historical documentary "The Delano Manongs" aired with director Marissa Aroy, followed by two presentations - UC Davis professor Robyn Rodriquez talked about Filipino Americans who participated in the Great Grape Strike of 1965, and San Francisco State University professor Dawn Mabalon talked about her upcoming biography of . The event was sponsored by the BC Delano Center and the Library's Cerro Visiting Author program.

A Refuge For His Race: Allensworth, Preservation, and Historical Memory

Your Place in Words: The Individual's New Responsibility in the Southern Central Valley Through History and Writing

Nick Belardes, a local author and historian, gave a talk about his career in writing and research. Dr. Kimberly Hoang, a Bakersfield native and Assistant Professor of Sociology and International Studies at Boston College, gave a talk on her book "Dealing in Desire: Asian Ascendency, Western Decline, and the Hidden Currencies in Global Sex Work". Steven Ptomey: A Town Founded On A Dream

Steven Ptomey, a State Park Interpreter III and Park manager at Allensworth State History Park, spoke about the history of Allensworth, from its founding in 1908 to it rediscovery in the 1970s.